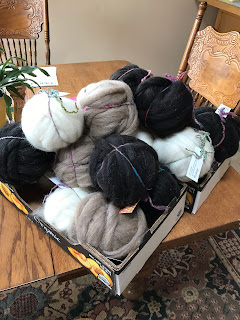 I ended up not sharing a booth with Laura who was going to sell roving so I made 2-ounce bumps from three pounds of our natural-colored Shetland roving with a sign inviting buyers to a "Mix and Match" spinning experience.  I sold ten bumps and a friend from Arizona has said she'll buy all of my remaining colored roving, about three pounds.  It's freeing and at the same kinda bittersweet, the end of an era.  Don't get me wrong.  I have probably five bins of white Shetland and colored merino processed roving. 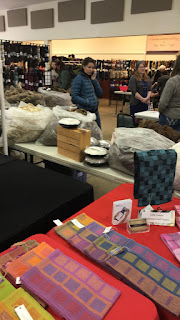 This was my booth and the only shot I took of it.  It actually was reasonably attractive but after the icy drive that morning, I thought I'd have all the time in the world for pictures and focused instead on my drop spindle.  I didn't expect much in way of sales so I thought I'd practice for the Museum this summer, talking and spinning at the same time, and also using it as an opportunity for fiber education
I had two astounding experiences that day. One woman commented on my towels, asking me if I had gotten the draft from the Handwoven article a while back. I said that actually I had, that the pattern was mine, I’m the author. She got so excited, was happy to tell me that she got first place in her county fair using my pattern and that she had credited me. Goosebumps!

A couple of ladies visited with me later, one was buying a tartan scarf, and the other, looking through my inventory asked me if I had sold scarves last fall at the guild’s Christmas sale. It turns out that she had bought an 8-shaft huck-lace scarf from me that she loves. She told me that the reason she just joined the guild was because she wanted to learn to weave like that for herself. More goosebumps!!!! 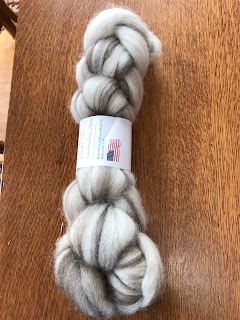 I surprised myself by buying this 3-ounce sliver of Cheviot roving.  I'm actually interested in spinning again, just like that after such a long hiatus.  I'll overdye it with Gaywool dyes when it's yarn. 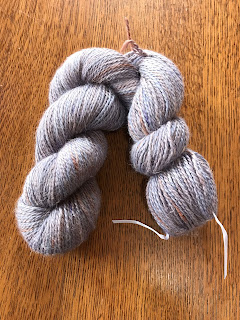 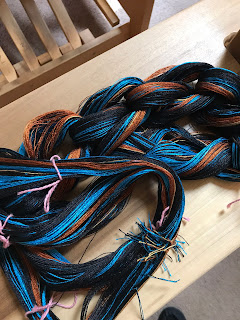 Once again I'm taking a break from weaving towels.  I'd like to focus on what I learned in the tartan class and am playing it safe so far.  This is the fiber challenge yarns in a Campbell of Breadalbane warp.  I made mistakes and am so glad I chose a tartan that I know and also because I was warping from the front, I was able to make corrections while sleying.  I'm at the threading stage but yard work is beginning to enter into my daily schedule. 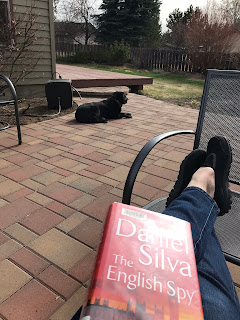 Yesterday was such a nice day that I planted about 60 winter bulbs that Ian bought from Costco last year and that I never got in the ground.  I recently read that it's better to plant them than risk losing them.  Two hours later I decided that was enough yard work for one day.  The day was still lovely so I checked the library catalog to see if they had a copy of the next Daniel Silva in the series I'm reading.  They did so I trotted the four miles down to pick it up and devoted the rest of the afternoon to reading in the nicest day we've had this year.  As you can see, books are high in my list of priorities.
Posted by Sharon at 3:57 PM