Ending a trip and getting ready for the next one 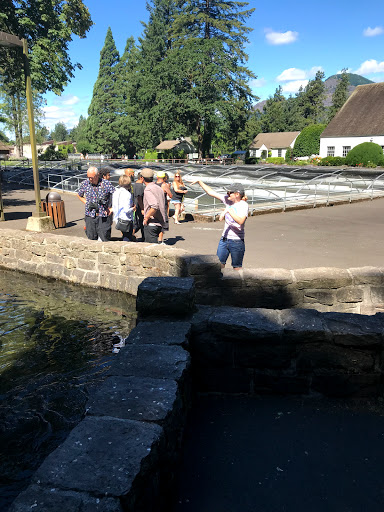 We decided to drive home on Hwy 84 through the Columbia River gorge so we could stop at the Bonneville fish hatchery which is just below the Bonneville Dam.  It’s a huge facility and the most of ponds were filled with 4” baby fish.  Big fish happen in the fall.  We were surprised when a blue heron took flight from one of the cages near us and landed on another cage before taking flight.  I had no idea they were so huge!.  Alexia was entertained by feeding the trout, then told us that her hands smelled like fish! 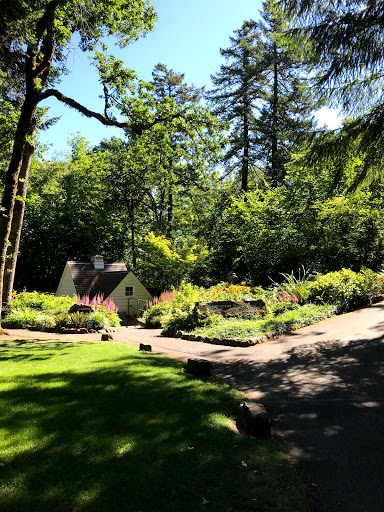 The grounds are well manicured, absolutely beautiful and very unhatchery like.  This little house holds the viewing window so you can watch the sturgeon swim in their pond. 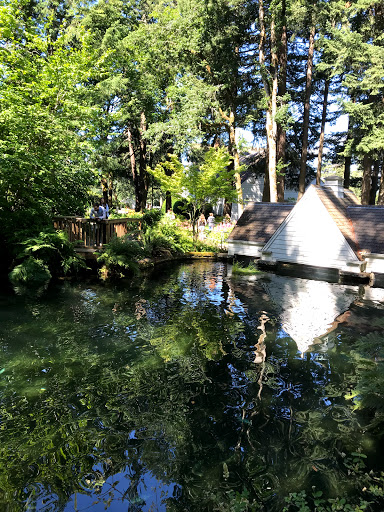 Reflections on the Sturgeon Pond. 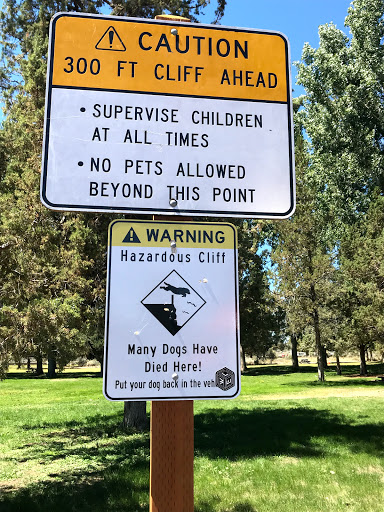 We stopped at the Peter Skene Ogden rest stop so see if anyone was bungee jumping.  It’s a very steep and deep canyon. 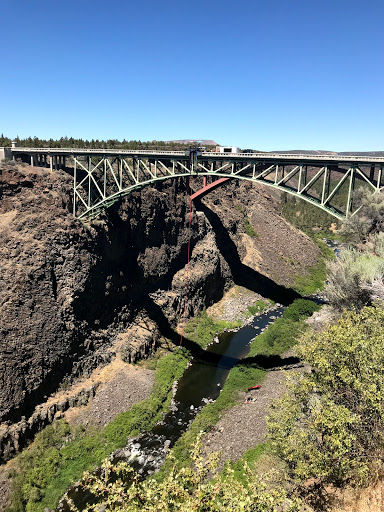 There were jumpers and there’s someone at the bottom of the bungee in fact. This gorge was cut by the Crooked River. 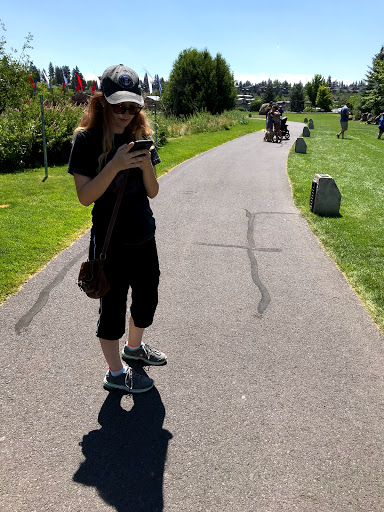 Alexia plays Pokémon and wanted to go down to the Old Mill District Sunday afternoon for the Community Pokémon day and also their celebration of two years as a game. 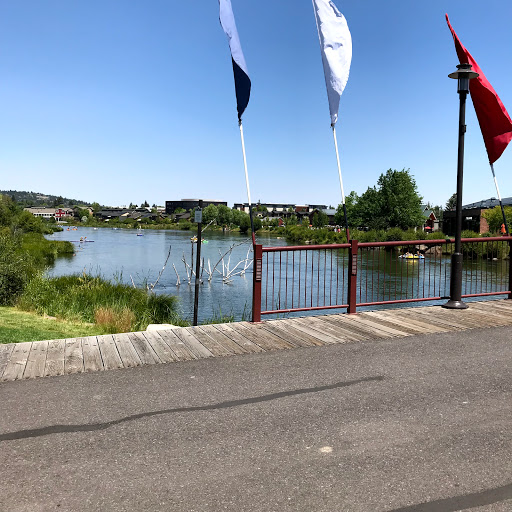 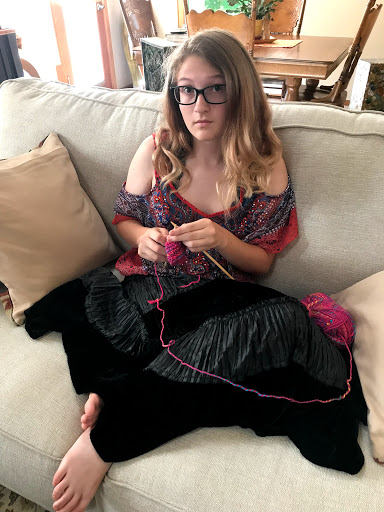 She asked me if I would mind giving her a knitting lesson again to see if maybe she could get it this time.  I started trying to teach her four or five years ago and still had her yarn and needles.  I think it’s all the hours of flute practice, but she got it.  Her first try had a number of mistakes so she asked me to show her how to cast off and then we started again.  She has about 8” knitting since yesterday and last night when Ian said goodnight, she told him that she was going to bed to but first she needed to finish her row.  Spoken like a true knitter!! 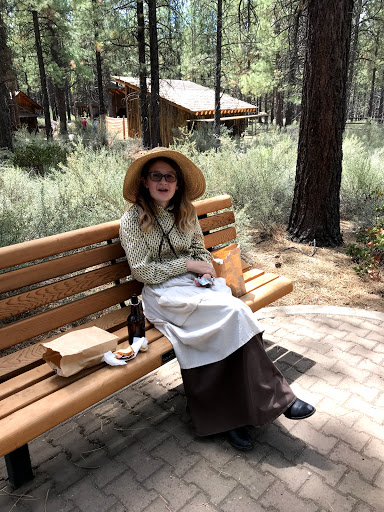 Yesterday was my volunteer day at the High Desert Museum and she’s so skinny that the costume she wore last year still fit her.  We were on a lunch break with with non-period appropriate brown bags - oops.  It was 97 degrees, the hottest day of the year so far, and we ended up leaving an hour early.  After all, we’re volunteers! 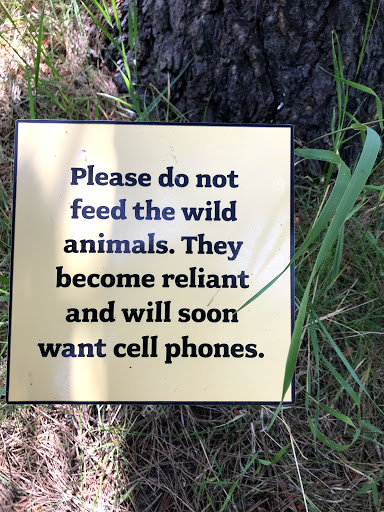 She pointed our this sign to me.  It’s new and tickled my funny bone. 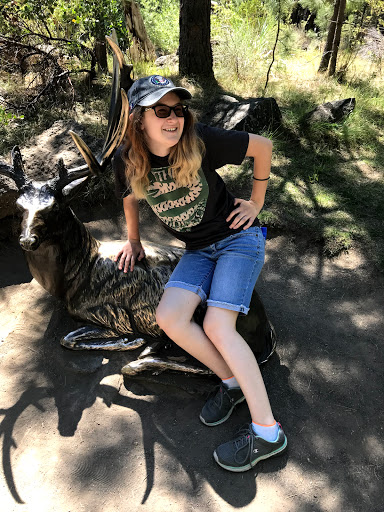 She asked if we could go back to the museum today since it’s been years since she’s gotten to see the exhibits.  Miss Emily was going to light the wood stove at the Miller Ranch House and bake cookies today which Lexi was anxious to see.  Emily is getting better with her wood stove cooking, and in spite of them being rich and very buttery, Lexi ate four of her them.  We both love that museum but after being on our feet for almost four hours, we decided to skip Summerfest, a craft festival in downtown Bend.  We had planned on that this morning but when she pulled the plug on that plan, I wasn’t sorry in the least.  It’s 93 degrees. My dogs are barking again!
She and I worked in the community garden of our church this morning and she wants to go to church with me tomorrow morning.  We’re going to Redmond after lunch so she can see Uncle Matt and Aunt Julia’s new house and pack our bags sometime in between since we need to leave Monday morning at 7:00 for Tacoma.  We didn’t get a housesitter until Tuesday so that’s a relief.  It’s been a busy week.
Posted by Sharon at 4:14 PM

How did your grandson do in his competition in Portland?
Great knitting Alexia!

If one can go by most photogenic pose, then she is MEANT to be a knitter! (Gorgeous shot of her, that.) Sounds like you guys are making great memories; it makes me smile. And I know having her go to church with you this morning made YOU smile!