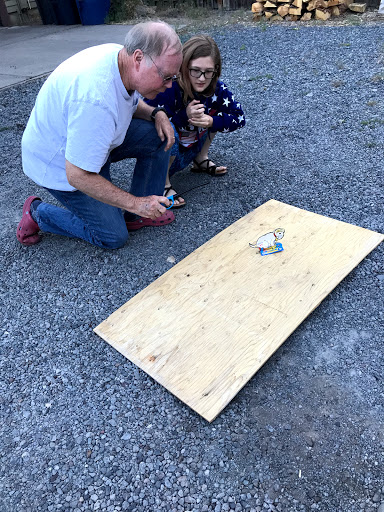 We picked up our 13-year-old granddaughter at the California/Oregon state line, halfway between Reno where she lives and Bend where we live, and she’ll be with us for the entire month.  It was July 4th and we quickly realized that few restaurants were opened.  We ended up eating lunch at the Indian casino on the Chiloquin reservation, a surprisingly good lunch.  Ian bought a pack of fireworks at Costco and we started setting them up after dinner.  This is called Poopy Puppy because when lit it produces, well, use your imagination. 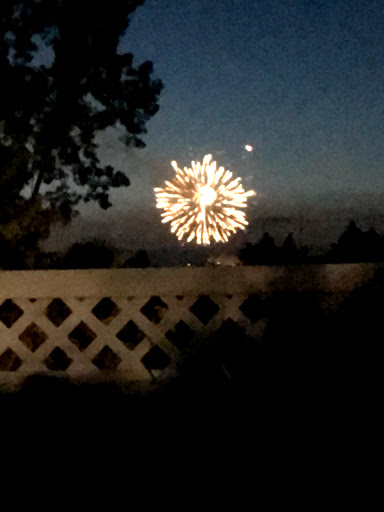 Alexia and I walked down to the end of our driveway with camp chairs to watch the city’s firework show launched from Pilot Butte.  A couple of neighbors joined us and Ian stayed in the house with Sammie who was beyond frantic.  There were plenty of illegal fireworks set off in the neighborhood which made for a very entertaining evening but rough on pets. 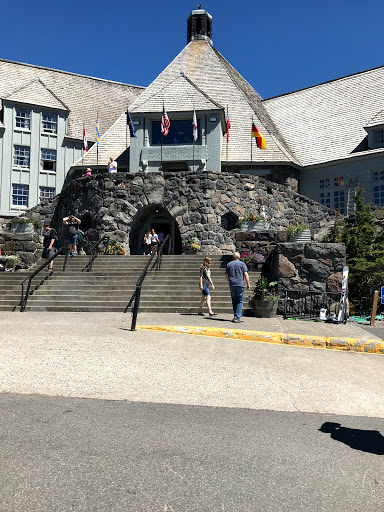 Thursday morning we were on the road by 9:00 with plans to stop at Timberline Lodge for lunch.  This is the hotel used in The Shining and friends jokingly warned to watch out for the twins! 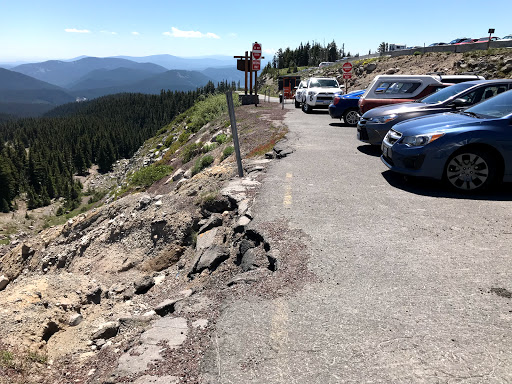 It is truly on top of the world.  Ian pulled into this space and I made him move the car to an interior space.  The drop-off here is at least a hundred feet with no guardrail.  This is the timberline, no trees grow above it, and many skiers were still enjoying the snow. 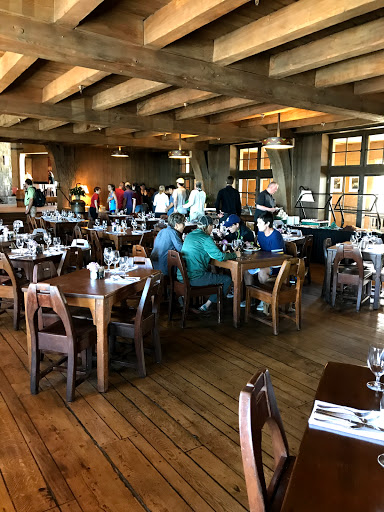 Timberline is a WPA lodge finished in 1937 after the six-mile road from the highway was completed.  It was built during the Depression by local craftsmen, many of them over 50.  The furnishings were created by local woodworkers, weavers and blacksmiths.  Many of the original work has worn out and the replacements are still made by local craftsmen.  The Portland Handweavers Guild continues to provide yardage for the curtains and bedspreads. 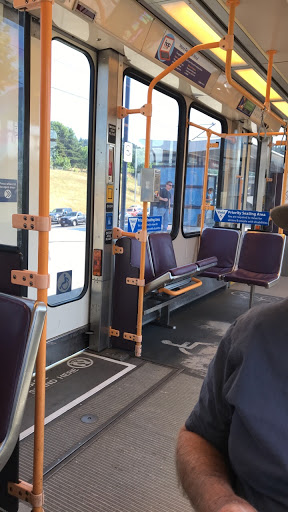 We got to our hotel by early afternoon and Ian wanted to chill in our room and take it easy.  The reason for the trip was grandson Logan’s DCI (Drum Corps International) performance the next evening.  And that’s when I realized I had forgotten my book, Kindle and iPad.  This was our first trip to Portland and the place I wanted to go was Powell’s book store.  Ian surprised me when he decided that we should go there right then, so we drove two miles down to the shopping center by the airport and IKEA where we parked for free and caught the Max, the light rail commuter train.  Looking at the freeway traffic from the window, I was so glad we didn’t drive in! 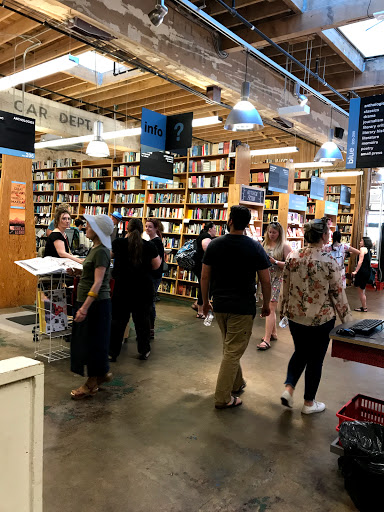 Powell’s City of Books is absolutely a destination.  Ian didn’t find any of the books he wanted, but Alexia found two and I found a used copy All Over but the Shoutin’ by Rick Bragg which I’ve been wanting to read for a very long time.  The previous owner left a note in the front that I have left there:  “I thoroughly enjoyed Rick Bragg’s descriptive writing and his honesty in storytelling.  Hope you enjoy it too.” 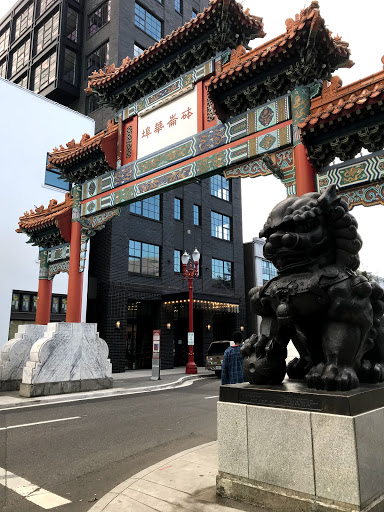 Ian’s place to visit was Chinatown for some authentic Chinese food.  For the past 15 years he has talked longingly about a place we ate at in New York, where the meats hung in the window and were sliced fresh for meals.  I didn’t like it then and I didn’t like it this time, but I couldn’t complain since I just left Powell’s. 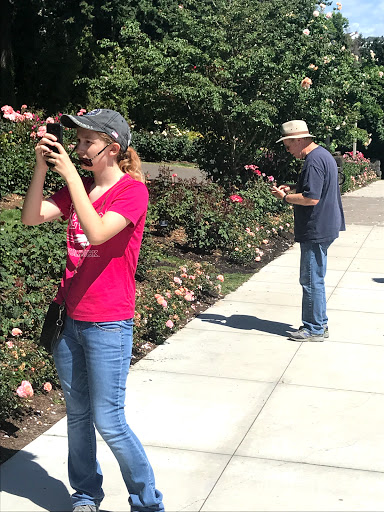 The next morning we ate breakfast at the hotel and caught the Max for a quick trip back to Portland.  Alexia’s choice of a Portland destination was the Japanese Tea Gardens so Ian asked if we thought we were up for a 1.3 mile walk from the rail to it.  She was in track and field this spring and thought it would be a breeze.  We didn’t know it up straight uphill!  And it was a warm humid day, holy cow!  We did it but boy were we dehydrated by the time we got to the top.  First we had to walk through the Rose Test Gardens which are flat, thank goodness. 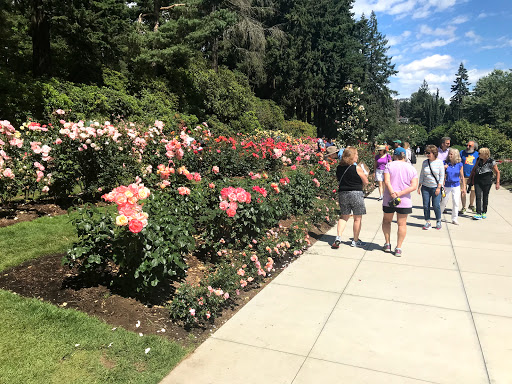 Fortunately is was still morning so wasn’t too crowded yet.  What a magnificent display! 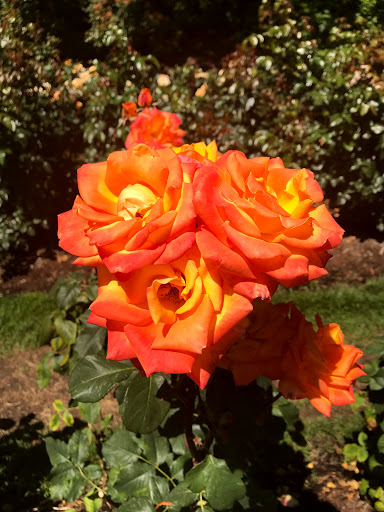 This was one of Alexia’s favorites.  She quipped that it was a whole sunset in a single flower! 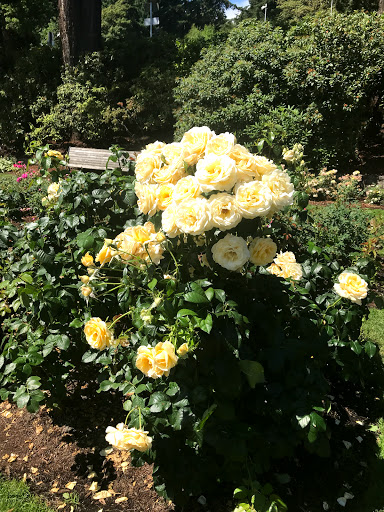 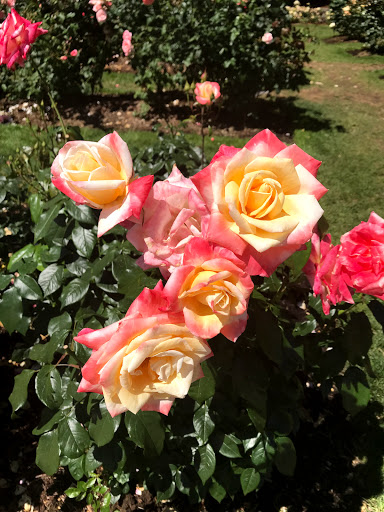 What a great trip...and how special to share it with your granddaughter!

I love living here!!! Thanks for so many reminders WHY. ;-)

It absolutely was a trip of a lifetime considering we managed to squeeze it all in in such a little amount of time. I’m so happy that Alexia’s parents share her with us for a whole month. I know it’s not easy for them.