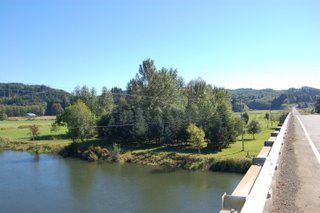 This is where my brother lives. He and my sister-in-law Georg live on the , a tidal river on the north side of the . Their dream for a bed and breakfast was sidetracked by a flood that required that they raise their house and the “bunkhouse” an additional sixteen inches. In addition to the B&B, they have a gift shop in the farm’s original barn. This is truly a farm - the sheep/goat barn is on the right side of the bridge, out of the picture, and on higher ground than the house. The Pacific Northwest B&B publications give them high marks, but the recent storms gave them high water marks. 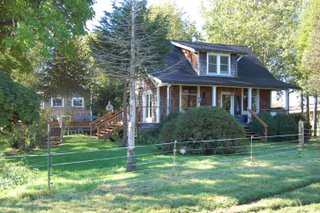 This is the house as it faces the river, with the original bunkhouse, now guest rooms behind it. Georg tells me that the storm they just experienced is being called a 500-year storm. They normally receive 100 inches of rain in a year. I live in the rainshadow, and it’s hard to image the water that must have fallen from the sky. Bob is a Cal Poly Ag Man and has filled with grounds with mini-gardens and habitats, which are now under water. We were just there a couple of months ago and I’m very sad for the loss. 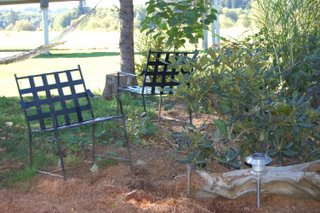 There are so many small gardens, hammocks, lawn chairs, and bird feeders that are underwater. This is the gift barn - the original dairy barn, now gift shop. Georg had two inchs of water in the shop.

Last year Bob was written up in the local newspaper, wearing fishing waders, moving through thigh-deep water to check on the lifestock. This year they had guests when the storm hit and hit and hit. Bob had already moved their cars across the road and parked them by the livestock barn. The access to their cars was underwater so Bob borrowed a row boat and ferried the guests to their cars. But not until the water had subsided enough for them to leave. Because the road on the north side of the bridge was under water. 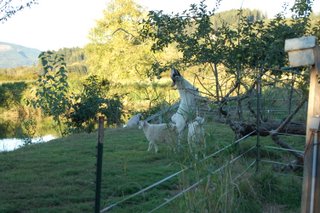 Bob has segregated the livestock from house and grounds with movable electric fences. He has a number of very old apple trees that are on the "other" side of the fence but his boer goat buck has managed to eat the apples anyway. It's a little uncanny. I know that this isn't the first or last flood. "Life goes on" seems like a trivial sentiment, but I guess it does. This isn't the first flood for those trees. 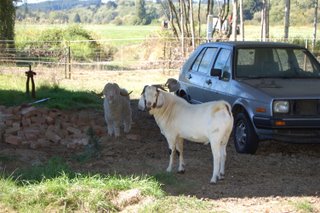 This car belongs to Jered, their grandson who lives west of them in Long Beach. That road is still under water, as is Jered's car. Bob and Georg have a long love of , and even though they no longer have a house in San Miguel de Allende, they still have friends there. My nieces gave them a trip to and the arrangements are for them to fly out of on November 15th, which is tomorrow. When I talked them this weekend, that is I talked to Georg, and she held the phone up to the window so I could talk to Bob who was in his muddy waders outside the window, they couldn’t wait to leave. Here’s the irony – our four-day trip to in a couple of weeks will cost as much as their four week trip to
Posted by Sharon at 9:48 PM

Darn - what a big drag for them... the clean-up must be exhausting. Downieville was hit pretty hard again last winter, and some of my friends are still dealing with construction repairs... hope they recover ok. When do you go to Disneyland?