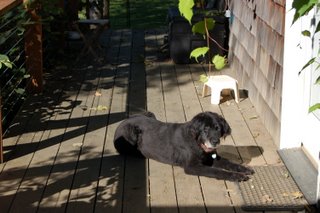 This is PR (Pack Rat). He is a labrador/Black Newfoundland mix, big and hairy but shaved in this picture. My brother Bob his wife Georg asked us if we would watch him when they went down to San Miguel de Allende to get their house ready for sale. PR was about fourteen years old at the time and they were worried that the trip to from their American home on the Columbia River Gorge would be too hard on him. He came to us in September and did well until the colder months, when it was clear his joints were stiff. Ian put him on glucosamine/chondroitin to see if he could ease a little of PR’s discomfot. It was gradual, but over months, it was clearly a success. When Bob collected PR in the spring, he was amazed at the change. We’re not sure how old he is now, but he’s old, that’s for sure. Maybe eighteen? 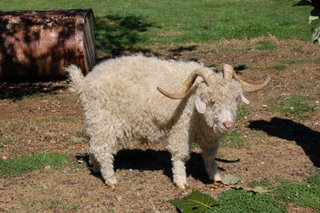 This is Nahlo. Bob was so impressed with the change in PR, that he started taking the dog’s pills himself. And over time, he broadened the regime to other animals on his farm and to Nahlo, his angora buck, who was clearly having a hard time with the gorge dampness. Bob is an Aggie from Cal Poly, . I think it says something that he would decide to feed an herbal remedy to his goat. And not only that he would think that Nahlo should take the pills, but that Nahlo would come to want them. 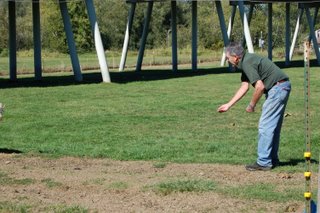 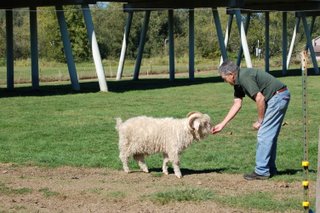 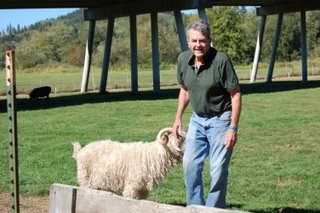 Well Sharon - What a wonderful story. So wonderful that I also put Ruby, my Border Collie on Glucosamine after visiting Dad and PR earlier this year. Ruby, at 8 years old, began showing signs of aches and pains. So much so, she could no longer jump in the back of the truck without assistance or could no longer get up from her nap without limping. Even though she's bread to run and herd and to constantly be on the go, she has definately overindulged on all of those activities. It broke my heart to think her life expectancy might diminish because of her active youth.

After hearing of PR's success I started Ruby on Glucosamine the beginning of April 2006. What a difference. Yes, it was gradual, but she is completely back to her old self. She is quickly approaching 9 years old and I'm looking forward to another 9. She is my cherrished companion.

Thanks from your niece,
Nancy