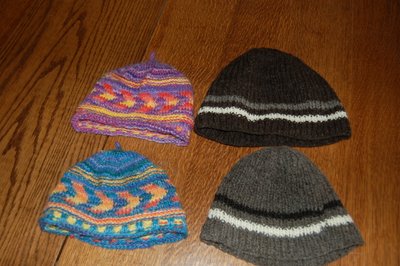 My friend Wayne emailed me a couple of months ago, asking if I would make hats for his nieces and nephews for tmas. After a couple of email exchanges, I began forming plans and dying wool. The girls are two and three, the boys five and fourteen. I used Charlene Schurch’s sizing in Hats, Hats Hats as a guide and fretted a lot. But once I got to work, the hats just fell onto my needles and I couldn’t be more pleased with the outcome. said the two year-old is a tomboy, so I chose blues and greens, and the three-year-old is a girlie girl and for her I chose purples and pinks. I love the boys’ hats though. The yarn is spun from wool of ’s own sheep!

Great, I love them all!

Wow, those are just great! I like how easy hat-making is, once I get over the angst about the size.