The May Guilding Meeting

I picked up my computer Friday morning along with my many errands, but I wasn't able to do anything until after I picked up the kids to babysit. The last thing I did in the evening was check my email and found one from Mim saying, "I'll pick you up in the mornin." I had forgotten about the guild meeting! Even the plastic bag in the fridge of mordanted wool didn't remind me. I'm glad I didn't miss it because it was a great event, well covered by Amy's blog. 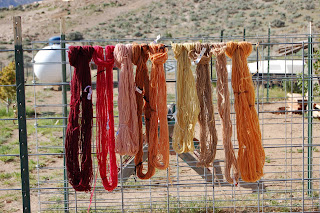 I was really happy with the results. The two skeins on the left are cochineal, the darker one being gray overdyed. There are a couple of madder, walnuts, onion skins, one from a bath called "mostly tulips" and one I marked BW with alcohol. I can't remember what BW was however. 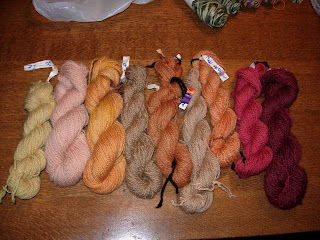 These are so pretty I just had to take another picture. I have some indigo crystals from Judith MacKenzie upstairs. For some time I have wanted to make an indigo bath. A couple of these would definitely benefit from blue overdye. What stops me is that I don't have any idea how I can keep a bath at the recommended 110-120 degrees. A crockpot is too hot and a stock tank heater is too cold. I don't think the kitchen stove would work either. 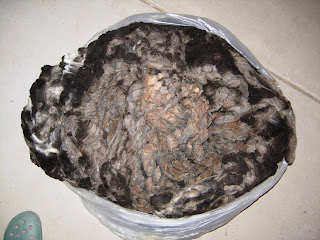 Saturday was Wayne's last guild meeting before moving to Oklahoma and he won't be back for the fair since he starts teaching the week after. In parting, he brought a stock trailer full of fleeces and rovings. Nancy Williamson and I both fell for this one and decided the only logical thing was to buy it and split it. It has a huge range of colors. I'm planning to wash the locks and flick them to keep as much of the color separation as I can. 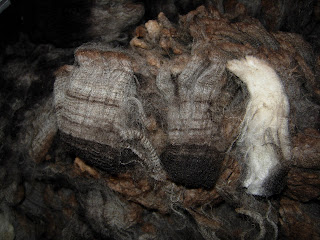 I'm sure you can see that it's Merino. It was a spotted animal anyway, and he said a copper deficiency produced the stripes. The locks are sound. break free, and have a lovely ping. It smells just as good as it looks - lucky me - lucky us.
Posted by Sharon at 8:24 PM

The merino striped fleece is a winner!! It's lovely!

Love the colors you dyed! The fleece looks unusual and beautiful to my eye!

The dyeing turned out so beautifully! I can't believe how much can be done with natural dyes. Good luck with the indigo bath. How about some sort of double boiler-esque set-up?

Get yourself an electric roaster for dyeing! It's wonderful when you need to hold a temperature over a period of time. You can get one for under $50!
Your skeins are great. Any ideas what you're going to knit or weave with them?
...and that fleece is spectacular.

wow-what yummy colors-what was your mordant-alum? the colors are so incredible are you really going to over dye them? i did indigo once with the guild-it was too technical for me-having to check the ph all the time-stressed me out!