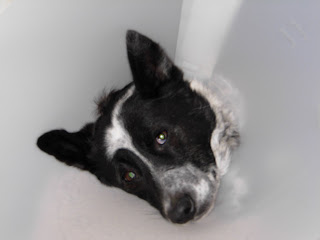 My poor, poor Eddie is trying to focus his drugged eyes on me. I just got home from work. He gave a heroic effort at an anemic tail wag too. We have had quite a day. It started just after I poured my second cup of coffee. I could see him at the back door, wanting in, but the moment he stepped into the house, I knew we were in crisis. Every step he took, he was squishing blood.

He has always been very stupid around cars, and long story short, he had been hit by our neighbor's car. Well, he wasn't actually hit - he ran into their car while romping with Buster - ran into their passenger door and then got caught by the rear tire. He loves our neighbor and will actually dig out to go visit their dog. But this morning, we had left the gate open so he didn't have to dig out. They drove down down to tell me what happened and to see what they could do. We were so lucky - it could have been so much worse, and I have expected it would be one day. Jen was driving and is devastated.

I applied compression until the bleeding slowed and called Ian who was en route to work. He drove back toward home and I drove toward town. Where we met is where I parked my car. I held Eddie, Ian drove and I called our vets as soon as I had a cell signal. I ended soaked with his blood - as were leaving our vets', the ladies in the waiting room asked - "You folks going to be all right? 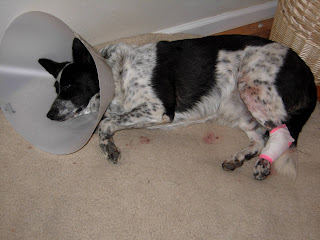 Nothing was broken though he had some pretty significant tears and a severed vein. He has two drains and a cone that he's too drugged to hold up. Years ago when Allison called and asked if we would consider adopting him, she said his name was Lucky and he was a great dog. He's still a great dog but we renamed him Eddie, for Edward Weston, the photographer of black and white. More than once, I think we shouldn't have changed his name, because more than once, he's been lucky. I think we've been lucky too.
Posted by Sharon at 8:05 PM

Poor, poor Eddy! He is indeed Lucky that it wasn't worse and that he had you there to rush him to the vet! I'll be thinking my healing-est thoughts his way.

He looks so forlorn in his cone.

Good thing you were there, and maybe now he'll be wary of cars?

Wow! How scary for everyone involved! I'm so glad he will be ok.

Oh Sharon, that sounds so scary and awful! Speedy recovery to Eddie, and kudos for you for keeping so cool and level-headed and getting him help. Pets mean an awful lot to us, and it's so hard to see one in pain.

We have lost two dogs on our road, they were both healers and thought that cars were for herding. And people go down our road very fast sometimes, not thinking about others. Glad Eddie is on the mend.

Poor boy! Hope that his healing is quick and complete!

What a frightening experience! Poor guy. It is so fortunate he didn't break anything. I hope his recovery is quick.

With the new puppy and two sets of company I haven't visited lately so I just now learned of Eddie's mishap. So glad he's doing better, and that nothing is broken!