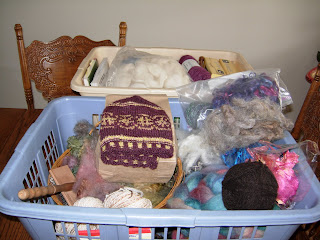 In a dis-
appointing turn of events, I awoke with no voice today. I didn't have one yesterday either, but I've been on amoxicillin for bronchitis since last Thursday and was sure that I'd be back in form today. We got another dumping of snow last night and I decided my goose would be cooked, if I slid off the road, the blowing snow covered my tracks and I couldn't call for help. One of our neighbors spent the night with two her friends in a Lexus last night when they slid off the road into a ditch. So I'm home. 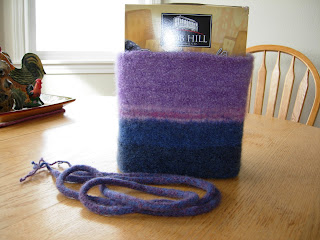 This is the bag that I had planned to assemble so they could see how simply one is made. You don't have to be a spinner to make a bag, but you do have to use wool. The bag I'm carrying at this time I knit with two colors of Lamb's Pride with a color bridge of rainbow dyed handspun. 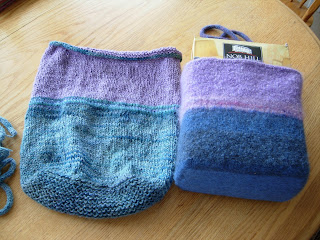 Before they're felted, the bags are downright homely. The left bag is all Coop-
worth, but the right one is overdyed gray Romney on the bottom and Coopworth/Salish on the top. I love its luster and how it appears to bubble. I mixed hybiscus and mulberry because hybiccus alone is too pink. Then when the yarn was cooking, I sprinkled just a little of the mulberry crystals over it - I hate to make a solid color yarn. 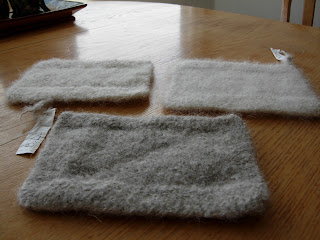 I was hoping this angle would show how different the results are. Top left is Border Leicester, right is Lincoln/BL X and bottom is Romney. The greatest shrinkage by far was the Icelandic which was completely done at two washings, when the rest weren't done until four. I cast on 30 stitches for all the swatches. The most dense was the Icelandic and the most stitch definition after felting was the Lincoln, but what halo it has! Maybe I'll just use a smaller needle. I won't be able to combine Icelandic with the other fleeces unless I want it to produce a draw-in. Who knows~

And in another turn of events, Linda called a little while ago to ask if I would be willing to do this presentation after the Guild meeting this Saturday as a substitute Learning Tree program. The scheduled program had a conflict and I'm delighted. I won't even have to unpack my baskets!
Posted by Sharon at 12:00 PM

Almost a bummer! You don't mention feeling actually ill, so I'm glad of that. I love your bags and absolutely agree about solid color yarn. (Which makes me wonder why I use it so much then.)

Wow, the flat bottom of the Romney/Salish/? felted bag is so nicely done. I had to cut and sew my most recent felted bag to create
a flat base. Good job, Sharon!
No voice to cheer on the Giants? I hope you recover quickly.

The bottom of the bag wasn't flat until and stretch it and forced the two cereal boxes to sit all the way down to the bottom. I've never opened the cereal - it's the boxes that I want~

These are so neat! I have never tried felting - well, purposely. heeheehee

I love the colors, too.

Sorry to hear you've not been feeling well. I think we all need a trip to visit my daughter...in New Zealand! It's summer there. Wouldn't it be nice with all the green pastures, azure water on sandy beaches? I'm ready! ;-)

Such a busy woman! i hope you are back in full voice for the Guild meeting!

Hope you are feeling better Sharon, I've still got the ickies in my chest, like I said, I think it is settled in for the winter lol

love love love the blue purple bag!!!!! what pattern do you use? anfd you can always post cute pictures of your grankids-she's a little sugar pumpkin!