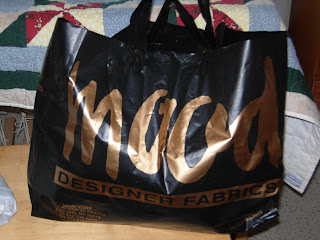 This is my bag from Mood. I hadn't even thought about going until we were in the Super Shuttle from the airport and everyone was talking about what they were going to do in New York. It suddenly occurred to me - I could go to Mood. Our shuttle mates were all Project Runway fans and so jealous. You are not! Shut up!! 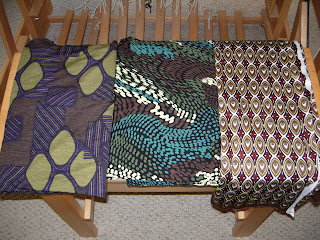 These are all about a yard and a half of 60" wide single knit cotton. I fell in love with the colors. I'm not cutting into them until I have a little sewing practice under my belt and a better understanding of what size pattern will accommodate my matronly body since if I were to buy the size recommended for my waist, I would be in a size 18. 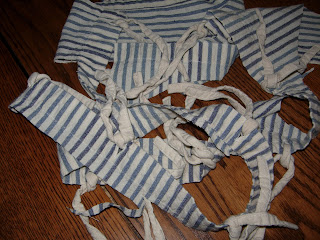 When we were in Washing-
ton in September my SIL asked me if could use a cotton shower curtain. I took it, thinking I'd use it as a shower curtain. Instead I cut it into pajamas and when I saw the tie-ons, decided to use them instead of buttons. 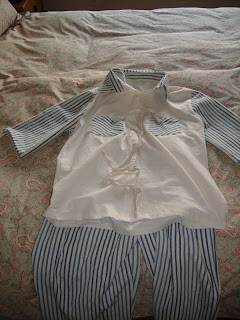 I used to love to sew but haven't made a garment in 20 years. I bought my sewing machine to make sofa cushion covers since our crazy dog Cody had chewed up the old ones. My old sewing machine had broken. I figured the price of a new machine was less than a new sofa. I haven't used it in the ten years since then. This is my first project and boy have I forgotten a lot. I made a lot of mistakes and that's the point - to learn on a shower curtain, not on the handwoven, which is my eventual goal. 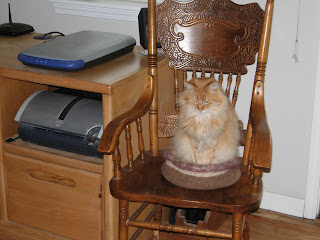 I drove into town yesterday for a spin-in at Heidi's. She knits felted beds for all her cats and was laughing at this one which she over felted and turned into a fruit bowl. I thought - hmm, Charlie is only 8 pounds - and the fruit bowl bed ended up coming home with me. 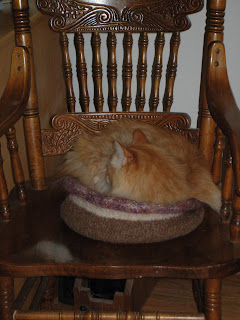 Charlie spent a half hour carefully and methodically sniffing the bed, another half hour just sitting in it, and then he finally curled up and went to sleep. I wonder if he'll ever sleep in it again. He's very fond of sneaking into the dogs beds and the fruit bowl won't generate any jealousy. 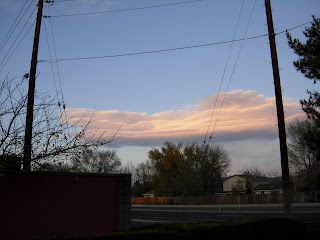 While in town, I caught this photo of stacked wind clouds, which usually are harbingers of a storm since they indicate the presence of high winds aloft. It's been so long since we've had a storm, that I just thought they were pretty. 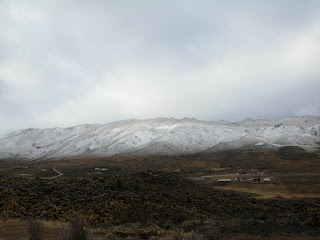 The clouds were telling the truth - a storm was coming and I woke up to this this morning. It's my first post-
retirement snow and significant because - I didn't have to drive to work in it!!!!!
Posted by Sharon at 3:39 PM

What an epiphany! Can't say much about the sewing, needles dont fit in my hand, and sewing machines are beyond me, the jammies look great!

Jammies look great! You'll get the hang of sewing all over again. I've seen those clouds, maybe they're from OR along with that snow! ;-) We're going to keep it coming for few days!

Love the jammies...with all your time to lounge in retirement (not!)

Yep, you kind of have to close your eyes to size when buying those commercial patterns. They no longer relate to the sizes we buy off the rack.

Are you familiar with Daryl Lancaster's blog and website? I took the sewing class from her at Mich. Weavers in August. Her blog is at here
Her website is here
She's also teaching at Campbell Folk School in January here (in case you have some more retirement travel time coming up!)

When I got back into sewing about 5 years ago, our library had all of Sandra Betzina's books ( here) and I found them to be really helpful. Ended up purchasing a couple of them. Good luck on your adventure

Love the Cat Bowl! He barely fits, it looks like he's trying to fit into a hat. I had a good laugh!

Whoohoo! Snow! I'm driving down for Thanksgiving, and figure I'll be driving in it, darn it... I've gotten complacent in Oregon! I may get flurries tonight, but they won't stick.

Congrats on the sewing! I have a sewing machine, and several projects lined up, but just can't get off my rusty dusty to do them. Hopefully I will soon - they include winter riding breeches and a wind-proof vest!

I might have to make Golgi a "bowl" - though currently he's curled up on the sheep pelt on the chair. I'd have to make a roaster, though - he weighs 16 lbs!!

Great fabric finds at Moods! Love the knits you picked out. Nice jammies! A great idea for a reuse.

And how pretty the snow looks on the hills.

Love the PJ's! They look comfy!

I don't even know what Mood is. But it must be a store if you come home with a bag filled with stuff.

Charlie's too funny. At least he consented to sit and curl up in it!

Those are some cool clouds!!

Snow is a lot more fun when you aren't forced to drive in it!! Plus it's good knitting weather! (Or sewing, or weaving!)

Congrats on the jammies! My favorite part of your post is the picture of Charlie just sitting in the bed, contemplating the experience. Very like Zach.

Yay! You didn't have to drive to work! Good luck with all your sewing practice; as I said, no love lost here on that art/craft/skill....