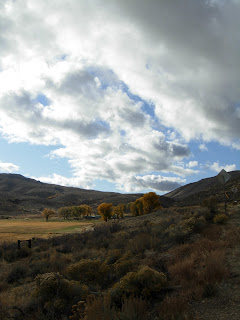 Finally. It has been an unseasonably warm October. We have only needed to set a couple of fires and the cottonwoods, which should be bare now, are finally turning gold. It's good to see storm clouds. Even in New York, the weather had been so warm that the trees in Central Park only started to turn the days before we left. Worrisome. 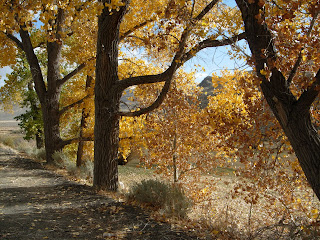 Tildenburg Clark named his classic book, City of Trembling Leaves, after these mammoth trees. They have a wonderful sound, a rustling, rather like running water in a creek bed. 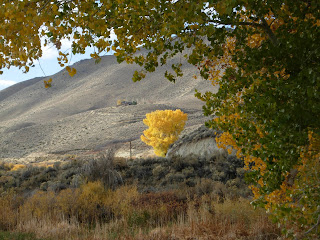 I parked and waited until the clouds parted to catch this photo. Their color is brilliant when the sun hits them. I was late for the meeting I was driving to because I just wanted to get one more picture, and one more, and... 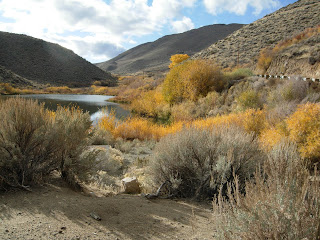 one more. Since I had parked the car, I just had to walk up and catch this picture of the dammed pond at Ross Creek. Nevada doesn't have many colors so that makes what we get all the more special. 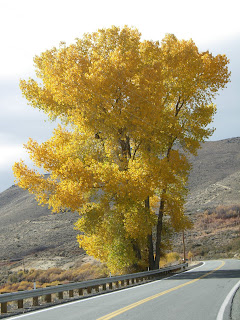 I love these trees. They speak to me of the ability to thrive against odds. When grandson Kiernan was little and we'd drive by, he anticipated seeing the "giant wobot twees." He saw them as awesome, and that was the best he could describe them. Not bad.

Those are great pix, and I always love to read your appreciation for your surroundings. You definitely bloom where you are planted!

i love cottonwoods as well! your pictures remind me of new mexico!

When we drove from Denver to Moab, we followed the path of the Colorado River for much of the way. I love seeing the cottonwoods following the river as well.

I love the colors in the shot of the pond. One of my friends is weaving with those colors right now.

These photos look like cover art for a Stegner book! Thanks for taking the time and effort to snap them and share.

Great pictures and it is amazing how the landscape shows off the colors it does have. How was the spin-in?

Oh I miss my cottonwoods! I moved to Nebraska from Carolina and thought I would never see enough trees, forests like in the southeast. Now I am back in the land of pines and oaks, and love it. But the cottonwoods had a charm, a value all the greater for being virtually the only trees native to the plains. I miss their golden hues and trembling leaves, and their silvergreen summer coats, and even the spare, lean look of the winter boughs. Thank you for the lovely photos, I drank them in!

Great pictures!!! I love cottonwood. We had a wonderful at in our front yard when I was a kid. Don't see to many in Pennsylvania.