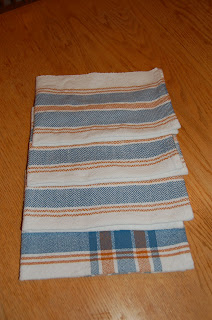 Margi's birthday is one week from today so I put the pedal to the metal, well sock to wood, and finished up the towels today so I can get them in the mail. Towels look absolutely terrible until they're finished. I was a wreck, waiting for them to come out of the dryer and show me that I hadn't spend hours making ugly. 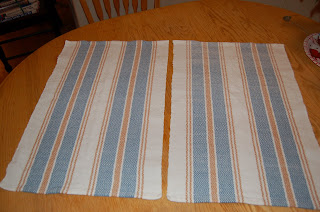 The first two towels are in the 2/2 twill that I as experi-
menting with. I thought they were really different while I was weaving, but from a distance, I can see that, not so much. 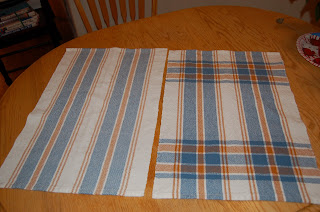 I really like the plaid on the third towel and took Valerie's suggestion for the fourth to make it straight twill. I hope the plaid doesn't break up the set idea too much. It's quite a departure from the other three. I'm always nervous when I give a gift of something I've made. 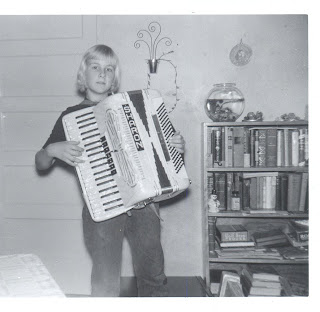 This week is Retro Photo Week on Facebook so I'll leave you with the blast-
from-the-
past photo that I scanned and posted today.
Posted by Sharon at 8:17 PM

Those towels are beautiful! What a wonderful gift -

Love the accordion - I played one when I was in 1st or 2nd grade - but not one that big! T.

Congrats on meeting a deadline - something I'm notoriously bad about!!

Sharon they're wonderful! She will be delighted with them, who wouldn't be!

Now, the burning question of the day is -- do you still play accordion????? (Inquiring minds want to know)

The towels are lovely! What a nice even plaid you made. She'll be thrilled with the gift.

An accordian, with your name on it even?

Another thing in common! Do you still have your accordian? I do!

My dad used to play the accordion. Many a morning we woke up to him play a good old poka. I think he was a want a be Lawrence Welk. I love that you'r name is on yours.

Good Lord! That thing is as big as you were!!

I think the third towel being different actually adds to the set. And I love the plaid one - it's so pretty!

Love the plaid -- what a treat! Accordion?! Wow. A woman of many, many talents.

Beautiful, beautiful! You are certainly a craftsman, Sharon.

Sorry for being a bit cheeky...
Do you still play the accordion once and a while?