It was an Expensive Day 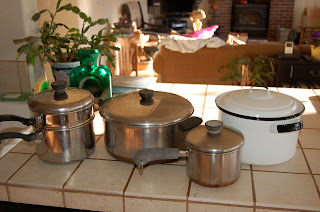 Out with the old. I have never owned a set of pots and pan and certainly hadn't thought I ever would. Earlier this month I read Kitchen Confidential by Anthony Bourdain - recommended reading! He said that a sauce pan needs to be heavy enough so that if you hit someone over the head, it will knock them out, and if your's doesn't - throw it away and buy one that does. Just days after reading that, I decided to cook some rice and finish off the Hawaiian meatballs that someone brought Christmas Eve. I used the little Revereware pan in the front and completely burned the rice and the pan. I had an ah ha moment and decided that after Christmas, I could probably pick up said pan on sale at Macy's. 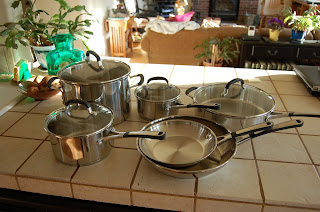 In with the new. I'm not sure what tipped the scales in my judgement since I haven't bought pans in all these years. The sale price was tempting of course, and I opted for plain stainless. I decided to go with what I know. Any one could be a weapon. DD Chris wants the old Dutch oven which was my mother's. 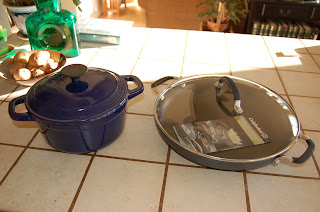 Also also wik (think Monty Python), once I lost control, I also bought the enamel-
clad cast iron pot. It replaces one that I got as a wedding gift back in the dark ages and that wore out years ago. It makes great rice. The pan on the right was a freebie - don't what its use is. 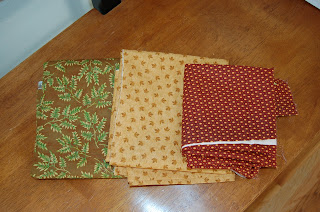 At Hancocks, I got the cutting mat, ruler and rotary cutters and also fabric to make DIL Missy's rag-rug placemats. She asked if I would make some to match the towels. I pulled some of the thrums off the loom this morning and these fabrics come pretty darn close. I'll preshrink them tomorrow when I do laundry. I also bought two cheap Venetian blinds at Home Depot, 23" and 36", to use as packing when I weave. You'd think I had a job the way I was spending today. 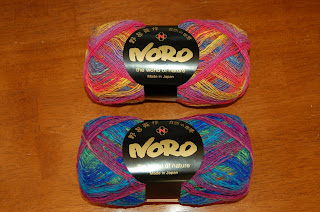 I ran into Jimmy Beans to drop off a Hand-
woven for Jeanie. She was on the phone and held up a finger - wait a minute. We've become a mini-study group of two, both learning. It's neat to inch forward together. I should have tossed the magazine to her and run.
Posted by Sharon at 4:50 PM

I still have the Revereware pans I had 30 years ago....they are still going strong, although just tonight I was looking at POTS and PANS in the mall.
Go figure.

You can't beat a rice cooker for making the best rice in the world - I wouldn't be without mine!

I got a few new skillets and one new pan when I was selling Pampered Chef years ago - they are mostly still going strong - and the Revere ware pans that I bought for myself when I started out my household as a single girl :-) Have fun with your new pans - we'll all be over for soup! T.

My most frequently used 'pan' is a cast iron dutch oven that came down through my Mom from her Uncle Chuck. I do have nice pans...but that dutch oven is the work horse around here.

So...how are you for good knives? That's another expensive venture.

I want a set of pots and pans, too. My chef son says that he and his brother may go in on a set for me for next Christmas. That would be nice. I have my Revere Ware set from the late 1970's, too, and I'm ready for a new shiny set! Looks like you got lots of useful items!

Unfortunately not all Revere Ware was made equally. To save money, the company started using less copper in the bottoms after 1968. The copper was the innovation that helped spread the heat more evenly and make burning less likely. You can identify the "good stuff" but the stamp on the bottom that includes the words process patent.

I had my grandmother's Revereware until pretty recently (she was a terrible cook). Otherwise Len and I are both pretty dedicated cast iron skillet users. Enameled cast iron is on our wish list, though!

Wasn't Bourdain's book fun? It did not make me afraid of restaurants (though maybe a bit leery of fish on Mondays). Do you watch his Travel Channel show? It's excellent.

We bought a new set of cookware when we built this house and got a smooth-top range. My old Revereware set went to the camper; the bottoms were not flat enough for the new range. My new set IS heavier; I think I could knock someone out with it so I must have chosen well. I really like the see-through lids, too. I had a rice cooker, but like using a saucepan better. Water, rice, saucepan with lid and 30 minutes; what's hard about that? Besides, the saucepan can go in the dishwasher....

You know I tell my husband every year to buy me frying pans, he never has. I finally bought some through Pampered Chef and I love them! I've always used T-Fal, NO MORE! lol I love these pans and will continue to buy them until I have the entire set and there is no T-Fal in my cabinet!
Beautiful set Sharon, enjoy :)

New pots and pans are totally blog worthy! I still have some Revereware sauce pans and I dearly love them. For my business I use Cuisinart and at home it's All-Clad and Revereware. I have a rice cooker because it frees up a burner when I have all four of the burners churning and burning at once. The Cuisinart set has taken a beating in the last four or five years I have been dragging them around for the business and they still look pretty good!

I'd say you had a busy day.
I can't agree more with Anthony Bourdain (I sure do like him). I've been replacing all my cookware with Calphalon and could not be happier with it!!! I also think you should have the very best knives you can afford. Buy them once and they will last you forever. I have Chicago Cutlery and love them.

Have fun with all your new purchases.

I want you to do a review of the pans in a month or so when you've used them a lot. I still mostly have pans that my mom gave me when I set up my own apartment...so they're her castoffs....lots of old Revereware. I'm curious about whether new pans make a big difference.

Love your new yarn and fabric purchases!!! So much yarn, so little time!! (How did we ever have time to work?)