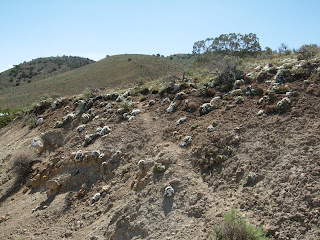 Ian and I were surprised by this new wildflower as we drove home after our trip. I took my camera when walking the dogs yesterday to get pictures. It's looks like icing on rocks. 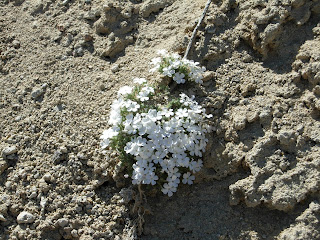 Instead, look at these sweet blossoms, growing in impossibly hostile conditions. It's why desert flowers are so wonderful. They bloom where it doesn't seem possible. Life lesson?? 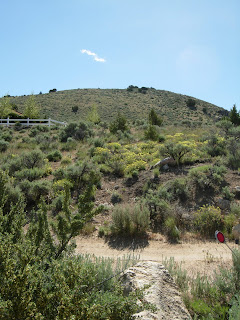 And then there's this bank of flowers. Their presence is so subtle. 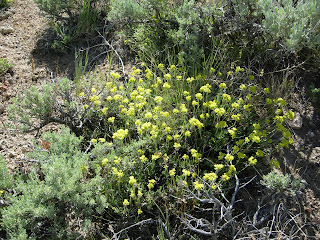 It takes so many plants to make a field of color. This is just one plant. 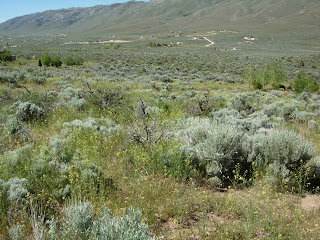 The unusual spring rains have blanketed us with three unwelcome weeds, one of which you can see here - wild mustard. It's the yellow in the picture and a big fire hazard. The other two are cheat grass and crane's bill, which are there but you can't see. Our animals won't eat any of it. Hmm, I wonder if goats would like these weeds, I mean wildflowers. 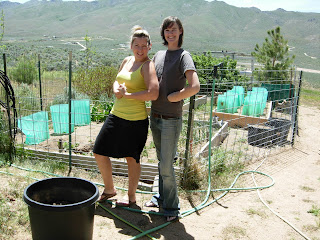 These are our two wonderful house sitters - I love them soooo much. Emily on the right takes the first four days after which she is headed to art school in downtown San Francisco. Dana is headed to graduate school at a latter date, and without them, there would be no Black Sheep Gathering for us this year. 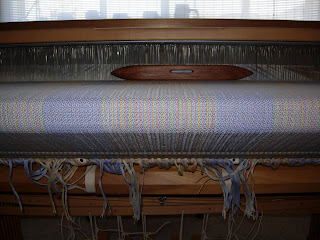 I did get the baby blanket warp on before we left for Redding and was able to get at least a start on it yesterday before we leave for Oregon. I ran out of the variegated cotton but I'm confident that it's going to be a nice gift in the end. I love my new Jenkins shuttle, heavy and perfect to toss at this width. If I were on a desert island and could only have one one shuttle, this would be it.

I'm sure you have all seen national coverage of the Nevada primary races today. It appears it's not legal to stand outside a prescient in a chicken costume to express your distaste for Sue Lowden, but you can vote wearing one. The thing that frosts my hide is that many years ago, I lived in central Nevada and attended the same church as Sharron Angle, now running for Senate in the primary against Harry Reid. In fact, we were part of the trio we called the Sharon Sandwich, along with our pastor's wife, and sang at a wedding at a Baptist church in Elko, Nevada. She played 12 string and I a mere 6 string. I am not fond of that memory, but it did get me a job at the University when it turns out the woman interviewing me was the pastor's wife of that very church in Elko where we sang.

And from my job, many years later, my daughter was hired by a woman I had hired. Funnier things have happened. And because my daughter was hired, both of her children were able to attend the University preschool education program. So while I want to hate Sharron, I have to go on the hate-light program. But I will say, that the nose I sang with and the nose you see on TV and not the same. Just sayin'.
Posted by Sharon at 9:59 PM

You hate her because she played 12 strings and you didn't?

Watching the morning news coverage of all the political races, including your Nevada race, was more interesting with your inside take on a candidate. The desert wildflowers are truly beautiful, by the way!

ocwLOL, well all politics is local. Watching NV closely too.
The blanket looks great. Wonderful start. Glad you like the Jenkins shuttle. It's my favorite too. Have fun at BSG!

The wildflowers in your area are beautiful and so special that they do actually live in such harsh conditions. Interesting that cranesbill is a weed there! Here is is planted into backyard gardens. Beautiful blanket too! Looking forward to hearing about the BSG

Did you know you can dye with the flowers of wild mustard? There might be a use for them afterall, and with no flowers on the plants, there will be no seeds to spread them.

So, are you going to tell us about Black Sheep Gathering? I'm so jealous I can't go that I am anxiously waiting to hear about your experience.

YAY for farm/housesitters! YAY for getting to see you again at Black Sheep!