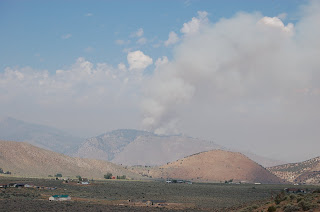 The winds from the thunder-
storm and electrical activity at the airport prevented the firefighters from attacking this fire from the air until mid-morning today. It got a pretty hefty head start by the time the Type II Incident Command Team was called in. The highway was closed about 2:00 and remained closed at 8:00 at last report. 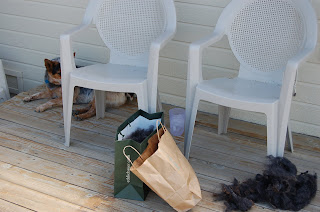 There was absolutely no wind this morning so I used the time to sit on the deck and pick through the last of this dirty fleece. I hope the fleece that's soaking now isn't as dirty as this one. 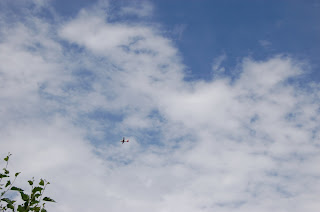 Throughout the afternoon we heard the drone of fire planes and choppers. It's ominous and comforting at the same time. I grew up in the arid West and am conditioned to get agitated and uneasy during a fire. 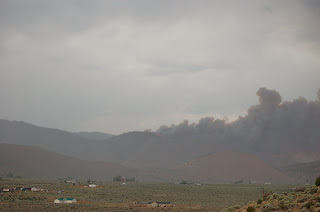 By mid afternoon, the fire had crested and was coming down the Eastern slope (click for big). This is out of the reach of anything but the air crews. All we know at this point is that one residence and two outbuildings were lost, one firefighter was injured and evacuations are in place. We are safe and also sad. 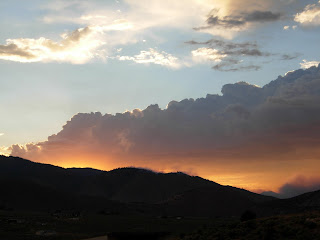 This is how it looked at sundown tonight. The air crews can't fly at night so we just hope the wind will die down overnight and give the crews a break. Our valley VFD are part of the crew. 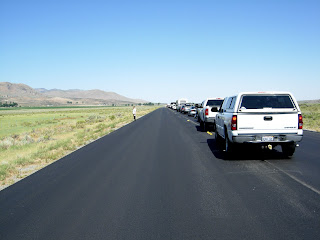 This is the photo I showed you on Thursday from my ill-timed run to gas up Ian's truck. This is the valley that is burning. This is the highway that is closed.
Posted by Sharon at 8:41 PM

Hope they get it under control soon! We had some boomers last night and are promised another light show tonight. I grew up in New England and other than house fires it was never a concern. Right about now I'll take that high humidity. The west gives meaning and weight to the phrase "tinder dry".

Oh so sad and scary. Hope things calm down soon.

Oh my!!! I am hoping and praying that they get the fire out before anything else is lost and that no more people get hurt.

Maybe you'll get a good, solid downpour that will put it out.

I'm gathering that this is an annual problem for you all. This one obviously took too great a toll. Very worrisome.