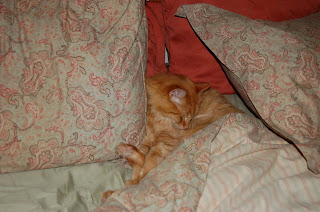 Charlie loves the kennel where we keep him. James bought a new kitty tree for the feline area that Charlie adores so much that I've been looking for one online. But more than anything, Charlie loves his own home. I didn't pick him up until Tuesday, and he dissolved into the covers of our bed, which he normally thumbs his paw at. 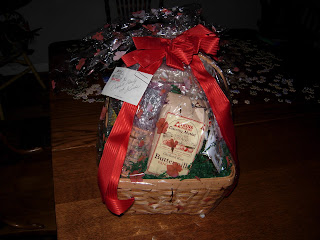 We got a phone call late Wednes-
day from Carol, neighbor on the hill above us. They'd just gotten home from town and noticed a box at our gate. It was this gorgeous basket from grandson John's parents in Massachusetts, plum full of crazy good things. We have already brewed and consumed the coffee and trying to figure out how to get more. 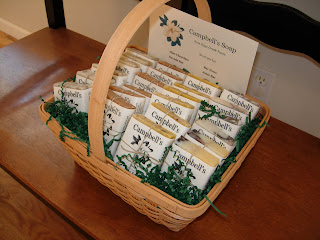 The actual basket is a real-deal. There's not a staple in the construc-
tion. I'm going to do a craft fair in November, so conscripted it for that weekend. Chrissie can have have the rest of the foodies - oops. I think we may have reduced her selection. 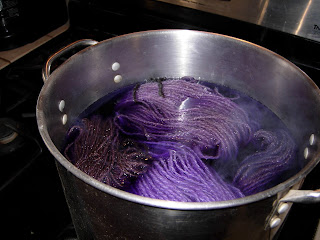 I said I was done knitting felted bags, but with an eye to this craft fair, I decided to dye up some yarn yesterday in shades of purple. I love the idea that you can put four skeins from different sheep in one pot and get four colors. 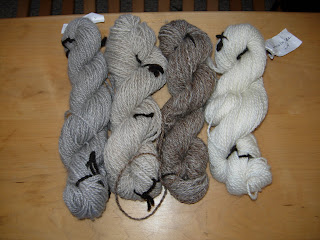 These are the four skeins that I put into the pot. From left to right: gray Lincoln, Border Leicester blend (ewe named Blondie), Brown lusterlong wool cross and Lincoln/Border Leicester cross - that last was an award winning 12 pound! fleece at Black Sheep Gathering that I split with a friend. 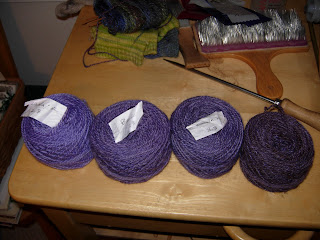 These are the purples that I got and now I've decided to do the same with maybe olive or golds. It's all speculation - craft fair projects, well yeah, as is random dying.

Meanwhile, Ian and I both spent the day in town. I had my library book club just after lunch. Afterward, I bit the bullet and spent two hours bra shopping - tedious and excruciating. It was 5:00 and I hadn't eaten since breakfast. While gassing up at Costco, my dear friend Michelle cruised into the next bay. She was on her way to a guitar lesson and had just gotten a text message from her teacher that he was running behind. We ended up having an evening meal at Qdobas and spent an hour on catch up. I cannot tell you how sweet that hour was.

Meanwhile, I got home at 7:00 to starving dogs and no Ian. His day was crazy full, including a lunch with a wonderful mutual friend of ours and Michelle's, and he ended up in a meeting with our union. He's been hired for the legislative session and the unexpected income is paying for us to visit New York. It was pretty out of the blue, but on faith, Ian booked a flight a couple of days ago.

I told my book club I wouldn't be there next month and why, so the next order of business was what plays we should see. I think we're leaning toward the South Pacific reprise. But hey, we just booked our flight day before yesterday. Ian was trying to get reservations this evening at Jonathon Waxman's restaurant for my birthday, but they're booked into November! I have one meal in my must category and that's Yonah Shimmel's. It's on East Houston Street and totally out of the way - whatever.
Posted by Sharon at 9:52 PM

What a sweet photo of Charlie - in a luscious color palette! I think you should duplicate THAT in a project. :-)

Oh what lovely purples and that gift basket such a nice unexpected treat! How exciting about going to NYC and I'm not at all surprised J. Waxman's place is booked out to November.
Charlie looks positively king like and happy to be home.

Such beautiful and consistent handspun. I just bought a Natural Dye kit with an herbal mordant at the Knitters Fair last weekend and hope to have some good luck with that.

That basket is a really good way to display your soap. Maybe Charlie is like some of us, likes to get away for a little holiday but always loves to come home again :)
I luv, luv, luv the purples you got..such fun colours.

I adore those purples you got. They are different enough to be interesting, but they go together so well.

So, what is in store for them.

It sounds like Ian is feeling better. I am so glad. The cooler weather here has been a godsend for Scott as well.

I love the different purples! What a great idea to dye different breeds together in the same dyepot.

I bet Charlie is so glad to be home.