Retirement, i.e., I Don't Have Time to Work 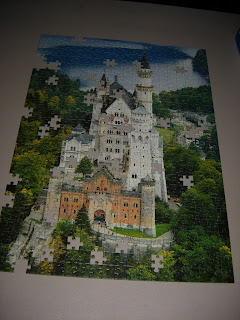 My DIL Missy, DD Chris and I visited Goodwill with the four grandkids during our visit to Bend in June. We came back to the house with this puzzle which was an absolute bear to work. DS Matty and his girlfriend Julia got sucked into the madness. In the end there were 35 pieces missing! We congratulated ourselves that we finished it at all. DS Josh thought we were all bonkers and refused to get caught up. 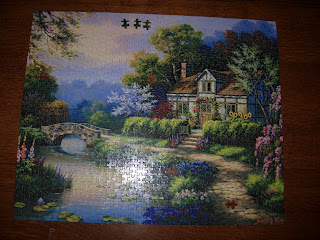 A couple weeks before the gathering Matty texted me that he and Julia were at Barnes and Nobles and had purchased a 1,000 piece wooden puzzle. He said he couldn't help himself. I quipped - are you sure all the pieces are there? Given the Bend puzzle, we both thought that was funny. This new puzzle was nearly impossible and even though nearly everyone worked on it over the weekend, it was slightly over half finished when everyone left. Amy sat down and corrected several sections before pulling out with her trailer. She said it was all she could do or she would never leave. I can't rebox an unfinished puzzle! No one in my family would understand and, that aside, I'm not sure I could do it anyway. I pressed on until yesterday when I attacked the final 40 or so pieces. I ended up with four holes and three extra pieces that will not fit the holes. The picture looks right, however Charlie has been batting pieces around the dining room. So anti-climatic. 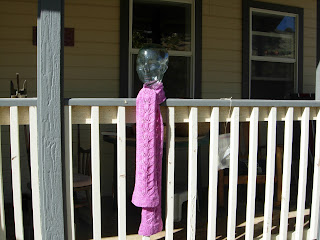 On the other hand, I finished my "Walk for the Cure" scarf and got it in the mail. Of the three that I did, this one is my favorite. The phone rang this evening, which is unusual. Our phone is long distance from Reno so we almost always conclude that if the phone is ringing, it's a solicitor. It was Judi! She had received the scarf and absolutely loved it. I knew she's not a pink person so tried to amp up the pink while keeping true to the meaning. 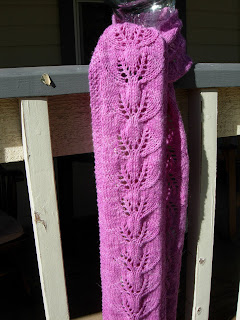 I've been experimenting with dying, as an experienced dyer friend of mine calls the technique, laying it in. That means I have the dye pot heated already and I lay in my skein and don't disturb it. I am in love with the water-color wash effect. This was my first trial and I so wish I hadn't shot this in sun so you could see more clearly what I mean, and of course, I can't take another picture. I did use this technique it on the all skeins I dyed for my felted bags. Now I'm daring myself to try this technique for an entire garment! 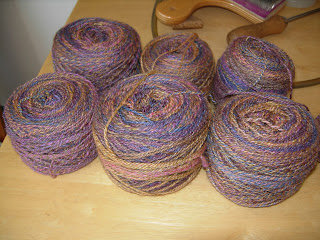 For now I need something to knit. I dug through a bin of already spun yarn and pulled this out. I bought the fiber at Oregon Flock and Fiber Festival quite a few years ago from a vendor called Balls of Fiber. The color pathway had something to with deserts - sunrise, sunset? Either one captures these colors. I calculated that I have close to 1,100 yards. 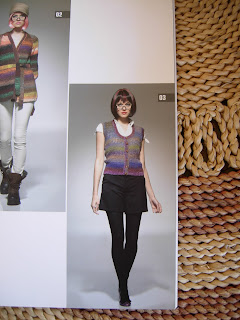 I've chosen this vest pattern from the Catwalk Two pattern book. The bodice is actually in lace but I know I don't have enough yardage for that, so will use plain stockinette. I'm counting on the handspun yarn to be the visual interest. I'll be cutting it really close on yardage, like I've never done that before! 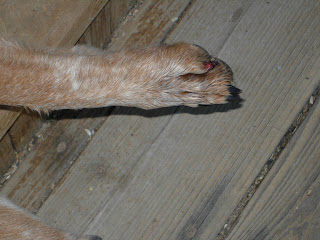 We had a sleepless night last night. I saw Buster come to the door late in the afternoon, and when he put his foot to scratch the door, I saw that he had a dangling broken claw and called to Ian. So much drama and blood, but we ended up with the other dogs outdoors while we held Buster to clip the dangling digit. We were still cleaning up blood today. He slept on our bed, bleeding on the bedding which I've since washed , and Ian had to get up a couple times during the night to give him aspirin. No one in our bed slept well! 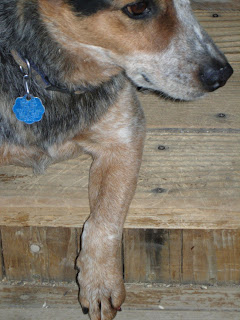 It's going to be a while before he can go on morning walks with me, so today I just took Sammie, and I'm so relieved that she was the only dog with me. We started late, about 9-ish. We hadn't gone far when a female coyote crossed the road right in front of us. I worked hard to call Sammie back, and no soon than I had her back then the male, and might I add it was the largest coyote I've seen, crossed the road following his mate. I thought I'd never get Sammie to come back and was completely shaken afterward. They stood on the hill above and watched us. I wasn't nervous for me. I know coyotes are masters at duping dogs and I knew we were going to be coming back the same way. I was happy, actually overjoyed, to see a couple of horse riders ambling along, and then turn up our road, as we returned. Yippee ka-yay!
Posted by Sharon at 7:19 PM

I thought lace takes less yardage than stockinette (or any other "solid" fabric); am I wrong there? Off to OFFF tomorrow; big morning, I hope!

Don't you just hate it when a puzzle is missing some pieces? I know I wouldn't want to puzzle again for ages! The scarves look lovely and your dog so sad, snif.
And your coyote story, brr. scarry.

Poor Buster! That has to hurt.

The scarf is lovely and so is the yarn for your proposed vest.

Puzzles: We always have one going the week between Christmas and New Years. A jigsaw puzzle is like potato chips to a couple of mechanical engineers, especially if the weather is bad. No one can walk past it without putting in a piece or two.

Scary about the coyote couple. One can only hope they were more interested in their mate than in being a predator. But then that raises the spectre of more little coyotes....

Poor Buster! That has to hurt something fierce.

Coyotes got our dog several years ago, so I understand your nervousness.

I am in love with your new yarn. It's so pretty with the lavendars and peaches in it.

Oh my, what a lot of interesting stuff. Bummer on the puzzle pieces. How annoying! The yarn looks lovely as does the pattern.
Poor Buster! Make sure that the nail hasn't gone down to near the bone. An infection can easily travel into it and then it's a BIG problem. If he's still bleeding you might want to hold off on the aspirin, it is a blood thinner and very hard on their stomachs and kidneys to boot.

Chile powder is a good blood stopper in pinch. Harry knocks his toes off all the time - he has no regard for his body... The claw will grow back just fine.

Very scary about the coyotes. Ceili went chasing after one once - I got in the car to try to find her since she employed her "selective hearing disorder." I found her over a mile away!

I totally understand the puzzle thing - just one more piece...

I just have to tell you this1 As I was reading this post, the phone was ringing. I got up to look at the caller ID and it said Opinion Poll. This is why I don't answer my phone anymore! We think alike for sure.

I love the yarn you dyed. The colors are beautiful! You always do such lovely dyed stuff.

Sorry about the puppy's toe. I know that must have been painful for everyone involved. Hopefully you got a nap in to catch up on your lost sleep.

Poor Buster! I hope he's on the mend. We actually have coyotes in the Chicago area -- Paul sees them in the volleyball area at his work in the 'burbs on a regular basis.

The scarf is just gorgeous! I love lace.

Missing puzzle pieces: that's why I love jig saws on the computer! Do you know Lena Games? She has a new Big Jig puzzle every week on Monday and we're totally addicted to them (never any missing pieces and puzzles in the size you choose)

Poor Buster! That looks painful!
I love that scarf, the color technique is great! I'm going to try it.
I can not abide a puzzle with missing pieces, no closure lol

Jigsaw puzzles - I love them. Even when there are missing pieces - I think that's all part of the puzzle, but 35 missing pieces is a bit much. My husband (another Ian) gets very cross when a piece is missing and when I get puzzles from Oxfam he says he won't do them. You can guess what happens.