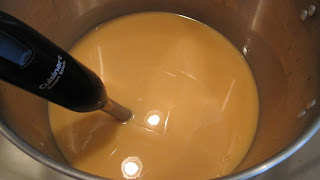 I haven't made soap all winter because it's been too cold. I have to make it in the garage and keep the bay open to ventilate the lye fumes. I made soap yesterday for the first time this year. I'm almost out and have a craft fair just three weeks away. Soap needs a minimum of three weeks to cure. This is Nevada Bar, my most popular soap. 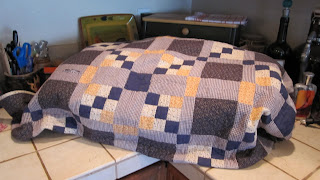 I made it as a large batch, but I'm pretty sure this is the last time I'll make a large batch. It's too unwieldy to manage, just large and an oil mess to clean up. 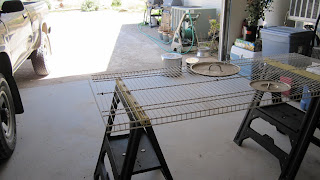 I've come to the conclusion that it's not soap making that I resist, it's the set-up and clean up. I realized that I say I don't like to make soap, but today I realized that the actual soap part is fun. The rest isn't. I have to back the cars out, set up this "table" and drag out the oils - 70 pounds a bucket. 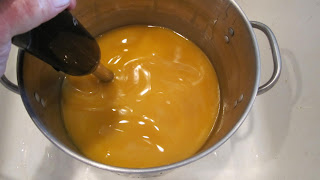 I made soap again today. This is Juice Bar; the color comes from carrot juice. I made half a batch and it was so satisfying. I've decided that the idea of efficiently, making more soap at one time, robbed me of the fun. I'll leave volume to soap makers. I'm a crafter. 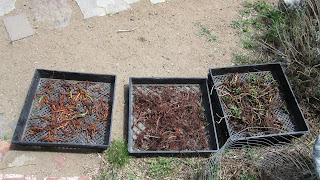 Somewhere in the middle of everything I realized that I had a bag of seriously wilting madder roots and today is the only day that I could do something with them - or lose them. I don't have that much so I scrubbed and chopped them, dividing them into these three trays: roots, stems and tops. I don't know if the different parts will make different colors but I'm going to find out. 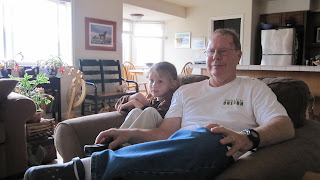 We're babysitting tonight. Alexia and Papa are deciding what movie she wants to watch on Netflix Watch Now. DD Chris has a huge bellydance festival tonight at The Grand Sierra Resort, her troop is opening for the headliner and husband Mikeal is in Texas on business. I don't understand bellydancing but it's Christina's passion and I understand that. 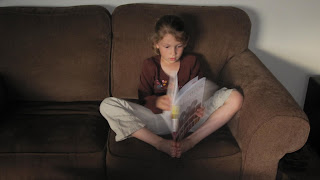 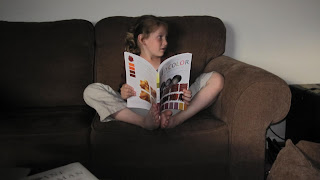 Alexia was captivated by my Wild Color book. I had been reading the section on madder. She got the idea that plants make color and was fascinated by the variety of plants and colors. She was trying to read it and watch her movie, and then she was done - with the book, not the movie. I'm returning her to her mother on my way to the tapestry workshop in the morning. The car is loaded, timing will be tight.
Posted by Sharon at 6:54 PM

Carrot juice in soap? Interesting. Do you add it in with the lye/liquid mixture? I guess it would give a bit of natural colour as well as Vitamin A. I used to make goat milk soap with Lavender EO. I like to keep it natural with no fragrance oils so as to irritate my sensitive skin.

I haven't made soap in several years and I sort of miss it. I only made it for our family, though not for sale. I used carrot oil as a colourant once, which made the soap seem likes bars of pure sunshine.
Have fun at the class!