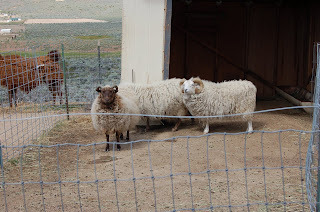 Today was shearing day. Our poor boys need to be shed of these coats, and the weather has been so cool that I'm confident that none of them has molted. It's supposed to be a high of 42 tomorrow with a chance of snow. Good grief. 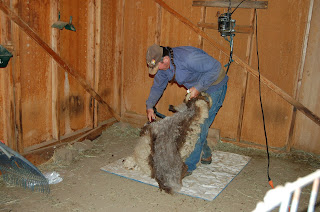 The thing with Devon is that you know the date, but you never know the time. He called about 2:30 to say he was just leaving Yreka so he would be here later in the day. That's at least a five hour drive and he was shearing Neighbor Nancy after us! 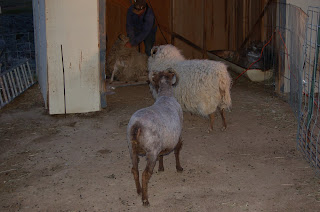 Ollie and Mickey look on anxiously as Robby gets his turn. Devon is also a farrier so was shoeing horses all morning. He and his girlfriend also have a Corriedale sheep ranch. I admire him. 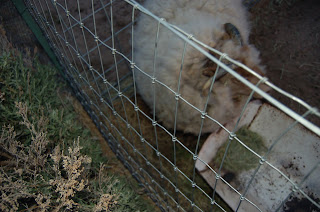 Mickey would watch and watch and then run back to me and have me chuckle his chin. Being last is hard. 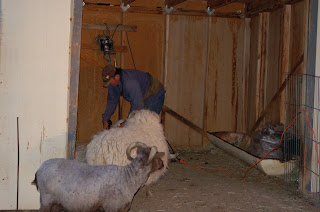 And then he'd run back and look to see what Devon was doing. It's the not knowing that made him a nervous wreck. Devon charges $6 a sheep and $40 to come out. 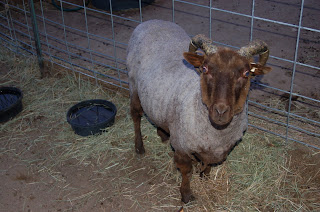 Economically it makes no sense to have these guys, but they have become part of the rhythm of our lives. They're so happy when their coats are off and as Devon says, they're pets. 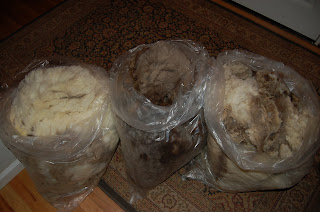 They're pets who make pretty fluff. I really would like to process the fleeces myself this year. We'll see.
Posted by Sharon at 9:27 PM

So I'm not the only one whose shearer is a farrier! Um, didn't you get a black sheep from Mim?

3 bags full of yummy loveliness. Mmmmm... I love the smell and feel of freshly shorn fleece!

Sharon, They're just "Pets with Benefits"!!! :)
I'm sure they are totally worth their keep in just keeping therapy costs at bay. heeheehee! At least they are for me.

And Shetland fleeces are "pearls without price". ;)

We pay $25 per sheep and she does the feet too. I imagine next year with all the lambs born it will cost a small fortune!

Oooo! Look at all that lovely fleece! I just want to stick my hands in it and touch it. I can bet both you and the gang are happy that is over and done with.

As fresh as those fleeces are they would wash up nicely at home. Use the dishpan method, a little bit at a time and before you know it you will have 3 lovely fleeces clean and ready when you are.
Don't over fill the tubs, it just takes longer to get clean that way. Ask me how I know!

The fleeces look luscious. But it sounds like you need some more shearers in your area!