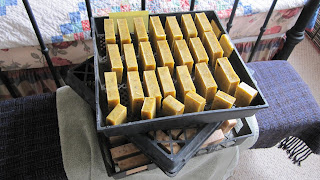 Once I cut the soap into bars, I have to wait at least three weeks for it to cure into actual soap. My brother-in-law, the biologist, explained that it's saponification: the reaction of a molecule of oil and a molecule of lye, and then it has to cure. You can't be in a hurry here. 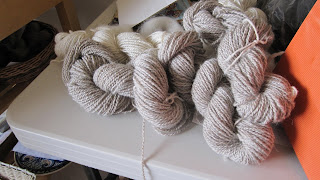 These are skeins of Shetland, waiting to become hat kits. I'm spinning a brown that will complete the color triad so I can't do anything further for now except spin. 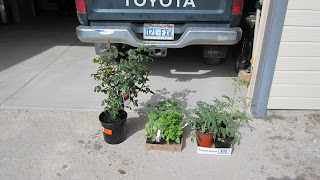 We're waiting to put in our tomatoes and peppers - I'm sunning them. It's been 25 degrees the past two mornings, which has ended the question of whether we'll have fruit on our trees this year. Last year we have a great apple crop and then the deer jumped the fence and took care of that in a night. I cannot imagine being a pioneer here. We're waiting for spring or summer, which ever comes first. 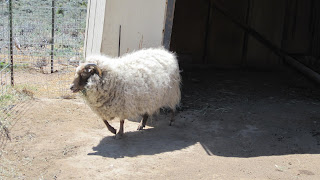 We're waiting to get sheared. Poor Mickey can barely turn his head. Devon says all shearing is late this year because of the late snow. Ordinarily I'd be freaking out, but it's been so cool, I'm sure our fleeces will be okay. This from In Sheep's Clothing about Shetlands: "Evidence of a slight double coat, a tendency to molt, and a rich variety of natural colors indicate close ties to primitive ancestors. In times past, the fleeces were plucked from the sheep (a procedure called rooing) during their natural molt, but now most fleeces are shorn."

I always worry that when shearing is late, that the boys will heave off their coats. I think that displays their common sense. I'm hot, I'm taking this off. I was at a friends a number of years ago and was stunned at the terrible shape of one of their sheep. He looked like he'd been in a bar fight and lost, but they are good Mormons and I know they don't let their sheep go into bars. Wes explained that they hadn't sheared in time and now they were rooing the fleece. I don't know how usable a "rooed" fleece is and I hope I never have to find out.

I'm waiting to see if NOAA correctly forecasted the weather and if we'll awake to snow in the morning. It won't affect my plans, since I had already planned to weave. The dogs will be bummed - no walkies.
Posted by Sharon at 9:02 PM

Do you sell your soap? I'm so sorry spring is so long in coming for you! We've already had too-hot days, and it feels like summer's around the corner.

We've had summer here since March: too hot, too dry.
Now it's autumn (it seems) and for the rest of the week it may feel like spring... You never know here, but this year is strange indeed.

I understand that roo'ed fleece spins up very nicely since you have only one cut end. Only heresay, though.

I remember you guys having snow really late in the season last year, too.

Gosh, I shudder to think of snow right now. Our crops are planted and we need them to grow.

We are also having a cool, wet spring. I still have the down comforter on the bed. Usually I have that washed and put away in April.

Enjoy your weaving and spinning today!

Hey - Correy is coming with me to Reno on Memorial day. I can check with her to see if she's up for shearing, if you're interested. Maybe Mim, too.

It sure feels more like autumn here today. I went out to feed the chooks and could see my breath! I'd wished I'd put on mittens. I hope your spring come soon. We too can't get the tender plants out because it's not only still too cool but we're getting day after day of rain.

My friend had a Shetland who rooed. The plucked fleece was fine to spin.