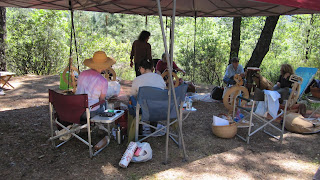 Because of the tremen-
dous rains last year, we set up two large EasyUps and lashed them together. In the morning, it appeared to be overkill but the circle grew to take in the entire area and into overflow. 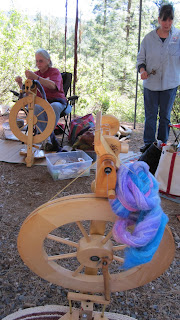 This is the fiber I chose to spin for the weekend and because it's merino, bamboo and silk, I'm spinning lace weight. It's going slow. Sara back there is plying on her drop spindle. She spun more on her spindles this weekend than I did on my wheel and hers is also lace weight. I may have to look into a Golding spindle. I tried one and there's no question that they spin faster and longer. 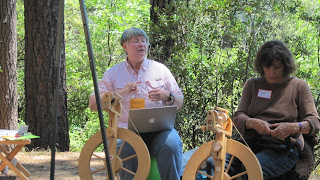 Are you wondering if anyone brought a non-
Lendrum wheel? It was a heavy favorite. A magazine article is in the making so Susan Prince is making notes, and she's reading something back to Sue Flynn. 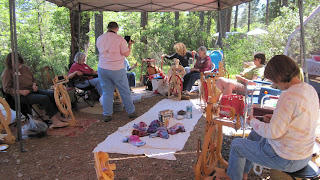 Susan took hundreds of photos, some for the article but most for us. After she's gleaned through them, she's going to upload them so we can enjoy them online. The center area is silk hankies for sale and prelunch nosh. 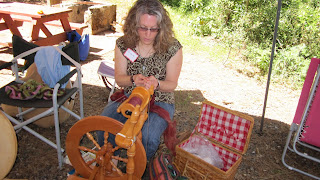 It was such a treat to have uninter-
rupted time to visit with Birdsong. Our last visit was last year at the fair and because we were demonstrating at the same time, we mostly demonstrated. The Foothills is still heavily influenced by the hippies movement of the 60s. The general public are interested and full of questions. It's why I drive the five-hour round trip to participate. The experience feeds me. 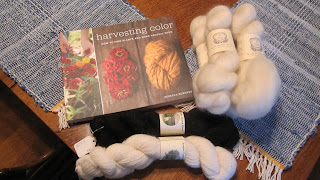 After I had left for Spindle Camp, I saw a message on my phone from Birdsong that I had won her the drawing on her blog and she would deliver it in person on Friday. This is what I won! Birdsong has studied and teaches permaculture. She took it a step further and created a natural dye business in the form of a CSA (community supported agriculture) called Nature's Cauldron. My loot is this astounding book, 8 ounces of BFL roving and two skeins of alpaca/merino yarn.

Here's the irony. The yarn is from Eva at Juniper Creeks Alpaca fibers, the very same Eva you saw sitting on the deck drinking coffee in my last post and my cabin mate for the weekend. More irony. We were the only ones in the cabin on Thursday, an optional early day, and in getting to know each other discovered that we are both practicing Roman Catholics who also both went to Nazarene colleges. Find another one of us, and you will win a prize!
Posted by Sharon at 6:41 PM

The colour of your lont is so lovely, hope you show us the result when ready. And to bad, the link to your price doesn't work.
you must have had a few wonderful days though.

Whoa! Now you have two books on natural dyes. Looks like a research project is in the offing!

Love the color(s) of the fiber you are spinning.

What a fantastic time you all must be having. No wonder you don't mind the drive over.

We did indeed have a wonderful time and lots of in-person visiting... I know that the first time we met, we were both so excited to see that the other was 'real', LOL. Virtual connection is good, but real time together is even better!

awwww! i'm speechless! imagine that! is that even possible? all kidding aside, despite my time was short it was a blast! pufffffff!!!