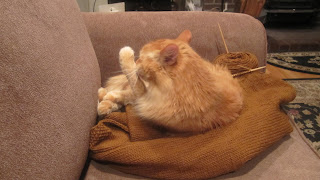 First of all, let me reassure you that I haven't forgotten how to knit. I'm working on sleeves for this sweater and those needles are carefully stowed back against the arm of the sofa, since Charlie has made this his bed for the evening. 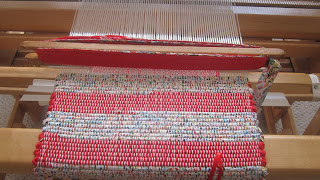 The first set of placemats on this warp is pretty bright and very red. I think another time I would cut the red strips in half. I think the sheet is a queen; that's pretty wide. I just found this shuttle amongst the stuff that Laura shared with me after her mother passed away. It's funky, very narrow and long, and the more I use it, the more I like it. 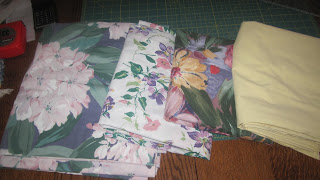 I chose these sheets for the next set - they just seemed to want to go together, like little giggling girls in a classroom. 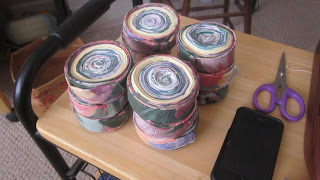 But after I had cut and sewn the strips and wound them into pinwheels, I was having serious doubts. These clearly are too pastel - exactly what I don't want. 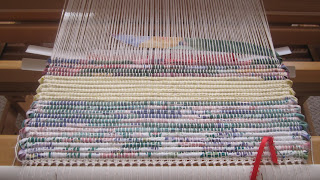 I realized once I had woven this far that the problem is the stripe. I couldn't help thinking of the Sesame Street song - One of the things is not like the other. One of these things doesn't belong. The yellow is wrong. 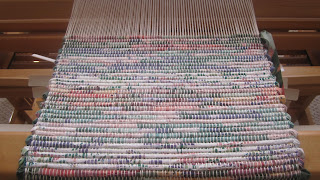 I unwove back and removed the yellow, which means that every time I come to the yellow, I have to stop, cut it out and roll it up for another project, then continue. It also means that I had to cut more strips. But now I like it, so it's worth it. 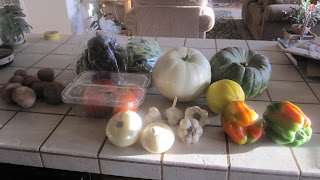 I picked up our CSA (commun-
ity supported agri-
culture) basket after I went to the gym today (same parking garage). I love it that my hospital has a fitness center and also provides access for the CSA community. We got probably the last of the heirloom tomatoes this time, and now its squash, onions, potatoes, garlic, plus the greens are back. We got Swiss chard today - yum.

We only have three more weeks left of this year. It has been fascinating to watch the produce change with the seasons. We spent $500 to have fresh local organic produce for six months, which came to less than $20 a week. The food is so dense that our grocery bill has plummeted. The cost seems expensive upfront, but I know we got a real deal. I so appreciate our local farmers - they've been on the same farms in Fallon for generations and they're finally getting rewarded for the standards they have held. I like to think of that as being the American way.

Ian has been telling everyone about "my" squash dish. I got it online and the recipe is below, though I halved it for just the two of us. I made the leftovers into a patty which I microwaved for breakfast and then topped with a poached egg - yum.

LOL, I rather like the red striped mat myself and I agree, the yellow needs to be used somewhere else. Maybe mats with more variety of vibrant colors. Oh, how about some hot yellow, tangerine and lime green mats? ;) Mixed with some black and white might make a fun and summery placemat.

I think all projects should be "pre-haired", Rodger does too.

You were right: the yellow just didn't fit! Don't worry, those strips will work in another project! Thanks for the recipe...how can you go wrong with "butter flavored" crackers!!!

Love the red in the woven placemats. What a great pop of color!

Charlie's such a cute kitty. Thank you for your kind words on my post, Sharon.

I just realized that the shuttle that you like was made by my grandfather, so you have a cross-family (he was my dad's dad) heirloom!!

I'm glad that it's getting loved and used for the purpose for which it was intended.

Up until the last couple of years I had not been fond of squash. My Mom has always loved it, so when I started showing an interest, she got all excited :) I will have to try this, if for no other reason than to share it with at one of our lunch/cribbage dates :)
Your weaving gets more interesting every time you post about it!

I agree with you, the pastel mat looks better once you removed the yellow. Nice work, Sharon. I hope you find your missing strips for the mat you started. I liked the colors.
Jenny in Charlevoix the Beautiful