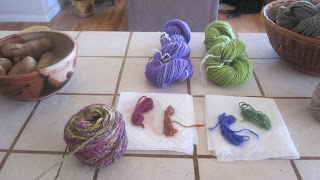 I went over to Mim's on Wednes-
day and came home with six fruit jars of Procion dyes mixed in a 10% solution, three warm primaries and three of the cool. I decided to play with color this morning. I've not been satisfied with those two skeins so decided to try a little color tune up. I started by putting samples in a weak dye bath of the warm blue (on the right) and didn't care for either result. I did the same with the warm red and was happy to find a cure for the plastic lavender. However, it turned the green sample orange and I decided to leave that skein alone. I had started a hat with the multicolor in the foreground, using an olive for contrast. Boring. I'll rip back and substitute my new pretty color as soon as it dries. 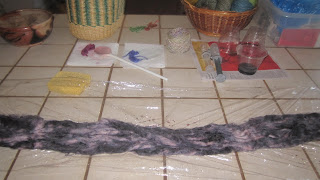 While she was mixing up my dyes, Mim talked about the DNA method she uses to dye roving. She says she learned it in the Charlene Schurch class we took at least ten years ago. I was there, but I don't remember this at all. She mixes 60 cc of one primary and 20 cc of the two others in a cup and then pours them over 4 ounces of prepared roving and says that the different colors strike at different times. I've had a bump of Panda for at least a year so decided to dive right in. 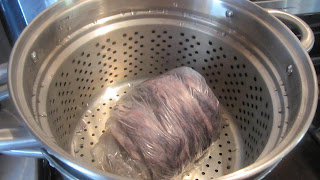 I was well into this before I realized that it's been so many years since I dyed this way that I don't have any plastic gloves. My hands as a pale shade of this roving, slightly darker around the cuticles. It's in the steamer - 30 minutes to go. 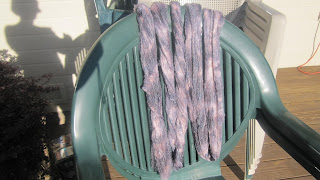 I had used 60 warm blue, and 20 warm red and yellow. This was certainly a surprise but the roving took up all the dye and rinsed clear. For the first time, I didn't felt my wool and that is a major victory for me. 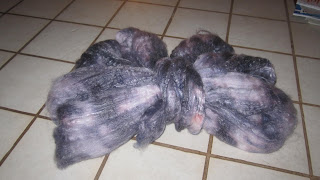 And there it is, ready for action. It looks like I'm going to get a gray and pink combin-
ation but I won't know until I see it drawing on the bobbin. It's sitting right by my wheel. I think the element of surprise is the attraction for me. I have no idea what I'm going to get - like Christmas.
Posted by Sharon at 8:03 PM

Playing with color!!!! What fun!!! It looks like you have some beautiful wool to spin.

Oh, I love the way your dyeing turned out. I use acid dyes, what's the process for procion on wool? I have lots of procion dyes I use for warp painting.

I don't know how we do it, but again we were doing the same thing at nearly the same moment. I hadn't dyed for quite a long time and loved our dyeing day - and the results - last week. Now we can spin!
Your colours look promising!

It's nice when a dyeing experiment ends with such beautiful results. It's lovely ..

I was at that class too, and don't remember hearing about that - but of course my brain is self-purging at an alarming rate, lately...

Looks like fun - I can't wait to see what the fiber spins up to be!

What a sheen that roving has - I can hardly wait to see how it spins up.

Playing with color is always fun. I just reheated some madder left over from Dye Day and I'll strain it in the morning, add a mordant (leaning toward copper for some purples) and dunk some yarn to see what I get.

That is what makes dyeing so fascinating, never knowing exactly how it will turn out. Congrats on not felting it! It's hard not to do that, I know, LOL

That looks like so much fun! PRETTY fun at that!