Monday Monday, So Good to Me 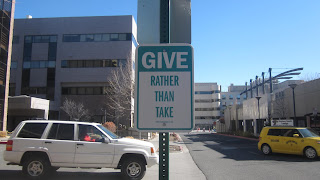 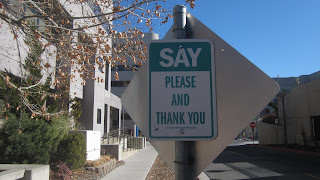 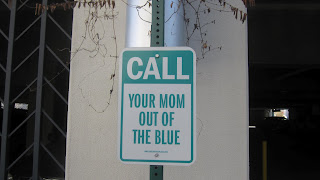 I went to the fitness center for a swim before my art class on Friday. I love these signs that are scattered around the St Mary's campus. And if my son is reading this, the last sign is for you :) I had run some errands, including buying a roll of contractors paper since I couldn't find corrugated paper rolls and was looking forward to being buoyant in the water. 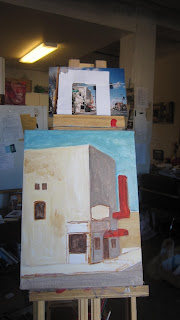 I told Erik that I wanted to paint a building but when I was setting up I realized that I had left my reference photos on the dining room table. I had taken them out of my art supplies to do some sketching and so I had to use one of Erik's photos. I'm not that familiar with the building and the photo wasn't clear. With that handicap, I'm still coming up with a reasonable representation. I'll finish it this week and then will paint the building I had wanted to paint next week. This was a really ambitious project - way over my head - but I wanted to try it in this small class because I knew I would need a lot of help. 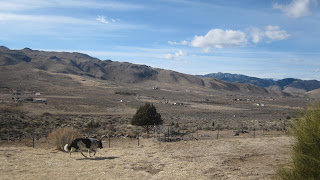 Yesterday was an absolutely beautiful day. It was only 47 degrees but the birds were singing their hearts out and since the wind wasn't blowing, I put on a sweatshirt, a down vest and my mitts and read on the deck. I've had a very hard time finishing A Tale of Two Cities, though I can say that I will never think of the French Revolution in the same way. It's a powerful and effective book. Book club is tomorrow so I was cutting it pretty close. 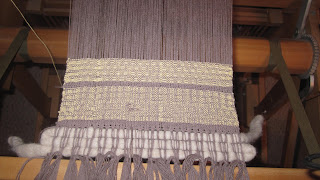 This is the third and last sampler from Robyn Spady's workshop in October. The threading is for Overshot. I struggled with the same warp again and finally came to the conclusion that I do not like UKI. I'll stick with with Valley Cotton from Webs in the future. It was insanely sticky. The cut ends would cling to each other and it refused to slide. Four warps didn't get tied in and because it was a sampler, I threw in the towel and but them off. It's not working for me. I'm going to cut it off, add in the missing warps, resley and do it right. 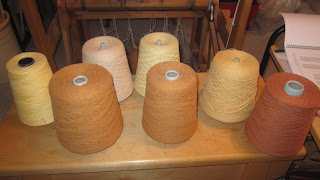 But first I need to have some weaving fun and am warping with all these colors for dishtowels. It's a block pattern so I'm randomly picking up a cone - well, probably not quite randomly since I'm alternating dark and light. I was almost late to my CERT meeting tonight because I couldn't stop. Oh, and my security clearance just came through. I just need to be fingerprinted and then I'm O-fish-al. 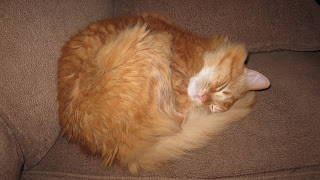 And in case you were wondering, Charlie is still the boss.
Posted by Sharon at 8:58 PM

Nice result in your art class! I like your painting. This is one thing I could never do well myself.
Warps tend to be sticky and are misbehaving until the weft has passed the breast beam. Then it often gets better. It's because the yarn has been handled too much by threading, tying on etc. It would be wise to leave what you've done now on the loom, attach the missing ends and weave on. Just my opinion, of course and probably you have already cut it off.

Did you notice that your yarn matches Charlie?

Oh Charlie yarn. How special! I know you would like using the organic cottons from Chamomille, they are so wonderful. Note to self, buy more I'm getting low on those myself.
Good job on the painting...so, has the sign worked?

those colors are going to make great towels!

I noticed, too! The yarn matches Charlie. They will make lovely, sunny towels.

Wow..you have been so productive! What block design are you using with the "Charlie yarn"?

Dickens....because of his birthday, it's almost impossible to lay hands on a Dickens library book. Hope your discussion today is good.

Congratulations on your building painting and the CERT acoomplishments!

I love the sunny colours of your new towel project. They do match Charlie, really nicely!

The signs are awesome. We need more of those scattered around everywhere!

I tend to try stick with a warp and figure out how to make it work. That being said, I have cut off a warp just because it was way too frustrating to deal with. Sometimes it just isn't worth all that effort, especially if you don't like working with the material.

I have to wonder if, since UKI and Halcyon's Homestead Cotton are the same, if Webs' Cotton is also UKI and you were just lucky?

I like the colors, love the painting - reminds me of something in North Park.

And now that you have a security clearance, will they call you on the phone?

I'm glad I'm not the only who thought the yarn is the same color as Charlie.

I love the signs :-)
And the yarn colours are lovely, like charlie LOL.

Alexia liked the picture of Charlie :-) He even looks like he has a little smile on his face.