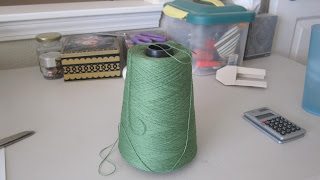 I took a picture of this cone several times and even though I took it without flash, it still doesn't display the hideous color of green that it is. It's from Webs and I liked it on the computer screen. I think they had trouble getting an accurate read of the color too. 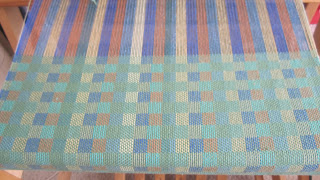 In with the other seven colors it makes a nice green sea glass towel and tones down the turquoise a bit. 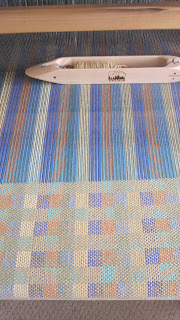 So then I used a gold weft and with all the blues I think the towel looks more green than gold. 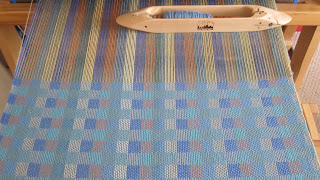 Of course, blue weft makes a blue towel. I'm always amazed at how different the towels are, one from another, when they all have the same warp. I love that part of weaving this draft. 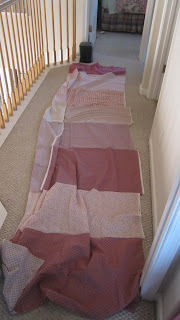 I finished the third of seven rag rugs I have warped on Miss Millie and am preparing strips for the fourth. Linda Lindsay was telling me about the way she sews strips together. After she sews all the pieces, she sews the end and beginning piece together to form a tube and then cuts them in a spiral with scissors. I was trying on follow her directions with some of the pieces Benita mailed me, leftover from her projects. There's a lot of pink, so in spite of my misgivings, I'm going to weave a pink rug. I was just about to sew it into a tube, when I realized that I could add more pieces and then efficiently slice them with my rotary blade. This is as far as I've gotten. I'm going to add more strips until the length combined is sufficient to fill a rag rug bobbin and then I'll slice them all at once. I think it's going to work and produce some interesting color changes, without having to sew the 3" strips together, one at a time. 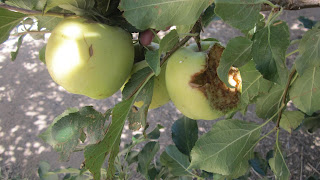 This is our new bird feeder. Two scrub jays have become very territorial about it. Ian was in the back and heard a ruckus in the apple tree. A squirrel decided to help himself and the jays were disabusing him of that notion. They ran the squirrel off which is more than our dogs can do. We've come to appreciate our rowdy jays. They ran off a small flock of cow birds earlier this year and also a large flock of obnoxious black birds. 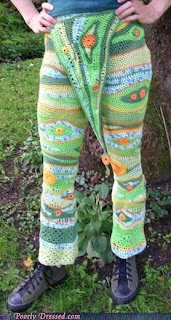 Who says you can't crochet apparel?

Your towels still are lovely but If I can say that about the crochet.....? hmmm, ;-)

I once had a crochet bikini (that I had made). It was great for sunbathing (remember when we did that on purpose?), but not so great for swimming...

I was loving the towels, and your story about the blue jays, and then suddenly, there were the crocheted pants...........o.m.g.
I don't know what to say.:)

I love the interplay of color on your towels.

hahahahah love the pants :) i needed a good laugh today and you sure supplied it :)p.s. i have a towel warp chained and all ready to dress my loom with as soon as i finish up an overshot sample. thanks again for the draft!