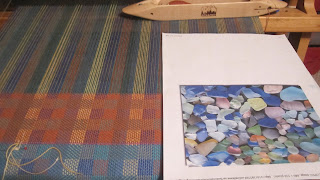 I've finally been able to spend a day in my studio. There have been a lot of distractions lately. I'm cruising through my latest interpretation of Sea Glass. This is the last towel on today, along with my inspiration picture from Google Images. 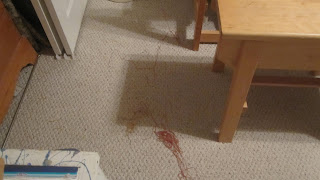 And this is all the warp on the floor that I tore out to remove a too-bright yellow substitute for the broken warp in the first image. I used up several cones of variable yellows on this warp, but I think this substitute will be acceptable. The first was horrible - bad judgement.

I have had the most broken warps on this set than I ever have. Some of the UKI that I bought from the Georgia Company seems to be especially tender. It makes me wonder how long that yarn has been in storage. Broken warps aren't a tragedy but they're certainly obnoxious. 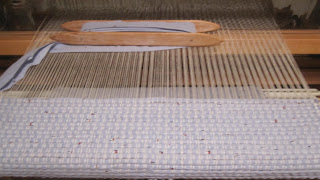 I have one weaving bench and two looms so I shifted over to work on this rag rug today. My booth space at the craft fair is supposed to have rag rugs. My shortcut to colorful stripes was cut short today with the realization that I would need a bias-tape maker and then would have to run the strips through it, ironing them into shape - ugh. Thanks to all the weavers who helped me with this. Hilary, who had brain surgery just two weeks ago, started me on the path to getting this sorted out. I smile as I hear my mother saying - there are no shortcuts. 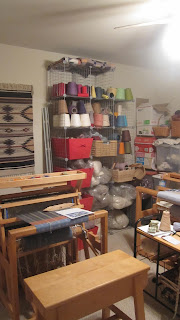 I've added higher storage space in my studio, freeing up some of my meager floor space. Those top two units had been under the window with Charlie's bed on top so he could sleep in the sun. I spent the bulk of the day here, and when I got a text message from my youngest son that he and Julia would be by today to pick up the things they needed to take to Oregon and his brother instead of tomorrow, I asked if they'd like to have an early dinner. He said, Absolutely! It's six hours from our house to Bend so I thought it would spare them that stop and give us a quick visit.

And right after that I got a text from Kerry asking if she could stop by with friends about 6:45 to shop for towels and soap. It turns out the friends are visitors from England and they wanted local presents to take home for their house sitter. The green to the left of the yellow cone is American money. That was a fun conversation, about how all our currency looks the same. Their paper money is different sizes and colors, depending on denomination, and their coins have different edges. They find our currency bewildering. I told them there's a reason we call our money green backs.

When Ann chose a towel from the Yuba River series, I also gave her my inspirational photo that I had borrowed from Beryl. They suggested I look into images for the North York moors and also England's rapeseed fields. I have and both have fabulous color potential though not much color variety. England is so green. They left with something and left me with something. 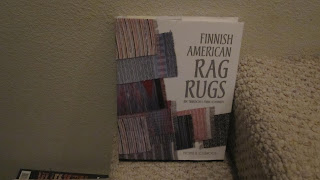 Meanwhile, I pulled this book out again. It's mostly an oral history of tradition but I thought it might give me a little inspiration, and then an unanswered question became obvious. I've asked every rag rug weaver I know if they weave on two or four harnesses. Right below the photo they listed the weaver and the harnesses. I had the answer here all along. Unless they wove a twill, all of the rugs were woven on two harnesses. Thick headed German? Raising hand.

Sounds like a fun and exhausting day. Your towels are lovely! I think it's pretty nifty how you get your color inspiration.

i have that same loom bench :) i really like it but every time i move it the drawer wants to shoot out. it's funny that with all the weaving equipment and tools i own,its that silly bench that misbehaves the most :)great towels as always! i have my warp wound and waiting patiently.

Lightbulb moment. I have been wracking my brain for new colorways for yarn and fiber. I painfully admit that other than Michelle providing me with a couple of pictures (which I need to figure out how to use - they're cool) I never thought of using Google. DOH!!

I wouldn't have thought to use 2 harness, because I have 4... so you're not so stubborn!

Why not thread your warp on four shafts? Plain weave may only use two shafts, but it also gives you the opportunity to do twill should you so desire. Also, turned taquete which could be very interesting in a rag rug.

Maybe some new rag weaving books would be a good addition to the guild library?