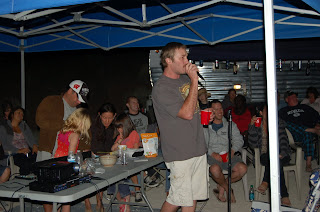 This was the biggest gathering we've had yet and the action never stopped. The Inouyes brought their karaoke machine so Saturday night we projected the words onto the side of our house and caterwauled to the music. I laughed so hard that my abdominal muscles were sore afterwards. 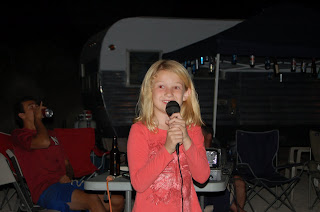 Everyone was included. I didn't know the modern music but the kids sure did. 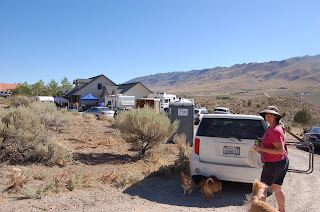 We had close to a dozen dogs and they all managed to get along, except Buster who will go to doggy jail next year. We rented a porta-potty this year and it was full after four days. That was another of stepson Dougie's good ideas. Oh, and he cooked spaghetti Thursday night after driving all the way from SoCal, announced the horseshoe tournament on Sunday (yes, we had a PA system), then cooked dinner on two barbeques. 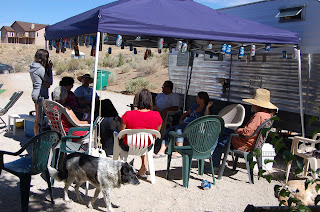 Josh created a beer garden on the side of his trailer. He completely renovated this trailer which he bought out of a snow bank for $250 and removed everything including the electrical wiring. Where the outlet used to be, he inserted a tap on the outside and had a keg of his own home brew hooked up to it. Interest in home brewing seems to be growing and since so many of our family and friends are involved, Josh and Doug set up a tasting event at 4:00 on Saturday. It was enormously popular and a large animated group were engaged in sampling and trading recipes. Brewing seems to be a guy thing. 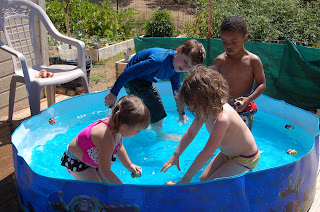 Margi brought a wading pool for the small children and that was a big hit. These are all cousins. 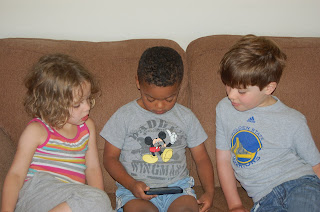 The kids would play hard outside. We have a large collection of trucks, some bicycles came as well and Nick was giving the kids rides in Marsh's quad. Then suddenly I'd come across a group in some quiet activities. I know they remember these weekends and look forward to them again, as we all do. 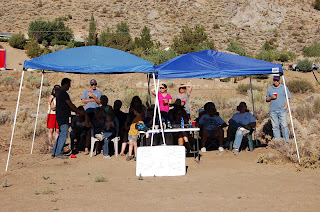 This was certainly the largest horseshoe tournament to date. Ian and our neighbor Tom created a second pit so two games could be played at the same time. With one pit, it used to last all day. Everyone started the day at Joe Winter's pottery studio where he does a pottery demonstration and the studio is open for shopping. Several of our group also ordered custom pieces. 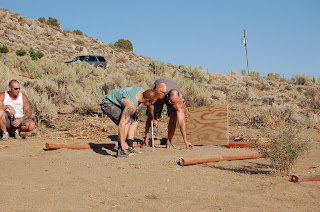 This tournament is also one of Dougie's ideas so when it came to the final playoff game, he went around and made sure everyone came to watch. He announced a most unusual occasion - the four in the playoff game were Ian's son, his godson, his stepson and his grandson. This is grandson CJ and stepson Josh checking to see if there's a score. 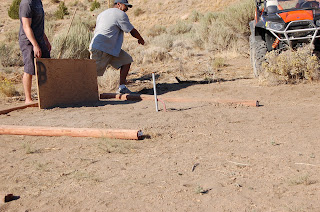 This is godson Chris and indeed there was! 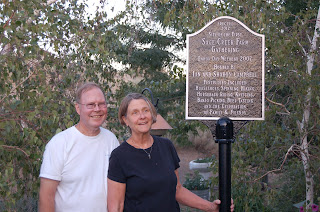 Saturday afternoon we were presented with this. It's a brass monument, just like you'd see in a park or historical site. They had been planning for this all year. It acknowledges the first Gathering which was in 2007. Sunday was the installation. We dropped a bottle of my home brewed peach wheat ale down the pole, the one I made with Josh when we visited in June. It didn't break because it was displacing air but made a very interesting Three Stooges sound as it spiraled down. Then Ian and I dropped in 2012 pennies. Our family and friends lined up to drop in a quarter, make a wish for us and give us hugs. It was like a wedding reception, which is ironical actually, since tomorrow is our wedding anniversary. We've been married 15 years. This is the best anniversary present ever!

I uploaded all 220 of the pictures I took to Flickr. If you care to watch, you can see the slideshow here.

Sharon, I can't express how wonderful this all sounds, and I think YOU deserve some credit, my friend!

What a terrific weekend and awesome memories! Love the pictures and I really love the monument. Great idea. You have a really good family and set of friends.

Sounds like a great time was had by all - Happy Anniversary! T.