I appreciate all the kind thoughts and sentiments this week after our loss of Eddie. It was a very busy week, getting ready for Thanksgiving and family and the last craft fair of the year.  It helped to have so much to look forward to that I couldn't dwell on the recent events. 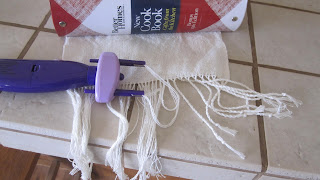 I was struggling with the labor intensive fringe twisting on scarves, trying to get the last four finished and dyed for the craft fair.  Cindie found this for me online and sent me the link.  I immediately ordered it - a Conair braid twister.  What a difference the right piece of equipment makes!  I found it best to sit at the counter and weight the scarf.

Thanksgiving was wonderful this year.  We've had a 20 year tradition of spending it with DIL Missy's parents, Marv and Julie.  They began inviting DS Matty and me, back when I was married to a casino dealer who liked to work the holidays for the extra money.   Over the years the attendance has varied and changed.  Julie's mom and my mom were once a part of it.  Now our moms are gone and we're the grandmothers.  We had four grandchildren with us this year.  Missy, Julie and I enjoyed a raucous game of Apples to Apples, as the kids are now all old enough to read.  I have SO much to be thankful for. 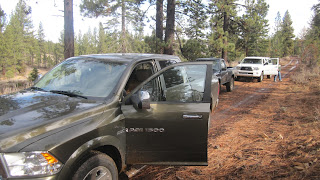 We continued with our tradition of cutting Christmas trees on Black Friday.  Josh and Missy borrowed Marv's truck as they'd driven down from Oregon in their Jetta.  It was just them, Ian and me and our friend Amy - a very small entourage this year.  The weather was mild, all snow had melted and note the road - it was mud, mud, mud.  Four-wheel-drive is essential as all depressions in the road were in fact small ponds. 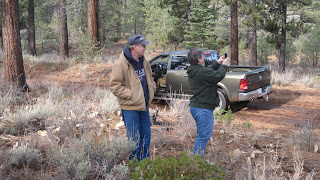 Amy is a photo buff and realized that she had forgotten her massive camera.  No matter.  She had her new iPhone 5 so was showing Ian how she can film a panorama. 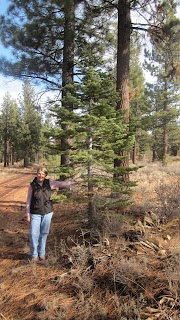 Do you not think I would have realized that this tree was very large?  We had looked at several but this one had the straightest trunk and fullest growth. 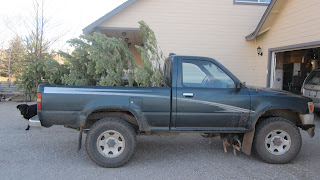 The tree absolutely dwarfed our little Toyota truck.  I think in the future we need a no-tree-longer-than-the-bed-of-the-truck rule. 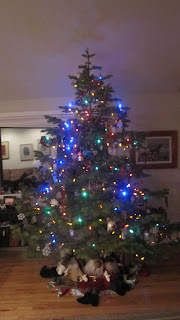 The tree dwarfs our living room!  Ian hates to cut anything off the tree so we had a few testy moments but he did cut more off and then later admitted that I was right.  He's awesome.  It's really a pretty tree, but it's going to be a dance to get around it on Christmas Eve with a house full.  It takes me about three hours to hang all the ornaments.  We've collected so many and they all represent friends and memories.  We'll enjoy this tree for the next month.  We have stopped exchanging presents because we have what we want so this is our gift to us. 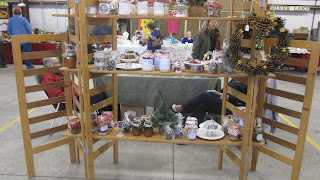 The craft fair yesterday was a disappointment, few vendors, few shoppers.  There were three major craft fairs the same day, though I did well.  We had an informal pow-wow while breaking down and have decided to flip the time to Spring, before Easter.  Meanwhile, I was admiring this unit that Steve built for Carol and trying to decide if I could get DS Josh to make something like this for me.  Carol offered to let me borrow it.  I know she means it and I'm really grateful but I probably need my own display.  I wonder what Steve would charge.  Hmmmmmm.

That is some christmas tree!

Sharon, I am so so sorry about Eddie. I know just how losing a good friend like that feels. Big hugs to you both and the some extra love for the two pups who no doubt re also feeling the loss in their own way.

That is some tree though. I'm eyeing a few on our property for tree duty this year. But nothing to rival your beauty!

That is an amazing tree. It will be one people remember!

What a lovely Christmas tree! I miss putting one up, but with Pete and Dylan, there'd be no way it would stay in one piece for long.

Too bad about the craft fair. I'm glad you did well, though.