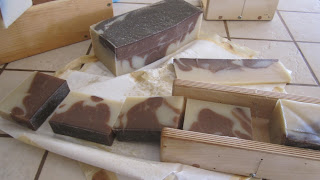 I decided to introduce two new soaps at the last minute for a little holiday note. This one is Holiday Spice Cake.  I'm using the cold process/oven process method.  It requires the molded soap to be subjected to 175 degrees in the oven for two hours, where it then remains for an additional 24 hours.  This technique speeds up the saponification process by four weeks, but it also burns off some of the scent.  Since I've always maintained a low-scent profile in my soaps I thought I'd try it.  I had to increase the essential oils so the trade-off is time versus expense. 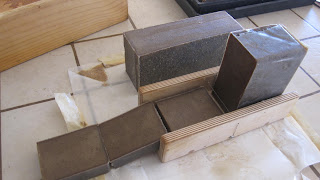 I cut bars from the second holiday soap today.  This is Juniper Berry Tea and it's really dark because I was really exuberant with the green tea bags.  The juniper berries are from our property.  I collected and dried them, then milled them and then sifted them to remove any scratchy bits.  I can't wait to try them.  They'll be ready for the craft fair in two weeks. 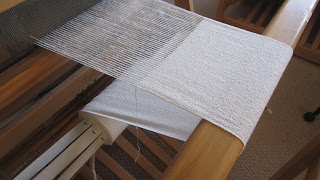 I finished the four scarves that I had on my loom and have cut them off and am twisting the fringe.  Thanks to Cindie I have a battery operated fringe twister ordered and en route to me.  I appreciate the Schacht hand-crank apparatus and anticipate the electric one all the more.  I haven't decided what colors I'll dye these yet.  Four scarves, four colors? 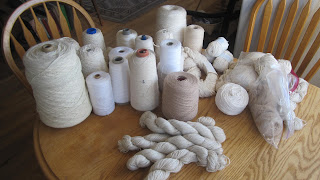 You know I've said that I don't have a fiber stash - I don't!  It's not a product of self restraint as much as a lack of access to acquire.  The scarves I've been weaving are from four cones of rayon/silk I bought from a friend who was moving many years ago.

I got an email over a month ago from Jayna, a woman who found me on the Internet and who wanted to find someone to adopt her fiber stash.  She said she used to be a weaver and wanted to move her yarns along to someone who would use them.  Over the years I've gotten all kinds of contacts and have been glad to facilitate when I can. So when I finally met up with Jayna yesterday, I had expected a box of acrylics and was totally unprepared for this cache, about 40 pounds worth of mostly bast and bast blend yarns

I've sorted through it today and have identified about half, but I'm going to have to appeal to my guild members to help me with the other half.  What Jayna gave me is not cheap.  Can you imagine how astonished I am?!!  Now I have a stash!  I have a back order for natural Tencel from Webs because I've wanted to weave scarves from painted warps - Cindie sent me instructions last April.  Yeah, I know, but I've been thinking.  Look at all the painted warps in waiting that are sitting on my table.  Santa came early, from 2014! 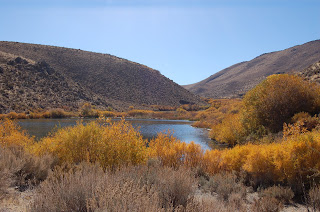 This is one of the ponds on Ross Creek and it's one of the things that captured my heart on my first visit to the valley.  We're expecting a storm tomorrow and I wanted to get pictures of autumn before winter collides with it.  I'll post the rest of them another time.

Oooo! I want to try your Juniper Berry soap when it is ready and if you have any left over from the show.

I'd go with 4 different colors on those scarves. More fun that way and people can choose the one they like best.

You are one lucky weaver! That yarn is great potential for you.

You have some lovely golds and olives/taupes in that autumn photo. Those would make some lovely towels combined with some creams.

Both soaps sound terrific, and wow, was that a generous gift. Time to weave your heart out!

Those soaps not only sound great but they look perfect, so evenly cut and perfect looking.

You'll have fun with that stash!

WOW, instant stash!! How cool is that! Now you'll get to learn about dyeing with cellulose fibers, which is quite different than protein fibers. I can do it but I'm not very accomplished or comfortable with it. I bought 10 lbs. of 8/2 and 5/2 cotton from Henry's Attic - it has way more twist in it, and seems much stronger and less unbalanced than the other stuff. But, it's white. This means I'm going to get very familiar with dyeing with fiber-reactive dyes. Should be fun!!

Love that last photo - so pretty? Any chance you could mail me a sliver or chip of that Juniper Tea soap? I'm picky about my scents but like strong woody smells like cedar and such. If I like it I want a chance to buy some before it all disappears!

Stashes are good for the soul.

That last photo is stunning.......it should be framed.

The soaps sound yummy. I still have one more of your bars. I'm saving it for a special Thank You gift need.

Have fun with your new stash and the dyepot!!

Love the last photo. It reminds me of a Wallace Stegner book cover.

BTW, I did read The Language of Flowers and loved it. Thanks for the recommendation!

And finally, did you see this post on Etsy: How to Rock It at a Holiday Show