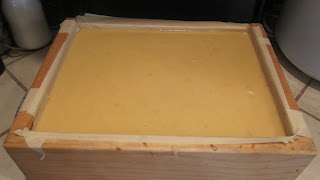 I didn't think ahead about how doing several craft fairs would impact my soap supply and ran out of two of my most popular bars.  I've had to make soap twice this week.  This is what it looks like in the mold, then I cover it completely for 24 hours before I can cut it. 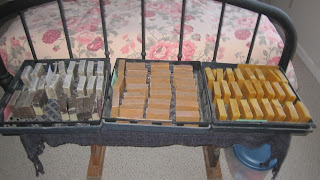 This is what is currently curing.  I have soap down at Joe Winter's pottery open studio sale for the next couple of weekends.  I stopped by the Artists Coop on Wednesday and my display was decimated.  Fortunately I had enough backstock to fill it but I can see that through December I need to stop in each week and make sure my display is filled.

I made three new soaps last month and the last one was a disaster.  I've been reading about CP/OP soap, which is cold process/oven process.  I make cold process soap, the term for soap made with sodium hydroxide and oils.  Oven process speeds up the curing by 3-4 weeks but it's risky in that the sustained heat can burn off some of your essential oils and worse, can turn the whole thing into a volcano.  I was cocky after two successful batches and made Pumpkin Ale.  The oven was filled with soap oils and poor Ian had to take it apart to thoroughly clean it.  I thought I'd gotten it all until the house filled with smoke while Alexia and I were preparing to bake.  I appreciate smoke detectors but not when I'm hearing them.   I'm cured of curing in the oven - no thank you!  I'm still going to try Pumpkin Ale again but not in the oven. 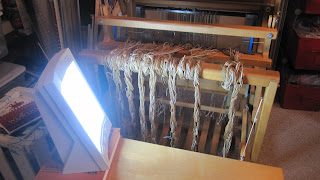 I've been flagged with droning exhaustion and it wasn't until this morning that I realized I haven't been using my SAD light.  It's been storming for 24 hours and raining for twelve, making the studio impossibly dark to work in.  I aimed my happy light for my face while sleying the reed, since I have to be pretty close to see, and it was perfect.  I got the benefit of the light on my face and my work was wonderfully illuminated. 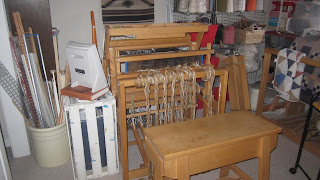 I've moved around to the back of the loom to thread it and have moved the light right with me.  I've never used the light for more than a half hour in the past and got a couple hours worth, which is what my doctor recommends.  What a difference that light makes!  I cannot believe I forgot all about it.

When I got myself on the sub list for school librarians, it was only for the middle and high schools, since you have to be licensed.  Elementary school librarians are considered classified and require a different application and are on a different list.  When I spoke with Shirie and she put me on the certified list, she said it would be a while before she started interviewing for the other.  Then this week I was engaged in soaping making and laundry all day - didn't log on until after 3:00.  She had sent me three emails.  She's interviewing, needed my classified application and had already set an interview date for me - next Wednesday afternoon.  She wants to get me on board before the January hiring freeze.  It helps that I know Shirie.  She was on the county library board for 15 years so knows me and knows my work.  Wow! 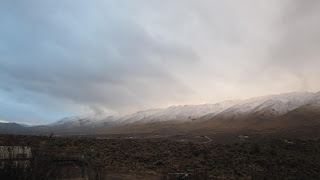 We seem to be in between storms at the moment.  The original forecast called for 6-8" of rain by Monday but I just checked and NOAA has downgraded the storm slightly.  I think a lot of the energy is being spent on the Western Sierras.  Technically this is the rain shadow and annual moisture is in the 9" range.  My first sub job is on Tuesday and if it's this wet, I'm going to be saddled with a classroom of children getting excited for Christmas and no playground time.  Stay tuned for more adventures of Super Sharon! On second thought, make that Stupor Sharon, because that will soon be my state.

When I used to make a lot of soap, I always wondered about the oven processing and it's possibilities for failures. One time I tried hot process, on the stove. It took so long that I decided that I'd rather have the drying time of cold process than spend a whole evening stirring soap!
That is an amazing photo of the clouds and the mountains. So beautiful!

I can see why your soap sells out so quickly. I love the ones I have of yours and am hoarding the couple of bars I have left until after Christmas.

I think I am going to have to take your advise and get a SAD light. This driving to and from work in the dark is weighing on me. All I want to do is sleep.

Good luck with the new job. i hope it works out sell for you.

Anonymous said...
This comment has been removed by a blog administrator.
11:53 AM