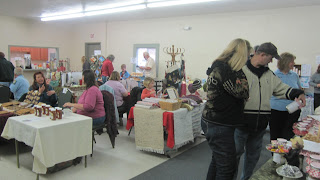 Yesterday was our valley craft fair.  It was organized by volunteers and was held in the same room as our property owners association meetings.  I didn't count but I can't imagine there were more than a dozen booths.  It rained and valley denizens came to shop.  The room was stuffy and loud.  I finally opened a couple of windows. 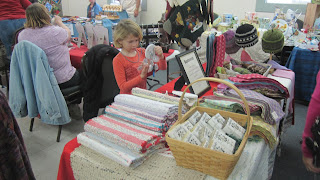 This was my space and my helper working on her Kumihimo project.  My space got a little mauled.  It's hard to keep a table tidy when it's strewn like mine was.  I've learned though that you need lots of stuff to attract buyers.  I did surprisingly well.  And I had a great time, visiting friends and meeting neighbors. 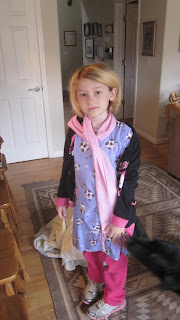 I promised Lexi Lu that she could have the pink scarf - it's her favorite color.  I just wanted to have it in my booth to fluff up my inventory.  She was absolutely thrilled and as we got ready to go home this morning, she tossed in on, in spite of the fact that her top is her pajamas.

Getting ready this morning was a little complicated since we realized that our old dog had hit the wall with the pain from his cancer.  We went through this before with our dog Sunny.  Our vets told us to enjoy her and that she would let us know when it was time.  This morning Eddie let us know it was time.  So while scrambling to get Alexia packed and home before 9:30, we were trying to comfort Eddie and calm the other two dogs.  They were both frantic from Eddie's discomfort. 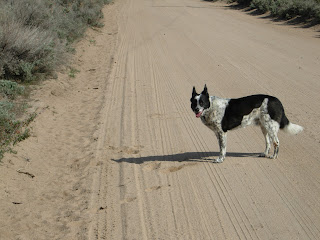 This is Eddie on a walk when he was healthy.  The cancer began in his right shoulder and seriously reduced his mobility, but with medication he continued to be engaged in our family life.  Last week we realized that he was reaching the end. 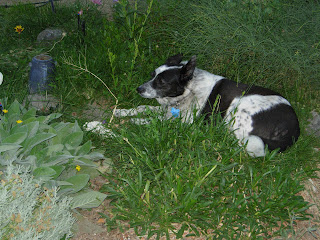 Eddie is the best dog I've ever had.  He was an absolute gentleman, intuitive and polite.  He had the unique ability to sit next me when I was sitting on the edge of the deck and somehow slide his nose under my arm so that suddenly I would have my arm around him.  He could communicate with his eyes.

I dropped Alexia off at home and called our vets from the car to tell them I was coming.  They were amazing, ready for me and put us immediately in a treatment room.  Eddie was miserable and pacing so I sat on the floor with him, stroked his face and told him how wonderful he was.  Once the vet came in, it was over quickly and the pain and the life in his eyes went out.

I'm so lucky to have had him for ten years.  Ironically, when we adopted him his name was Lucky.  I said - good grief.  That's like the joke about the three-legged dog with one eye named Lucky.  I renamed Eddie after Edward Weston, the black and white photographer.  In the end I realized that we were both lucky.
Posted by Sharon at 9:23 PM

It's so hard to raise our pets until they're teenagers and then say goodbye.

So sad about Eddie....you gave him a wonderful life.

Oh Sharon....my heart aches for you. But, it sounds like you were both very "lucky" in this life!!! Your booth is great...and I'm glad you did well.

I understand your grief I had to put Dylan down a couple of weeks ago. It is the responsible and kindest thing to do, but I miss him. Eddie was lucky indeed to have come into your life. I wish you good memories of both Eddie and Charlie.

Sorry to hear of your loss, and hope that the wonderful memories that you have of Eddie will give you some comfort in the coming weeks. Lucky dog, lucky lady!!!!

Oh how I long for that land where pain and suffering and loss and sadness will be no more! For now, I am shedding tears with you and hoping that all the animals we have ever loved, who often act more like guardian angels than animals, will be with us on the New Earth.

I'm so sorry for your loss. Tough year with Eddie and Charlie both gone. I remember some sweet posts you wrote about Eddie earlier...his intuitiveness, and kindness.

Also, congratulations on doing well at the local sale.

Busy times. Happy Thanksgiving to you and yours.

I left a comment on Ian's FB post about Eddie - He was lucky to have you take him in, and you were blessed by his presence. He was a good dog.

Oh Sharon, I'm so sorry for your loss. I was thinking about Eddie this weekend -- my dad gave me his old Edward Weston light meter.

Oh, I'm so sorry to read about your loss. Our four footed friends make our lives such a different place - if you believe in the Rainbow Bridge then he is up there playing with Charlie, and they are having a rollicking good time.

You were indeed lucky to have such a wonderful dog. Isn't it amazing when one has the luck and joy of spending a small part of our lives with such a special animal.

I think craft booths look much better when there is lots of product.

I am so sorry about Eddie. You've had it rough with losing pets this year.

Lexie looks so sweet in her pink scarf.