March Over and Out 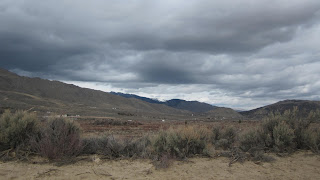 The sunny weather we enjoyed in San Francisco turned to cloudy the day we left and we got rained on driving over the Sierras.  That weather is now here.  I'm trying to walk two miles every morning and the dogs approve heartily. 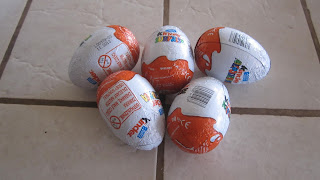 We found Kinder eggs in a corner store on Steiner.  I knew the kids would be thrilled so ended up buying eleven.  Josh managed to get rooms for both their families in our hotel and on the same floor.  I took the eggs to them before we started anything else.  They're so silly, you just have to laugh.  The toys in the center are often in pieces with assembly required.  Matt worked diligently and produced a boomerang that was so effective that we ended up hurling it around the hotel room.  The boys chased it, to no avail. 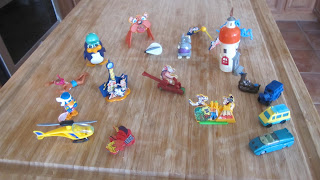 This is my collection that I've been adding to since we went to Germany in 1995.  They were illegal for years and just recently an American version has been released.  I think we actually got illegal eggs.  I wish I  bought more!  About half of them have moving parts.  I bought one for me too.  I'm waiting to open it until I deliver the last four.  They're more fun to open together.  These are the ultimate Easter egg in my opinion. 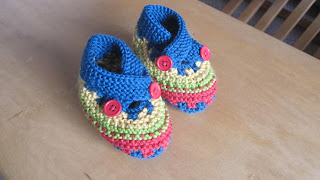 I was a passenger for only six hours so this is all the trip knitting I got done.  I'm still working on a baby sweater and need to step it up a notch, since we leave a week from tomorrow.  I love these and hope they fit a real baby.  They're supposed to be six-month size. 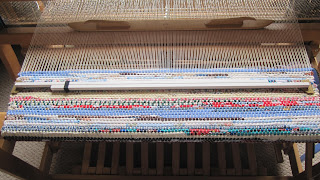 I'm back to working on the rag rug runner which is working up much better with a temple.  I'm happier with 6 ends per inch and 2" strips which I fold in half, right side out.  I think I'll try thinner strips one of these days, just so I'll know.

The Revised Fundamentals of Caregiving, by Jonathan Evison
The End of Your Life Book Club, by Will Schwalbe
A Country Year: Living the Questions, by Sue Hubbell
Prince of Fire by Daniel Silva
Good Grief by Lolly Winston

LOVE the kinder eggs....that's the first time I had seen them! Your rag rugs look great!

My kids always loved kinder eggs when they were small. You have a great sense of colour in your rugs. The runner is looking pretty and interesting. One of these days, I'll have to try a rug.

Where did you find that adorable booties pattern. I love it. I have never even heard of Kinder eggs. They look like great fun.

well you know I'm going to have to make those booties....not quite up to knitting yet.
and so glad you are happy with the temple......I love them, weave with them all the time, and toika makes the best.

I have never heard of Kinder eggs, but my mind is trying to wrap itself around the concept of illegal eggs with toys in them. Why were they illegal?

Those booties are sooo cute!!!