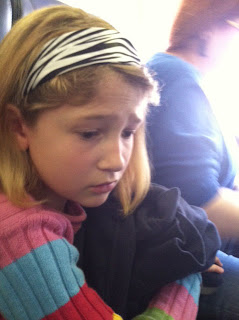 We got to the airport Saturday with plenty of time to spare.  Alexia felt very grown up and was excited about her first airplane ride.  She told everyone including the stewardess as soon as we stepped onto the plane.  But when it was time for takeoff, that changed and she was suddenly terrified.  After a outburst of shear panic, Christina pulled her head onto her lap and covered Lu with her sweatshirt.  Landings didn't scare her so much, but she experienced all four takeoffs with her head on her mommy's lap.

Just a quick note, if you're new to my blog, my daughter, granddaughter and I few to Massachusetts on the 5th.   Christina gave up a baby for adoption when she was in high school.   It was an open adoption and his parents established communication four years ago, feeling John would benefit from meeting his biological family.  He became a daddy March 1st and they invited us back to meet the baby, Olivia Grace.  Phew - that was a lot in a few words. 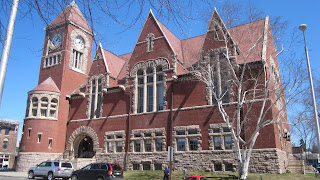 We were in awe of the historic buildings.   American architecture has been an interest of mine since high school and this is the very first Richardsonian Romanesque building that I've seen in real life.  It's the Amherst town hall.  And just so you don't sound like a foreigner if you go there, the "h" is silent in Amherst - Amerst is correct. 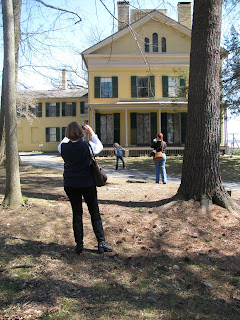 John's parents are Karen and Paul.  Much of our visit centered around Amherst since Paul is on the faculty there.  Karen took a day off from work to give us a tour of local sites.  This is Emily Dickinson's house.  Her father was on the faculty at Amherst as was Robert Frost.  Karen is full of fun and this picture is so typical of her humor, catching me taking a picture of Chris taking a picture of Alexia. 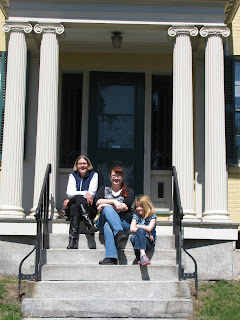 More Karen humor - she posed us on the front steps.  John, Shannon and Olivia were all recovering from colds.  Olivia was still experiencing a lot of congestion for the first few days so they stayed home. 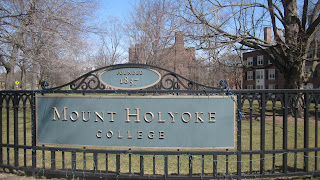 Paul rode his motorcycle to work so we could have his car for the day.  He suggested that we visit Mount Holyoke college.  He feels it's one of the most picturesque of the eastern colleges.  Chrissie and I were overwhelmed by the dates.  John C. Fremont didn't come to Nevada until 1843 - the first white man and explorer to see Lake Tahoe. 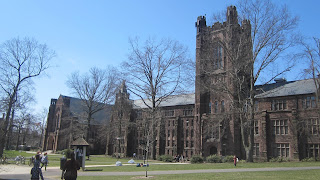 Amherst College is really a pretty campus but Paul is right.  This campus is a movie set gorgeous. 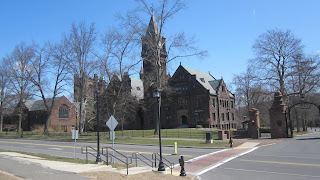 Paul explained the "five colleges" which are UMass Amherst, Smith, Mount Holyoke (both still girls schools), and Hampshire.  They've formed a consortia with buses running between the schools.  Admission covers all five colleges.  If you can schedule the classes, you can take them and design your own degree.

Paul gave us a tour of Amherst followed by lunch in the student dining commons.  The school actively pursues diversity and sitting at lunch with the students was stimulating and invigorating.  It was especially neat to see Paul in his own environment.  He introduced us to his support staff who had known our story all these years and were excited to finally meet us.  I think Paul and I are going to try to put our story into writing.  It's ambitious and scary. 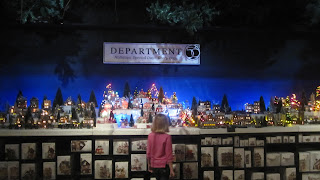 And no visit is complete without a trip to the flagship store of Yankee Candle, the second most visited tourist destination in Western Massachusetts.  I wonder what's first - hmmmm.  It's massive and cannot be done in under 90 minutes, which is all I could manage.  Christina figures that she and Lu spent close to five hours but in several trips.  The Christmas world, as you can see by Alexia's body language, is magical.  I didn't expect to get caught up, but I did and I bought candles.  In fact, I'm burning one right now. 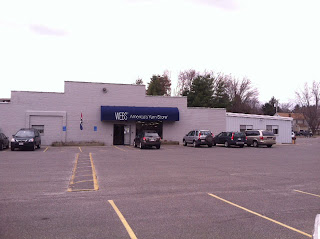 John and Shannon wanted to take us to Northampton.  They really like the town because it's bigger and the shops are interesting.  Plus, we were meeting Karen there after she got off work for dinner.  It was Wednesday, John's bowling night, so Chrissie and Alexia were excited to go to the alley and bowl a couple of games alongside of him.  I decided I'd come home with Karen after we ate.  I learned that I was in the home town of Webs, and ironically, I had an order in transit from Webs that I made before we left so it would be waiting for me when I got home.  We stopped at the visitors center for a map and in the conversation, the lady mentioned that she had popped down to Webs at lunch.  Just a couple more blocks on the same street. 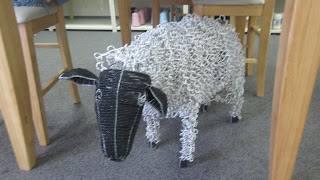 This is their store greeter. 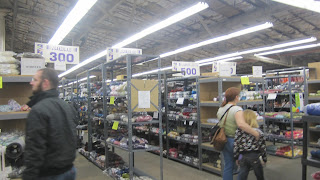 The store is massive.  This is the back warehouse area and it's where Cascade 220 superwash was on sale for $7.59 a skein.  It's my favorite yarn to knit for children. At that discount it was like buy three, get one free. 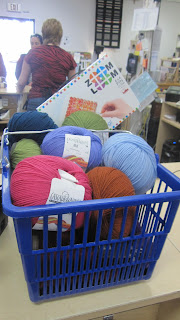 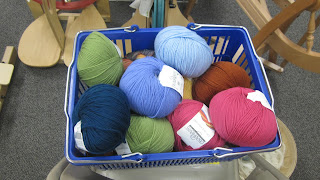 This is my loot.  I also bought the floor model of Schacht's version of the old "Weave It" sampler loom.  I've wanted one for a long time and was glad to finally get one.  They said that these little looms are backordered for the moment.  Lucky me! 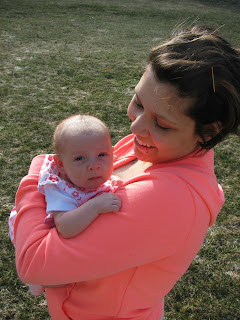 We were on the go the entire time we were there so it's hard for me to figure out what to share and what to leave out.  I'll leave you with a picture of Olivia with her mommy Shannon.

What a lovely visit! Glad we got to see the baby in the end. :)

And Webs to top it all off. You had the best trip.

wow, what a great trip on so many levels.

What an amazing trip for everyone, in all sorts of ways. Thank you for sharing!

such fun! the baby is beautiful:) her name is close to my heart because it is exactly what i picked out for my son if he had been a girl :)cant wait to see what you do with the zoom loom. i had an old weave it in the 70s and made everyone potholders :)(i was 7 or 8 years old)have a safe flight home:)

It sounds like you are really enjoying your trip. I love that you got to go to WEBS.

Wow! That brought on all sorts of nostalgia. My roots are in West Mass (Holyoke, Chicopee, South Hadley, etc.),but I have not been back since my mother's funeral some years ago.

I'm glad you had a good time, and, yes, write your story. Go for it!