Counting Down to the Weekend 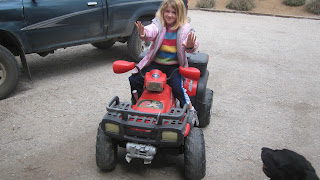 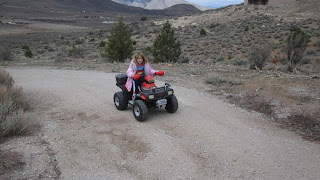 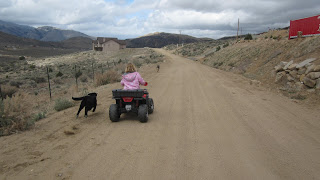 This is the battery operated ATV that Grandpa bought from a neighbor for $50.  Ian thought it would be fun for the kids at the Gathering.  Noah loved it when he visited in February and Alexia has been anxious to get a chance to ride it herself.  Even though it was sprinkling lightly, I told her if she'd be patient and let me make a batch of soap, I'd walk with her and the quad. 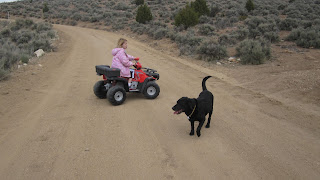 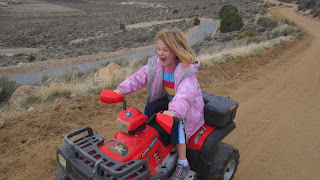 She loved it as you can see.  The quad is great on level surfaces and downhill, but uphill requires a boost, i.e, me pushing.  She calls it an ATD.  I guess that's just the way she hears it.  I can't criticize.  I always wondered who Addle was.  My mother said we were going to see Addle (Seattle). 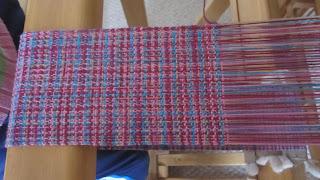 Lu wove for a while on Wednesday and then lost interest.  Then she realized that she wanted to wear the scarf on our trip so went back to work yesterday with renewed vigor.


I love watching her weave.  She has gained so much confidence and while she worries about her "weaver's angle," it pays off in her perfect selvedge. 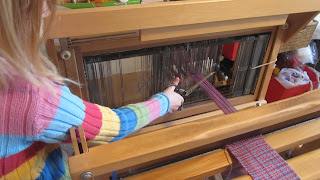 Off it comes.  It's always so final when you cut those warps. 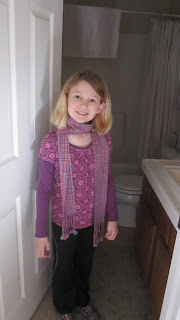 Tah dah - the finished scarf.  It's fantastic.  You can see if you click for big that there are selvedge errors on the left and I told her that's a good thing.  The right is perfect so no one would believe that she wove it otherwise.  She's already thinking about the next scarf.  She liked winding the bobbins but didn't like advancing the warp.  She's come a long way since last year, and she's only eight years old.

She's says my new Dorset is hers and Maudie Mae is half hers.  I said I thought we should call the Dorset Dora, after Dora the Explorer.  She said, I *hate* Dora.  I think it's a good name for discovery and exploration, I said.  She wants to call it Big McIntosh. 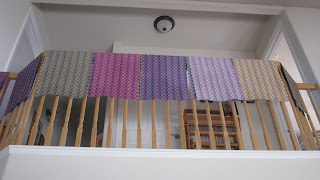 I worked alongside of her and was able to finish my projects too.  These are the dishtowels from the hyacinth colorway.  I'll list them on Etsy when we get back.  That's her loom, folded up in the background. 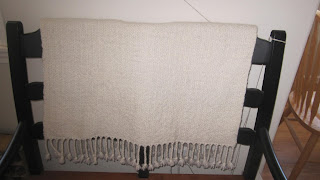 I was able to finish the lap robe that I was weaving on Lilith.  It will also go on Etsy when we get back.  There's nothing like it for sale so I'll just have to see how it goes.  It's handspun yarn from two of our wethers.  I wanted everything done by this afternoon so I could finish it on the mini-mangle.

My suitcase is packed and the dogs are nervous.  I'm happy that TSA now allows small scissors as Alexia and I plan to knit on the plane. Tomorrow is an amazing and wonderful day.

How lucky she is to have you for a Grandma, Sharon!

What fun that must have been: weaving side by side!!!

How absolutely precious! I love how she scoots back and forth along the bench. And that's a very nice scarf. She will make all her friends jealous and they will want to learn to weave, too. :)