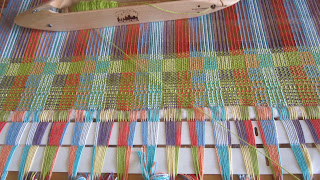 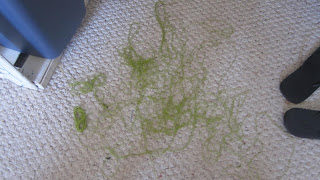 This is waste.
I haven't changed my tie-up in over a year but I recently changed to standard tie-up for one project.  I went to change to the Texsolv system yesterday and realized that I didn't remember what it is for the turned taquete draft.  I dug out the old newsletter from my file box and in my hurry to get started, I didn't stop to make sure I was using the right one.  There are two drafts in the newsletter and I used the wrong one. 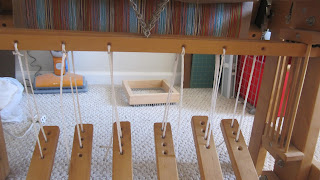 I realized today what needed to be done.  I wasn't happy about unweaving but I was thrilled with the ease of the new system.  The lady at Yarn Barn suggested that I leave a length dangling from each lam but I thought that was too messy.  Forget messy, I'm doing it.  Changing is just a matter of moving the peg from one cord to another - that's it.  Minutes! 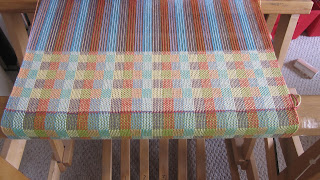 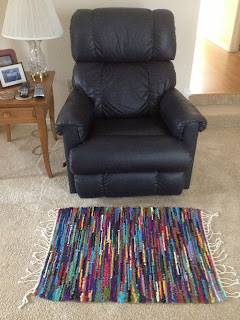 I posted a picture on Facebook of my looper rugs and a friend from the library book group asked to buy one.  She didn't even flinch when I quoted her $50 so I guess that's the price.  I took it to the meeting yesterday and she sent me this picture last night.  I called them bathmats but she wanted it to put under her husband's chair to preserve the carpet.  I never thought of that, but it's a great addition to their family room. 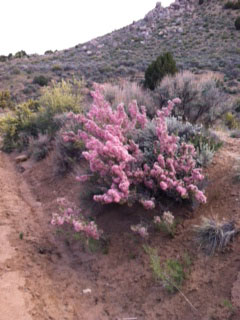 Desert Peach and Bitterbrush bloom at the same time.  Ian caught this pretty display on the side of our road with his cell phone. 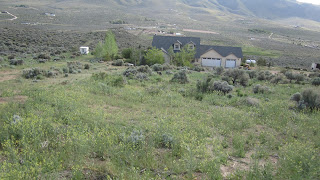 Last year we participated in a program funded by a grant through the Fire Safety Council.  They brought in two bobcats with "masticator" attachments and ground up about half of the brush on our property while spreading native grass seeds at the same time.  It was really dry and barren looking through the winter, but this is the greenest spring we have ever had. 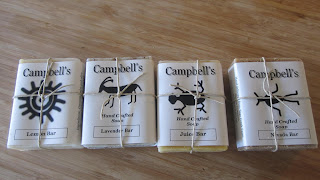 Cherlyn, the gallery manager from the Artists Coop, called me Monday and asked if I would think about making some soap labels that would contribute the Rock Art show in June.  I thought about it while walking the dogs and decided to draw them on my iPad.  But first I had to learn the program.  They are in order from left to right as I made them, getting steadily worse.  I used InspirePro which is a neat program but there are so many things to chose from:  graphite pencil, oil crayon, air brush or paint brush, and what width, what kind of brush, what recharge rate and more.  It took me four hours to make these - most of Monday afternoon.  I wanted to photocopy them yesterday when I was in town so Ian can take the labeled bars to the gallery tomorrow when he goes to the dentist.  I'll revisit the right image.  He's never prone in the petroglyphs. I was running out of steam - he looks like road kill.