Saying an Early TaTa to May 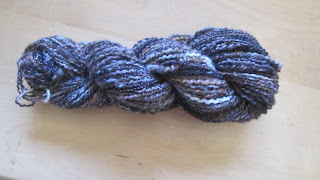 I'm still experimenting with making batts and spinning art yarn.  This is what I finished this morning.  One week from today I'm taking a class at the Conference of Northern California Handweavers with Lexi Boeger.  I figure this yarn is practice so I'll be a very good student next week.  The conference is at Squaw Creek in the Sierras, the same place as the 1960 winter Olympics.  Lucky me! 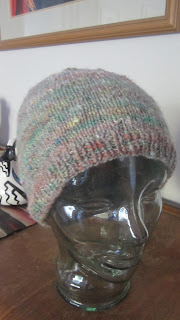 I've tried making some hats with the yarn but I think I need to beef up the colors.  I say that because this looks washed out on me, but I got to thinking that it might be nice with dark hair.  I'm still trying to figure out what I can make in abundance for the three day craft fair in October.  I realize that I'm just not as productive a weaver this year as I was last year so I'm starting to turn my attention toward my yarn since I spin for an hour every morning with my SAD light.  I had thought I'd weave scarves with my prodigious output, but perhaps hats and skeins of yarn with hat patterns might be a healthy addition to my booth. 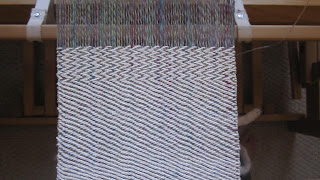 Thank you all for your comments and suggestions as I've foundered in the scarf sea.  I appreciate everything and every bit of advice - much of it stowed in a folder for future reference.  As a rag rug weaver, I cannot believe that I didn't realize how sett affects how the weft packs in.  I went to a 6 epi sett for rugs to make them as weft faced as possible.  Doh.  Thanks to an email from Cindie, I realized that my 10 epi warp sett would be more weft faced than 12 epi, and I also realized that I would never be happy with it.  So I unwove all 10 inches, resleyed and started over, still using straight twill which was still smothering the warp.  Then I decided to try a point twill and suddenly the warp showed up at the party. 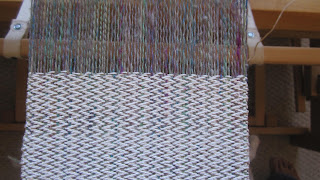 So I unwove it - again.  This is when I realized just how sturdy my handspun yarn is.  I'm using a cotton/rayon yarn from Henry's Attic for weft.  Laura called this morning, just to say hi from Oregon.  In our conversation I told her how the undyed weft was stealing my warp's thunder and how I thought I'd have to put it in a dyebath after it's off the loom.  She said no, that the cotton/rayon wouldn't take acid dye.  I said I had fiber reactive dye and she said no - that is death to wool, too alkaline.  I'd have to use Ritt.  It was after that conversation that I unwove and changed my treading to this.  I think it might work - hope so.  I hate being a beginner. 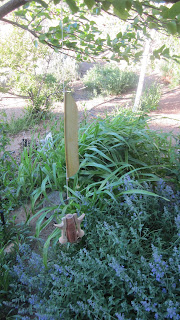 This is our new wind chime.  Kerry and I kept hearing an interesting clacking while we ate lunch in the courtyard at Sopa last Tuesday.  We asked the waitress what it was and she explained that they were something the owners brought back from Thailand.  The owner told us that they brought them back in their luggage and had four left, so we both bought one.  The wind catches that palm frond strip, which giggles the chime below.  Two arms dangle on the outside and clack again the center piece which the owner explained was mango wood.

I'm excited because we have company coming tomorrow - our friend Petey is going to visit us for a few days.  When he leaves, I also leave for the conference so I suspect this is the last time I'll have a chance to blog in May.  Ian and I  really enjoy documentaries but somehow don't seem to make time to watch them.  We've decided that each Saturday night we'll watch one from Netflix.  We call it DocSat.  I've included our viewings in my summary.

Books:
The Hundred-Year-Old Man Who Crept Out a Window and Disappeared, by Jonas Jonasson (it's Liz Salander meets Forest Gump)
Eventide, by Kent Haruf
The Supremes at Earl's All-You-Can-Eat, by Edward Kelsey Moore
The Madonnas of Leningrad, by Debra Dean
The Reluctant Fundamentalist, by Moshin Hamid
A Tale for the Time Being, by Ruth Ozeki

Yes, getting over that learning curve can be frustrated but you learn so much from it - I've always learned much more from my mistakes. You'll get the scarf weaving......

Have a great time at conference - can't wait to hear all about it here.

As a knitter - I know I would be interested in handspun yarn kitted up with a pettern!!!

Every batt you make and spin up, every scarf you weave, and every hat you make just makes you better at what you do. I love that skein in the first picture - very bright and interesting.