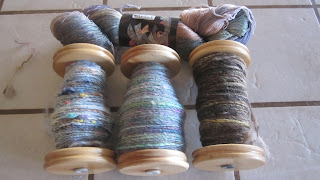 I took my three bobbins of singles to the guild meeting on Wednesday night.  This was the last meeting of the year and it was also show-and-share.  I'm the newest weaver in the group so didn't pull these out until after the meeting.  I want to weave scarves from my handspun yarns but I need to know so much more.  I placed an order with Yarn Barn last week and was disappointed that they don't have 60s/2 silk which is what I had wanted to order for binder for my singles.  Guess what?!  The trunk sale at the meeting was for hand dyed 60s/2 silk from Just Our Yarn.  I bought the skein on top at a dear price. 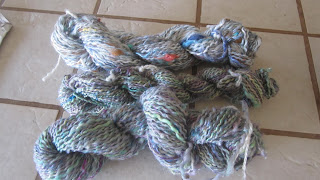 I just dove in.  I taught myself to spin from Karen Raven's book and apparently she is left handed because I spin left handed.  That means all the articles I read and videos I watch are backwards, but somehow about halfway through the last skein, my hands caught on to the concept.  I have a long way to go but I'm not nearly as frustrated about my spinning as I was.  Now if I can only figure out how to translate this yarn to weaving.  Warp?  Weft?  I suppose I'll have to do it and find out for myself 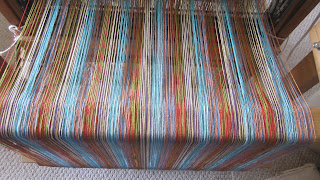 I have the Fiesta warp on Maudie Mae and it's interesting how the colors influence each other.  You need to click to see the red.  I'm stuck at this point until next week.  One of the things I ordered from Yarn Barn last week was Texsolv tie-up.  I am not doing the Gilmore tie-up one more time.  It's just too gymnastic and requires flexibility I no longer have.  My order arrived but without the pegs that will make this happen.  They weren't on the order invoice.  I called in a panic.  They're shipping but not charging shipping.  I love those guys. 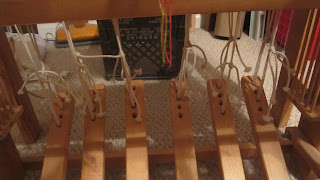 This is what Gilmore tie-up looks like.  Mr. Gilmore invented the jack loom in the 1940s and this system dates back to then.  It's archaic.  You have a piece of clothesline dangling from the lam tied in  a single knot and then a piece of clothesline coming up from the treadle, which you tie in an overhand knot and slip over the knot from the top.  Are yours eyes glazing over yet?  And then each has to be adjusted until all the harness are lifted to a uniform height.  We are not amused.  I'm crippled by the time I'm done, and that's why I'm done with this system and I should have ordered the Texsolv at least a year ago. 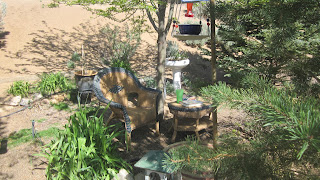 Ian and I have been talking about where to put our battered wicker furniture.  It's second hand from a neighbor who moved away.  I realized today that one of our trees is big enough to give shade so took out one of the chairs and the table from the garage as a test drive.  This is the nicest afternoon we've had this year. 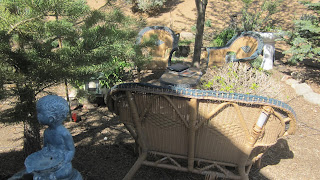 I read for a while and then had Ian help me bring out the rest of the set.  I can't explain it, but it's not the same as reading on the porch.  My book and I were in another place.  We only have one more day before the weather gets back to normal but I look forward to a summer of afternoons here. 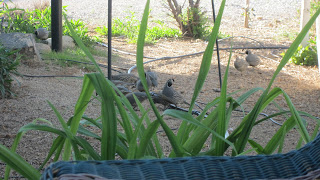 This the time of day that the birds come to feed and they fussed and scolded me, trying to get me to leave.  I saw them run a rabbit off earlier today.  The California quail were more forgiving. 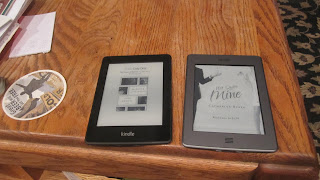 Two Kindle Touches, that's what you see here.  Since Massachusetts and seeing Paul's Paperwhite Kindle, I've been lustful.  It means reading in bed without a heavy book light.  I was sitting on the front porch yesterday morning when Ian came back from the mailboxes with two packages.  One was our onions, the other the Paperwhite he bought me.  He gets the hand-me-down Touch.  He says likes his original hand-me-down and has given my "cast off" to one of the kids.

Reading is so rich.  Books and information are in in a state of flux and we're just on the crest of this wave.  My job in resource sharing involved the physical shipping of articles and books and that was just five years ago.  It's an exciting time but a lot depends on licensing agreements.  As for virtual delivery, we need to keep our eyes open - pun intended.  Meanwhile, I have a stack of physical books on my nightstand as well as the four I've checked out from the library.

How cool that the JOY yarn matched what you've been spinning!

The warp looks like a lot of fun. I know exactly what you mean about the tie-ups. I changed the tie-ups to texsolv on my LeClerc Compact when I did the baby blanket a couple months ago.

RE: e-books...in general I like them. But, like audio books, some work better for me in that format than others.

The other aspect that I mourn with electronic media is the future drying up of the secondary market for books and music. What will happen with used book stores and the flea markets where you can browse through music in different formats? It'll be interesting to see what emerges.

I was devastated last year? when I broke my Kindle....took a couple of weeks until I decided what I wanted to replace it with (basically the same one! LOL) And then later in the year that Paperwhite came out - darn!!!! Timing is always off.....let us know how you like the paperwhite....maybe I can ask for one for Christmas and hand down the one I have now (oh wait a minute,I wanted a new lens for my camera for Christmas.....hmmmm)

i switched my ancient gilmore to the texsolv tie up system last year. what a difference! you will love it.

I love the wicker outside - it is a separate place! I have a little spot behind my house in the shade of a couple of junipers that's kind of like that. I'm looking forward to being able to hang there this summer!

I think I would use the handspun as weft. I would think that it would get lots of wear from the beater if used in the warp. But I do love the colors in it.

I, too, enjoy reading. With as busy as things have been lately, I've been getting in about 15 minutes before I go to sleep and that isn't nearly enough.

The weather here is being really erratic. One day it's in the 50's and rainy, then in the 80's. The rest of this week is supposed to be thunderstorms.