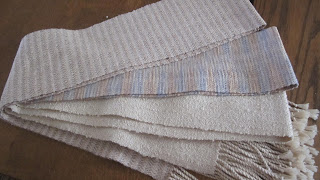 I finished the three scarves on my warp and as I suspected, they're much too firm.  I honestly felt like I was beating lightly.  There is a recent group on Facebook called 4-Shaft Weaving so I posted my frustrations there along with a picture.  I got a lot of helpful comments, but the one that struck a chord was from a woman who said her weaving instructor cautioned - don't squash the bug.  I need to try it again and save the bug. 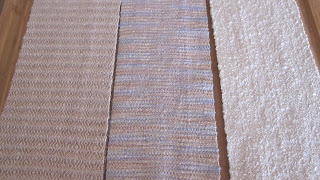 I thought these looked really cool while I was weaving them but they really aren't all that interesting.  I'm going to make small purses out of them, add some beads and long kumihimo straps
so it's not a total loss, but I obviously have a long way to go before I get then hang of scarves. 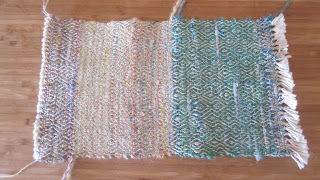 I had a little warp left at the end so I sampled with some of my handspun yarns and I have to tell you that I'm not excited about the results.  I especially didn't like the thick and thin yarns in the weft - again, not that interesting for the work invested.  It's been a day of self corrections.

I woke up this morning with the realization that I have three months before the three-day McQueen Craft Fair in October and I am nowhere near ready to fill a booth.  I laid in bed for while, mulling over my options.  I finally got up and emailed the program contact, opting out.  I'll get a 50% refund for $83 and the other half will in essence be a donation to the high school band program and I'm good with that.  I had no idea what a huge relief that would be.  I celebrated by reading on front porch all afternoon and it was a perfect day for it. 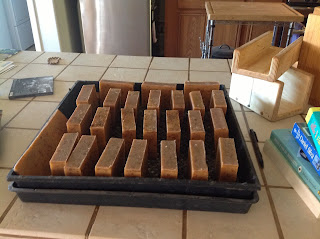 Meanwhile, I made soap on Monday and cut them into bars today.  I'll cut these in half to hand-soap size before they finish curing.  They've been commissioned as wedding favors for an August wedding.  Kelly, bride-to-be, has purchased seed-impregnated paper for the labels.  When her guests plant the labels, they'll have a living memory of the wedding.  Is that not the best idea or what?! 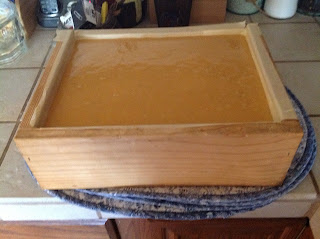 I decided to be safe that I'd make a second batch today.  I'm very excited about this as Kelly is my running partner's daughter.  I met Pam b.k. - before Kelly.  Pam got divorced, we moved and life moved on and even though neither of us run anymore I've only had one running partner.

Ian and I are invited to the wedding barbeque.  We're going to pass on the wedding.  It's being conducted on a peak in Yosemite. I'm excited.

Luckily you are creative enough to get use out of your woven fabric, even if that use is not the original one.

That soap in the second picture looks like pumpkin pie filling - Yummy!

Those are great ideas for the wedding favors - once they plant the labels, they can clean up. ;)

I wish I lived close enough to help you with the scarves....to sit there, analyze the yarns, setts they should be, etc. You'll get it - in the meantime you have some great fabric for your purse projects. I can remember the first scarf I ever wove back in 1986 - it could have stood straight up by itself and the wool was itchy as all get out.....Sam never wore it and I can't blame him.

Hallo,do not try to weave so tight.
make double distance betwenn the Yarn, it will shrunk,wenn you have washed it..best wishes Wiebke

Do a wrap test, and whatever it is, halve it for your sett. Especially with handspun. I have a feeling that had the warp been spaced more widely, your handspun would have looked fine.

You've had plenty of advice on scarves...so I'll just comment on your craft fair decision. Smart thinking....it's so important to know when to say no. Sounds like you are happy with that decision.

The soap looks yummy....love the idea of them being bridal favors. And seed paper idea: brilliant!