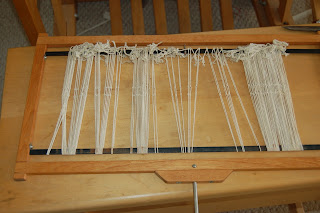 I decided last weekend that I needed to stop wondering if the Texsolv heddles I bought would fit my little Dorset workshop loom and find out - time to finish the job.  These are the string heddles that came on the loom and they don't slide worth a darn.  Melissa had put on the replacement tie-ups for the treadles when she was here and so I was finally able to pull out one harness at a time. 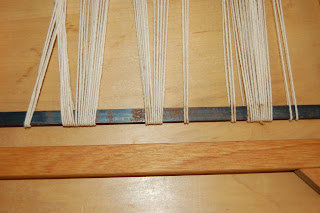 Not only were the string heddles icky, the heddle bars were too.  The loom had lived on the California coast and between the rust and nasty heddles, the loom was unusable. 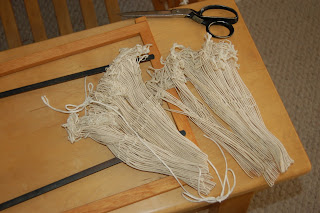 I called Yarn Barn of Kansas again asked to speak to a weaver.  She talked me down off the ledge.  I had mailed them one of the heddles and they used it to measure against the Texsolv heddle options and determined that the Ashford table loom, or the green, would work for me.  Texsolv heddles are sold in a bundle of one hundred and are bound by colored twist ties to denote their size.  The bundles were tight and wouldn't fit.  The weaver told me how to tease out a couple from the bundle without undoing the whole bunch, because once I pulled off the string heddles, if the new ones didn't work?  Picture me hyperventilating. 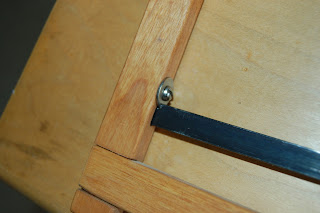 I think the manufacturers of the loom never dreamed someone would want to change a thing.  The heddle bars are screwed in tight.  I had to unscrew them so I could scrub them with steel wool to remove the rust. 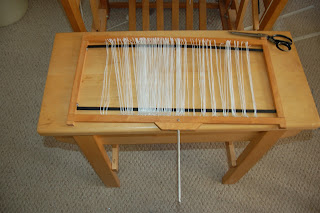 And then the Texsolv heddles went on easy peasy. 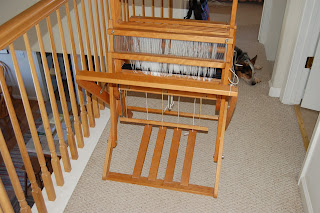 It really is a sweet little loom, though it's going to be a while before I get to take her for a spin.  I accepted a two-week library sub job at a local high school which won't end until next Wednesday.  I'm subbing for a  library assistant in a very busy library and enjoying the heck out it.  I love the challenge, the energy of the kids, and I'm also thankful that it's temporary and I get my own life back soon.  I was surprised to learn that I was the only person to accept this job.  The others declined because they were uncomfortable with high school kids.  I think this means that I might get to do it again.  Cool beans. 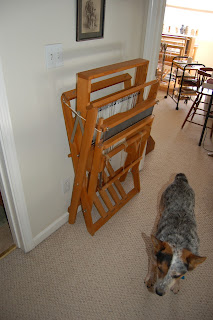 Good thing you have a guard dog for it!

You will so love this loom. You might even want to sell one or two of the others - it's that good. I'll have to look at getting texsolv for mine - it has steel heddles, and they work fine, but they're kind of noisy...

I would prefer hs students to anything younger - they're actually human by that point. Ok, helpless victims of their hormones, but still more humanoid than Elementary school kids (picture me running screaming...)