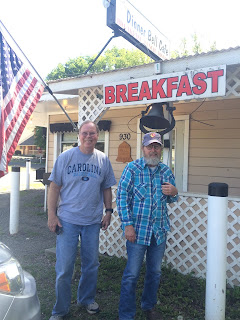 Our friend Petey drove up from SoCal and joined us on our June jaunt to see our kids in Bend.  We stopped in Lakeview, Oregon for our traditional breakfast at the Dinner Bell but the old guy who ran the place is gone, as is his delicious food.  There aren't many places to eat on this route but we're going to look for an alternative next time. 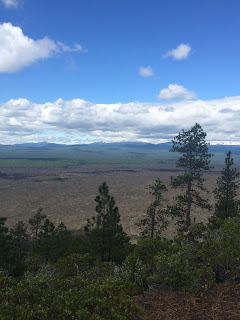 It was the last week of school so we were on our own during the day and wanted to share some of our favorite haunts with Petey, like Lava Butte National Monument.  You're looking at an old lava flow that still dominates that part of the landscape. 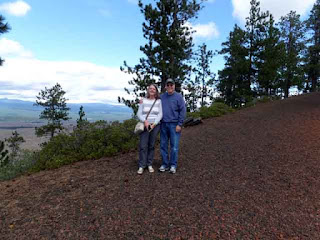 He took this picture of us as we walked the perimeter of the cinder cone. 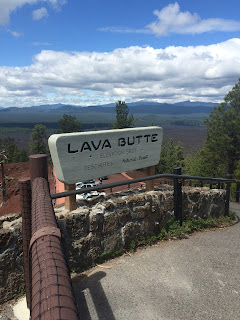 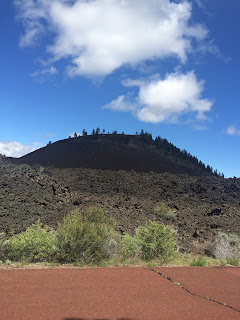 And this is Lava Butte.  You can see basalt from the lava flow in the foreground.  I was surprised this time by a strong sulfur odor.  I heard a couple of college students comment on it too. 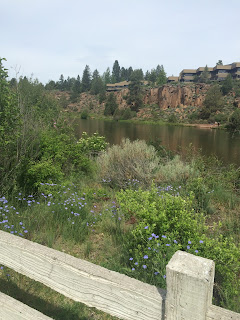 Petey is a devoted hiker and DIL Missy is a routine runner so she was happy to take us on a three-mile walk along the Deschutes River Saturday morning.  This is the quiet stretch of the river. 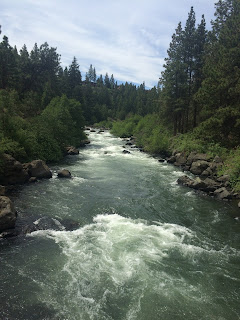 It gets a little more interesting at the top of this loop where we cross the river. 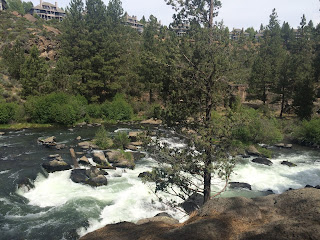 It's a busy hiking trail, for good reason. 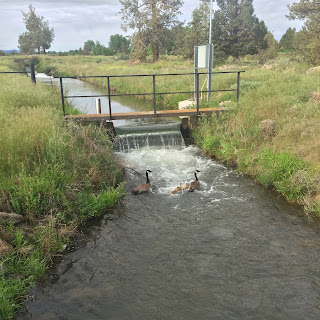 Petey likes to walk three miles each morning so I gamely signed on for walks from the house.  This particular morning we saw a goose family cross the road from some ponds and slip into this irrigation canal, but the turbulence below this gate was too much for the goslings.  Mom and dad immediately scrambled up the bank but it was really tense for me, watching the babies try repeatedly and slide back down.  I was really anxious but Petey is a biologist and said afterwards that he knew they'd make it okay.  And they did, but it got my heart rate up.  I guess I was thinking of the childrens book, Make Way for Ducklings.

I took all my photos with my iPhone this trip and it has taken me hours to figure out how to move them to my computer hard drive.  I'm learning how much Microsoft and Apple hate each other and I'm still struggling with the new computer and operating system.  Yesterday I naively downloaded iCloud for Windows since I'm paying for that storage for photos, thinking the two would play well with each other.  It moved my photos into a folder but I couldn't open them from there into Blogger.  I have learned more than I ever wanted to know in the past couple of days about computers.  They say that learning keeps the brain young so I hope this counts for something.

I really thought I had it under control and then last night when I finished writing my monthly blog post for the book club I facilitate, I discovered otherwise.  It's a library program that meets the second Tuesday of the month called - the Tuesday Book Club :)  I went to email the link to the 30 members on my list, but I discovered my address book was blank.  I started working on the post at 7:15 and it was 9:15 when I finally cobbled together a work around and stumbled off to bed only to discover why they tell you not to look at blue-light devices before going to bed.  It was midnight before I fell asleep.

So I fought some more with computer this morning, trying to figure out how to move my photos from my phone onto my hard drive and was almost late to my guild board meeting.  I won't bore you with the hour drive in drenching rain (Nevada?!!) and maniacal demented road work, but I will tell you that the combined outgoing and incoming boards came up with a spectacular year for 2015/2016 and I'm really excited about it.  It took us 4 1/2 hours but I think it was worth it.  And while I was driving the hour home I figured out the solution to my photos.  You just saw some of them - more to come.

All these computer troubles MUST be keeping your brain nimble and you young; you and your sweetie look great!