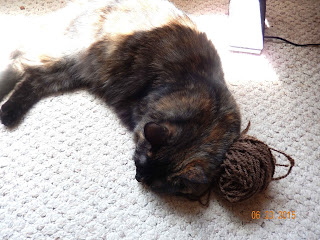 I decided that in preparation for packing my studio, I needed to finish the projects on both my looms and was Maddie ever thrilled.  She was full of beans, talking her head off, and stole this ball of yarn to torture.  I took it away from here, then gave it back when I realized that I was just going to throw it away anyway.  But that's no fun so she went to sleep instead. 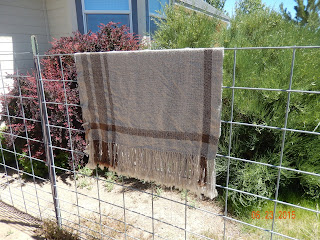 I finished the lap robe for Ian to replace the one I gave away for a raffle prize.  He wanted it a little wider so I wove it at 36" which was really uncomfortable for my neck.  I won't weave that wide again which makes me wonder if I should sell that loom at some point and look for a smaller eight-shaft loom.  I'm sure a smaller loom would be lighter to treadle. 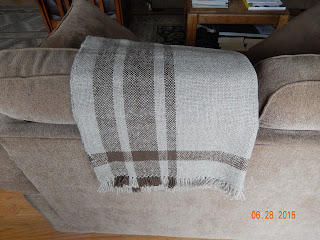 It's really pretty and just what Ian wanted for his naps.  This is from the last fleece I had processed from Ollie.  I have one bag of a little darker fleece and that's it and that's all there's going to be because I went through my fleeces and decided to throw them all away.  I have no time to skirt and I truly don't need any more processed wool.

I went through the 14 bins of processed wool and whittled it down to seven.  I'm taking a lot of it to Mim's for the guild meeting in July.  I cannot believe how much I paid to have fleeces processed over the years, though I am keeping everything from our sheep. 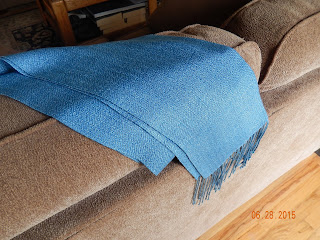 I also finished the Tencel scarf that I dyed in the yarn with indigo. 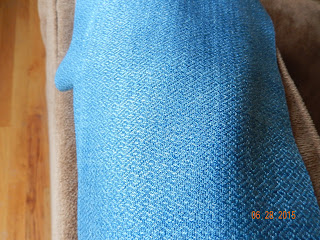 This is the Walls of Troy draft again.  I think I'll do it one more time in white after we're moved and then give this draft a rest.  I haven't decided yet if I'll participate in the farmers markets out here in our valley this summer.  Our escrow is supposed to close on or before August 21st and at this pace, my participation seems doable.  If the close date is accelerated, I suspect my priorities will be elsewhere. 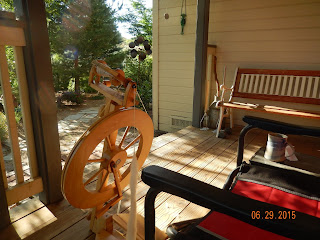 I haven't actually started packing the studio yet but my weaving is now on hiatus.  I've turned to spinning on the front porch in the mornings with my coffee for my fiber fix - before the day heats up.  We're in the middle of a stretch of mid-90 degree days that are unusually humid, sometimes with afternoon lightening activity. 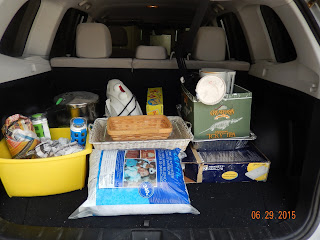 Every trip to town includes a trip to the thrift store and I have to go in tomorrow.  The back seat is piled with books for the library. 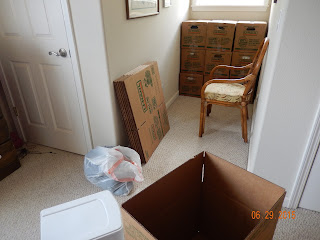 And there is always packing.  I packed up two more 3 cubic foot boxes with pottery today and then turned my attention to books.  The moving company requires no larger than 1.5 cubic foot boxes for books because of weight.  I took a pleasant break in the middle to look at photo albums and now they're boxed.  I've decided to measure my packing by time instead of my amount.  It's much easier on me.  I just poke along.  I ran out of tape but it was time to stop anyway.  It's been two weeks and two days since we accepted the offer on our house and we have a long way to go.
Posted by Sharon at 3:13 PM

Laura said you had a 2nd, full-price offer without contingencies. Are you staying with the contingency offer?

Alas Michelle, that offer was verbal only. It never showed up in writing so we wait until the close of escrow August 21st.