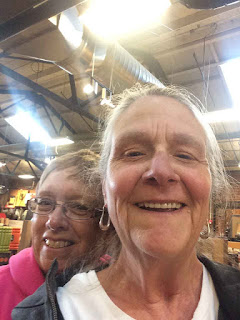 My friend Chris Smith from El Cajon, way back in the day, stopped by on her way driving from Portland to South Dakota.  She is our first guest of 2016 and the first one to use our RV space.  I gave her a cooks tour as she hadn't been in Bend in years.  She had never seen the Old Mill District which is on both sides of the river and is the area of two former lumber mills.  (Everyplace in the city is a district - our house is in the Old Farm District.)  I took this selfie in the REI store which is a building from the sawmill and lumber days. I didn't think about how short she is when I took it! 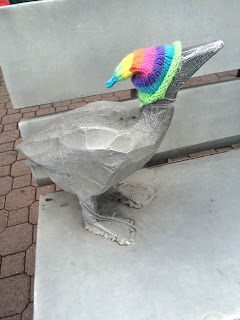 We did a quick tour of the downtown area. This little statue is sporting one of the yarn bombs from the fiber arts symposium a couple weeks ago. 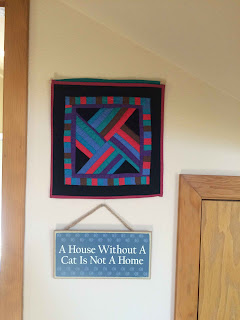 Chris drives a 24' foot RV which has also been her home for the past ten years, so it was a quick visit as she wanted to get on the road early.  She left me with this Amish-inspired wall hanging.  She's had to downsize her love of quilting and this is a perfect addition to my studio. 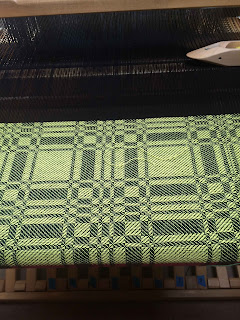 I'm sampling again on the two-block profile draft but with a black warp this time.  I was so full of myself, thinking that I had come up with something ingenious, a faux counterpane.  We watched Madelyn's DVDs at the weave/study group this past Wednesday.  It was there I learned that this had been a weave-along in a Handwoven issue a couple years ago but since I only starting taking the magazine last summer, I was oblivious.  I guess I'm not the only one who thought it was a good idea :) 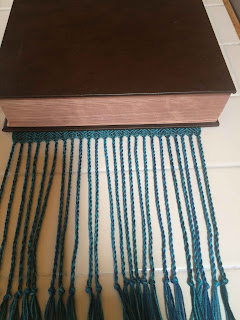 An exciting and energetic discussion followed afterwards.  I asked a by-the-way question - how do you get fringe knots to be the same length all the way across?  Stephani said to tie a loose overhand knot and then afterwards adjust the knots up or down.  It cut down the twisting time by half and the knots did line up.  I realized after it had been washed and dried that I hadn't snugged up the knots evenly and they no longer line up.  I will try this again on my next scarf. 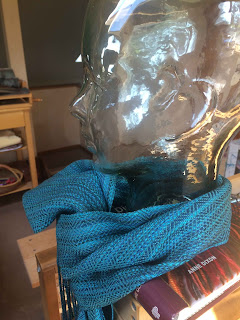 The scarf is finished but the matching teal Tencel M & W pattern is lost in the stripes.  I thought this yarn would be a little more variegated. 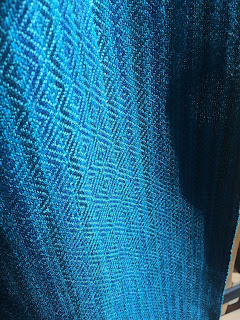 The light has to hit it just right for the pattern to show.  I think the 6/2 bamboo is a little heavy for a scarf and is probably more appropriate for a knitted lace shawl. 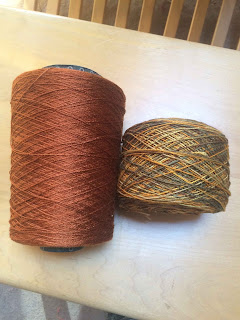 This is the other skein of 6/2 bamboo.  There's a little more contrast here so I'm hoping for better pattern definition this time.

Just a year ago we were here in Bend, enjoying a visit with the kids, and a year later it's where we live.  I had my first appointment at radiation oncology this past Tuesday.  The preliminary stuff is over and I start treatment next Thursday afternoon.  Fortunately we're meeting friends from tai chi for lunch that day, a little dose of laughter with friends to sweeten up the day.
Posted by Sharon at 1:48 PM

How wonderful that your friend could stop by for a visit! Touring the town gives you a chance to see it with fresh eyes! I saw an interesting quote about weaving earlier this week....it boiled down to it has all been done before, but we sure do enjoy the re-discovery! I'm glad you're enjoying playing with the blocks.