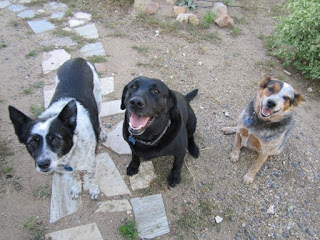 I love this photo of our three dogs in their hay hay: Eddie, Sammy and Buster.  Of course Eddie would have been perfectly happy to be an only dog but 'twas not to be.  They were all rescues. 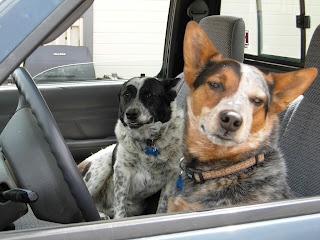 Buster was full of himself and loved to stir things up, then keep them that way. 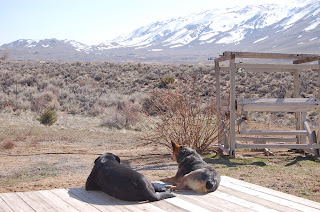 Herding and a hunting dogs don't normally have an affinity for each other, but Sammy and Buster formed an unlikely and unbreakable alliance.  Buster was the comedian and Sammy the straight man.  That is, Buster was always finding something to chase or bark at and Sammy would jump in the act.  Buster has lived with a soft-tissue sarcoma on his right front leg for the past 18 months and this past Saturday it was time for us to say goodbye.  It was a sad day but one we knew was coming.  Needless to say, Sammy is bereft.  Initially she roamed the house at night looking for him but now she just mopes. 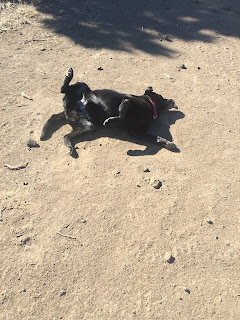 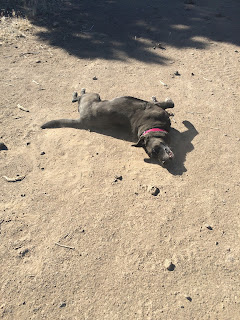 We're trying to shower her with lots of attention and not leave her alone for very long this week.  This morning I thought a walk into the field behind our house would do us both good.  She made it an opportunity for a dust bath. 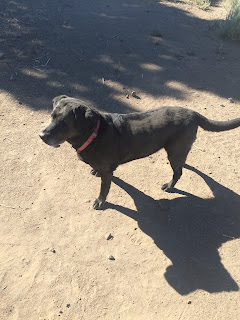 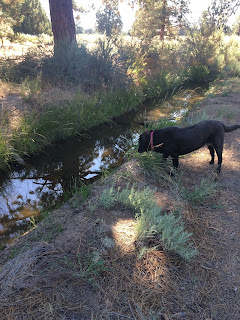 I ended the short walk by taking the path along the irrigation canal.  She always looks at the water longingly but hasn't tackled the rather steep banks. 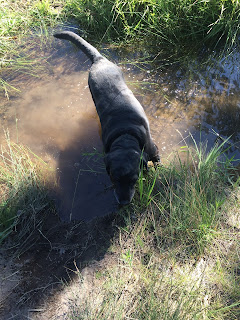 Until today when she found the spot that boys have created by riding their bikes across the canal. 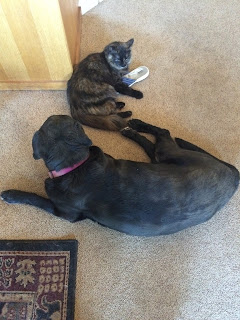 And today is the first time that that Sammy and Maddie have approached a detente.  One can only hope but after all, they're all they have, a dog and a cat.  There is no option C.

Loneliness makes people do strange things...and dogs are people, too! ;-)

Very sad about Buster, that's the heartbreak we sign up for when we take these loving creatures into our homes. They give us so much it's worth the sad times too.

Love seeing Sammy roll around in the dirt, and then take a bath in the canal. He made the most of his walk!

So sorry to hear about Buster. It isn't easy saying good-bye to our four legged children. But, it does look like he has accepted a new friend into his pack.

I think you'll find that Maddie and Sammy will become more bonded with each other, as they are the only ones. When Beaker died (got snatched by something), Petri adopted both dogs (not just Aengus), which took Lyra a bit of time to adjust to. But they are good friends, and check in with each other frequently.

No matter how long we have them, it is never enough. Big hugs to everyone and extra special thoughts for Sammy. She'll morn in her own canine way and adjust to the company she has. Here's hoping they become fast friends!

Hugs... It is sad to see a furry friend grieving. I hope it sorts itself quickly. When we had both a dog and a cat, they became friends only when I went a way for a few days. When I got back home, they went back to ignoring each other.

Sorry about Buster. Sad when our pets don't understand where their buddies have gone. We have lost two dogs and one cat to old age in the last several years and now only have Sadie a very loved and spoiled cat. Sadie did not understand for a long time why she was the only one left and moped until she realized she got all of the attention now. Decided not to adopt again till after we move if that ever happens.
Hope the remaining two become friends!