Something Colorful This Way Comes 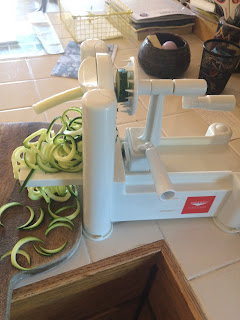 I saw a "spiralizer" on Hilary's Crazy as a Loom blog so I bought this. 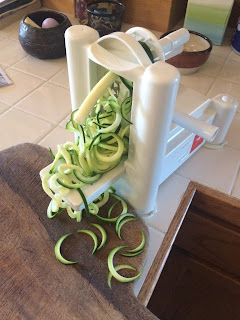 And it does this - cuts vegetables into long thin spirals which cook up wonderfully, though I did break the spirals apart to facilitate cooking.  It's really just a fancy mandolin but I don't have to worry about my fingers 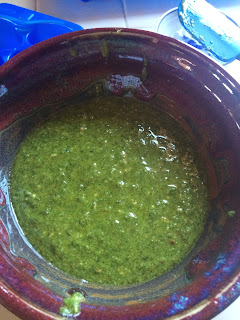 I also bought basil at the farmers market. 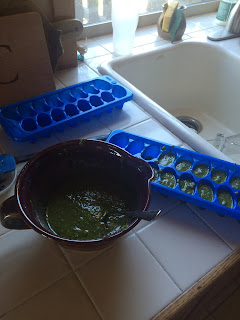 And it became this - pesto!  Ian doesn't really care for it so I freeze it in tablespoon cubes, then pull out a couple when I need it.  I love to do a vegetable saute for lunch and sauce it with pesto.  It's one of the best parts of summer.  I could smell the basil before I even got to the booth! 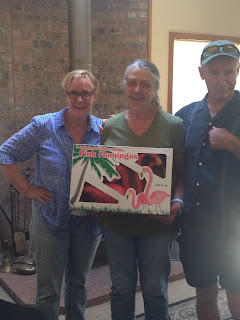 Our friends and former neighbors, Carol and Harry, are vacationing in Sun River and personally delivered one box of pink flamingos, a white elephant present she received at Christmas.  She's glad to have them out of her garage. 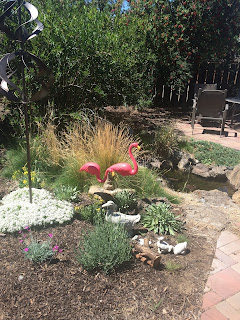 And I'm glad to have them here. 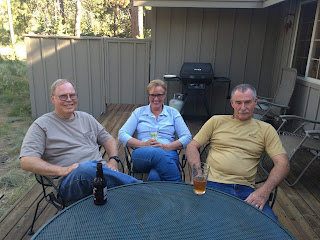 They invited us down to their vacation rental for dinner the next evening.  Carol is a librarian and we try so hard not to torture Harry with library talk and usually fail.  Also not appearing in this picture are Tamara and her friend from nursing Karen.  Table talk was animated and we laughed a lot - good medicine. 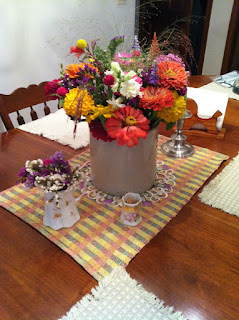 The last several months have been stressful, probably more than I realized, so when Jenny Bellairs sent me this picture of a towel/placement that she bought from me several years ago, I was deeply moved.  There's a part of me that lives and is appreciated in Michigan.  Can there be a higher complement?? 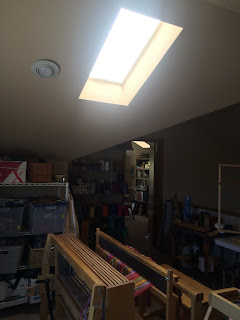 I had money set aside to do some updating in our bathroom but last month we decided to use it for skylight blinds which were delivered and installed this morning.  The different in temperature and light were immediately apparent.  We've had to run the air in the afternoons for the past several days but not today - that much!  I'm especially glad to have that direct sunlight removed from my looms. 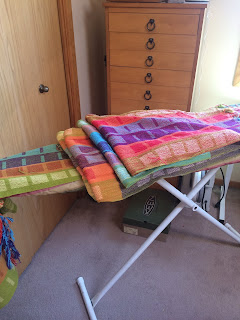 The towels are washed and in the hemming process. 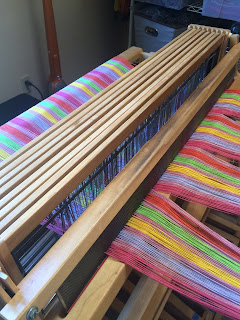 Without the glaring sun I was able to finish threading the Laffy Taffy warp, so baby blankets can't be too far behind. 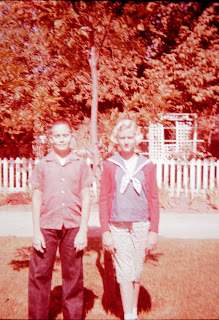 Every so often Stan (my oldest BFF) posts a picture on Facebook of us and it always crack me up.  I have no doubt that my mother sewed the clothes I'm wearing and probably knitted the sweater too.  Stan always teases me that I wore shorts and sweaters in the summer.  My parents took very few pictures and since I didn't remember that, I figured that was a fluke - but I can't argue with a photo.
Posted by Sharon at 5:50 PM

Lots going on in your neck of the woods! And to be sure lots of color. Glad you and Hillary are having fun with your veggie spiralizer!

How funny! After reading Hilary's post, I found a handheld spiral cutter....but I haven't used it yet. My basil needs to be harvested; it has done very well this summer. I'll have to come up with a dish with those fresh ingredients! LOVE the dishtowels...such happy colors.

Look at little blond you!