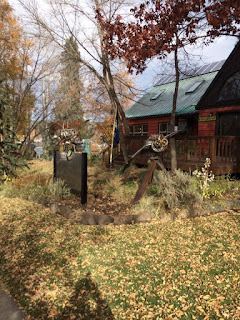 The Central Oregon Spinners and Weavers held our first annual Holiday Show and Sale this past Saturday in the Environmental Center in Downtown Bend.  The building is this lovely old house which by it's nature had limited interior space and light, but that didn't seem to be too serious a problem because between 10:00 and 4:00 about 250 people came through.  The vision and planning came from Linda Gettman, one very organized and energetic woman,  She divided the room up into individual spaces marked with tape so all we had to do was show up and install our stuff. 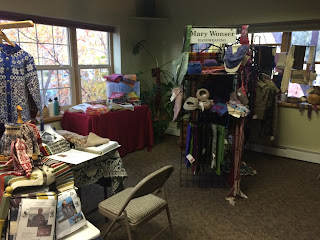 The corner is the 6'x9' area that I shared with Mary Wonser and Gillian Burton.  The entire show had a boutique feel to it, something several of the public commented on.  My little table is under the window but my booth-mates made space for my scarves on the center display and boy did I appreciate that.  Booth fee depended on the size of the space and our area split three ways was only $42 - cheap! 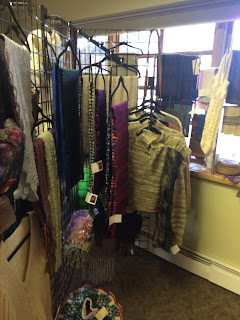 By placing Mary's shelving display unit at an angle Gillian had a small table in this wedge on one side and I had the wedge on the other, and Mary's stuff was on Mary's rack. 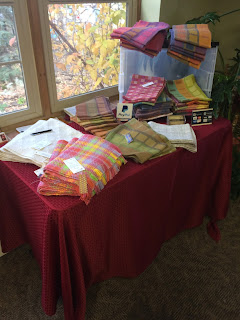 This was my domain.  It was a little difficult to get in out out of the area but I appreciated the bright window as the lighting in the interior of the room wasn't the greatest.  One woman was looking at my towels and commented to me that she had finished weaving this draft.  I said yes, that's my pattern.  She said, no - I got it out of a Handwoven issue. I laughed and said yes, it's my article!  It tickles me when this pattern appeals to other weavers because I love it still. 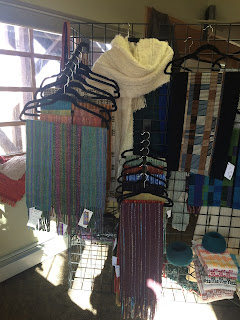 Mary rearranged her scarves and offered me the hangers on the left.  There was a ton of excitement and positive energy during the show and I was glad that my side of the shelving managed to attract some shoppers.  Actually I think the towels drew them in and then when they turned around they got a face full of scarves.

I was using a the PayPal Now scanner on my iPhone but after I had rung up four sales it froze my account saying that suspicious activity had been detected.  I get that I haven't used it since last March but since I'm putting money into the account, I don't understand their worry.  Mary covered for me and let me put $200 in sales on her Square.  I've since gotten that resolved and it was the only hitch in the event. 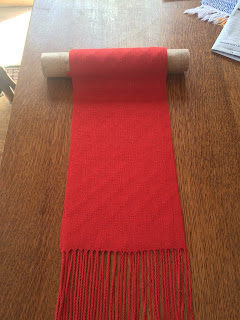 I took this to display with the rest of the scarves which I had modestly priced at $50.  When I got there I change my mind and added a 1 in front of it, making it $150.  I figured that way I could display it and still bring it home to wear this Christmas.  It sold early and was the transaction that froze my PayPal account.  Mary to the rescue!  Laura Fry chided me on Facebook saying that she starts her scarves at $100.  I've learned my lesson.  I will raise the prices on my scarves before I show them again. 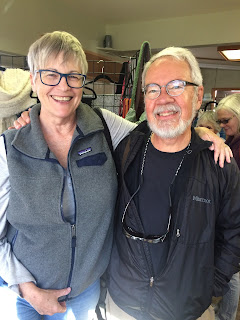 I had the surprise of my life when our two friends from Reno, Celia and John, popped into my space.  I had checked into the Environmental Center on Facebook which also provided the location and address.  They were driving from Seattle to Reno, saw the post and thought why not?  They stayed about 15 minutes, long enough for a quick visit and a towel, and then got back on the road.  Our first guild Christmas sale was a hit.  Now we need to do it again next year.
Posted by Sharon at 4:22 PM