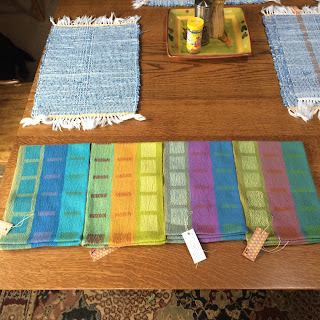 I had a pleasant surprise last week.  I got three separate email requests for towels and sold ten more in one week.  My inventory is seriously low right now. 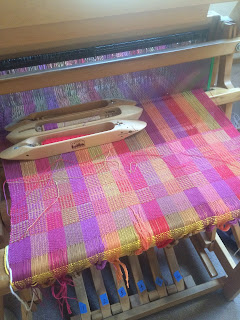 But instead of being productive, I'm trying to learn how to weave Crackle.  I took that two-day class from Susan Wilson last February and haven't done a thing with it.  I was stumped a couple of months ago when I tried to figure out how to do it using my notes and samples.  I'm quite foggy on the steps. When Sarah Jackson had a pattern in Handwoven recently I decided to weave-as-written to refresh myself, homework if you will.  When I that to Sarah, she said - Oh, I hope they're more fun than that! It's coming back to me finally but this towel is mine.  There are plenty of mistakes already and I'm just not going to fret over them.  I'll reserve judgement about Crackle until after I've completed the fourth towel. 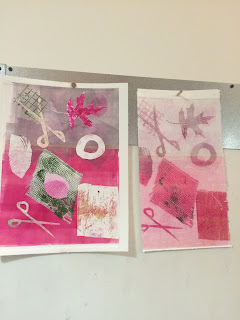 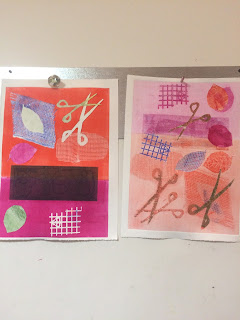 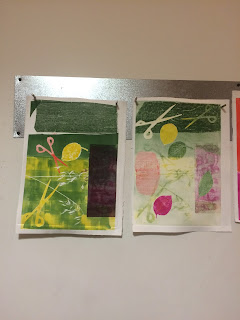 Monday night was the final session of my monotype class.  I'm absolutely fascinated by the process but there's really no way to do it other than standing and after standing on concrete for three hours I was in physical pain.

I cut a pair of scissors out of graph paper and another from the foam sheet you see in the bottom of meat trays.  I wish I had taken the time to cut some from other materials.  It would have been fun.

The term monotype is misleading because you get more than one image from an inked plate, though you're free to amend the plate with more materials and other ink and in doing that I got six prints out of the night.  I wouldn't have chosen these colors for myself but they're the ones the class got out, and after all, I can learn with any color. 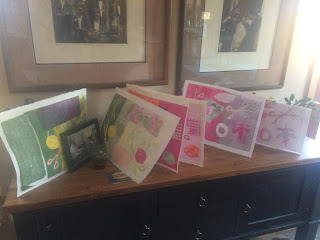 I don't have any place to hang wet prints yet so we ended up "enjoying" them for a couple of days until I could put them away. 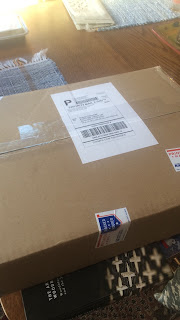 And just a little bit ago our mailman delivered this box right to our door.  It's my first order of woodcut supplies including the wood.  I'm really excited but after I finish blogging I need to start on Thanksgiving prep - it's tomorrow!! 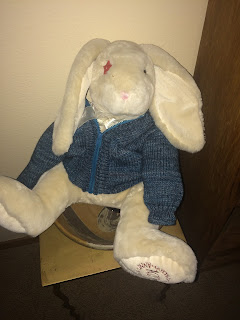 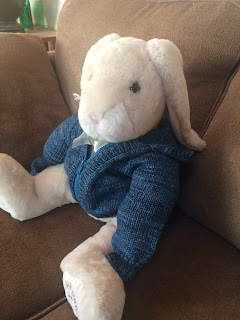 I finished Owen's zippered hoody from Malabrigo superwash.  It's really yummy and will certainly be much cuter on him than on this rabbit.  I've almost finished his sister's sweater too, so after that I can move on to other projects. 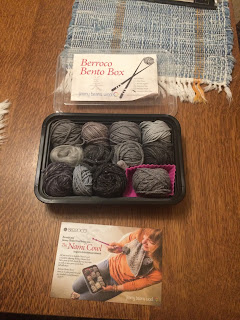 Like this.  The other day I was visiting a weaver who lives near me who is also a knitter.  We had a bit of show-and-share when she handed me this kit, saying she bought it in Denver but really likes to knit her cowls in the round. It's called Berroco Bento Box and when it's assembled it really does look like a bento box.  The kit has had an interesting journey, as the clever designer is a friend from Reno, Kristen Helmreich.

I still haven't tried crackle...but, I remember seeing that article in Handwoven. Maybe in the New Year!!!! I'm glad you have enjoyed your monotype printing class.

When I warp back to front I make two crosses at each end of the warp. The cross I tie on to the back beam is based on the number of ends I put in the raddle (so if it a 1/4" sectioned raddle, and I am denting 20 ends per inch each cross at the back beam will have 5 ends in it. Honestly I find counting out that many ends in a cross difficult so I often do two end crosses or just separate ends the normal way). I Tie each leg of the back beam cross and just tie the waist in the front beam cross. when you get used to making two crosses it doesn't take much longer. I do long warps so the issues of where to make the back cross on the warping board doesn't come up - I always need to use the top and bottom of the warping board.
Happy Holidays