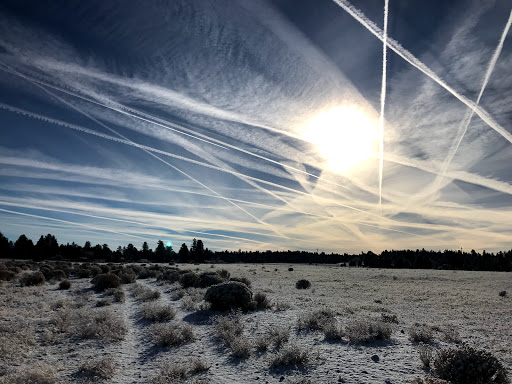 We are having another mild winter so far, just a couple of dustings but finally enough snow in the Cascades that Bachelor Ski Resort was able to open yesterday - finally!  I bought some winter sports gear from the Columbia outlet store and it makes morning walks so much more comfortable.  I was overwhelmed by the overheard activity on this frosty morning.  I’m not sure that jet contrails are healthy for the environment but they were sure pretty that day. 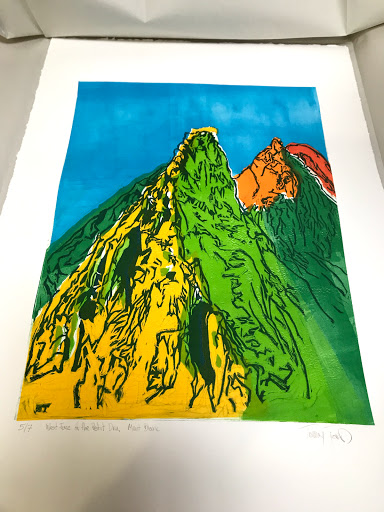 I popped into the Art Center last week to show it off to a couple of visiting friends and was introduced to a young guest artist who had rented space for two days to print his four-plate relief print of Mont Blanc in France.  We chatted briefly about the Gomuban he was using for his relief blocks and because it’s so soft, how easy it is to carve right through it.  We also had a short conversation on tracing techniques.  Nice guy, super handsome.  It wasn’t until a couple days later that I learned that it was Tommy Ford, the Olympic downhill and slalom racer who was here for a couple of days visiting family and to ski Bachelor before returning to his competition in the SuperG in Europe.  Our studio was able to acquire one of the seven prints which will be used as a fundraiser a little later. 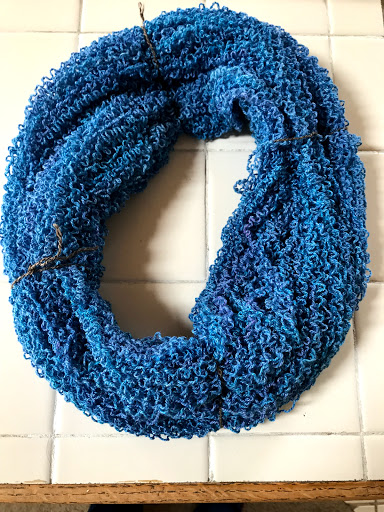 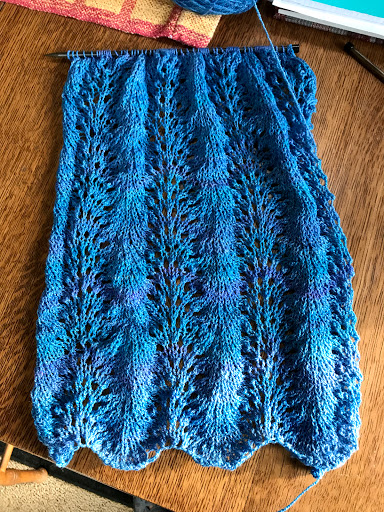 Fast-forward, here is the scarf. I chose a Feather-and-Fan pattern and am really pleased with how the color gradations are showcased.  It’s hundred times better than it was.  I think I must have won the ribbon due to lack of competition. 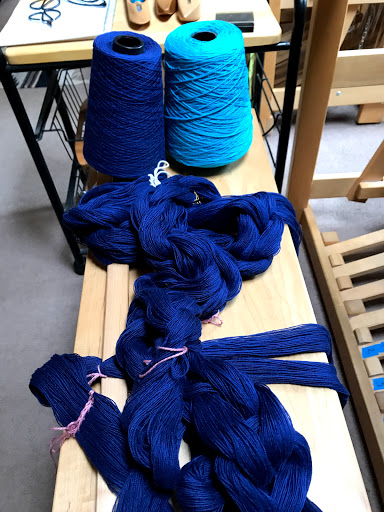 We had some sun this morning so I took the opportunity of natural light to wind a warp from this cobalt blue yarn, a new color to me in weaving.  I going to weave overshot table runners but can’t start until my shuttles are freed up.  I have an Ott lamp I can use for the threading.  I’ve learned the hard way that I make mistakes when I don’t have adequate light when making a warp.  It feels good to have this on standby. 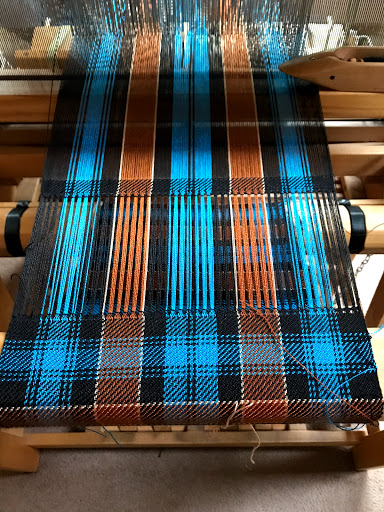 This is what I have to finish first, a Christmas gift for my daughter and a second one for me.  She asked me for the first one I wove, but I put it in the holiday sale with a steep price tag so no one would buy it, and they did.  It’s so pretty, I don’t mind weaving it again. I can’t believe how much fun it is to weave tartans and how easy they are. 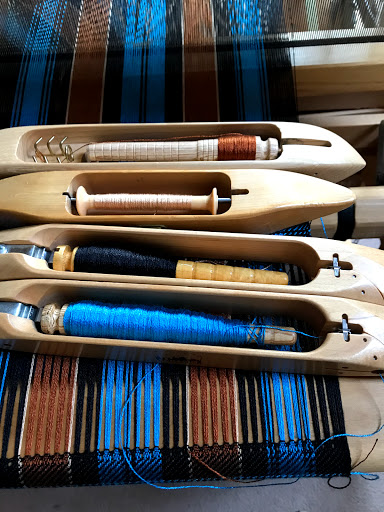 I’m using four shuttles but only the black and blue stay attached.  Before this I had swapped out bobbins when I changed colors.  This is so much faster and easier.  And I’m actually making peace with my Bluster Bay shuttle.  I had planned to sell it to a guild member but am going to keep it for myself. 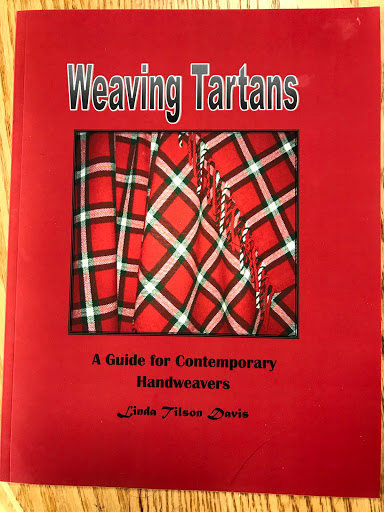 Linda Davis who taught the class I took has recently published a book, which is pretty much her class notes.  I wasn’t sure if I needed it but it’s only $12 on Amazon and I’m so glad I bought it.  There are some shortcuts and tips that I had forgotten.  She also gives tips to help you match your patterns if you weave cloth to sew, and I might just do that.
In proofing this post I couldn’t help notice how much blue is in my life.  And of course, my daily wear starts with blue jeans.  How could I have not noticed that before?!!
Posted by Sharon at 3:54 PM

Lovely blues; I'm glad it's not your mood!