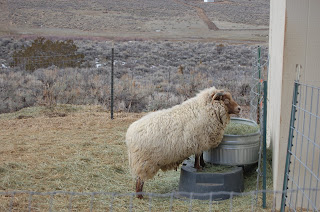 I took this picture yesterday so I could reference the size of Mickey's fleece. His fleece was awarded reserve grant champion at the state fair a couple of years ago and I wanted a record since he's getting sheared tomorrow. 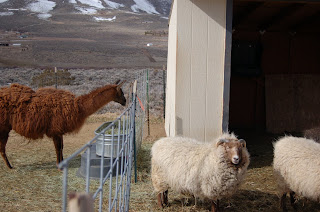 Last night the wind blew so hard that I got up at one point to make sure the French doors were locked because they were rattling. It blew so hard that the animal shed was moved 1 1/2 feet north, as the picture shows. Son Josh built it five years ago and it hasn't moved since, until last night. The verdict is in - March came in like a lion. 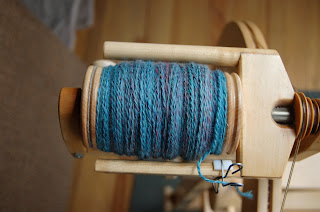 This is so pretty. It's from Mim and is the last of my dyed rovings. Becky thinks she'll be down in a couple of weeks to pick up a wether from Mim, and we're planning to make color if that happens. In the meantime, I'm back to spinning white.
Posted by Sharon at 5:10 PM

Lovely shot of Mickey and lovely bobbin of yarn!

so, how did you get Mickey to pose? Funny you should write about the March lion in your lamb post!

The wind blew here also Sharon, I dont think my shed moved though! Of all the things I love about this state, the wind isnt one of them.
The lion thing bodes well for us, means the end of March will be comparetively calm, right? (HA!)