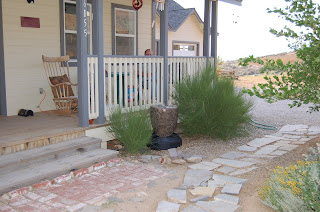 Look what I bought at Costco yesterday. We have been talking about a fountain and I told Ian about the one I had seen last week. I ran down on my lunch hour to buy a bag of onions to split with a co-worker and discovered that in one week, they had sold almost all the fountains. I texted Ian that I would be late and went back after work to snag one for us. There were even fewer by then. I was sure that I could wrestle the 60 pound box but found eager volunteers to help all the way - not store employees - just nice people. I drove away with a warm heart. It turns out that the box was only one inch shorter than the rear of my car. Phew~ Ian is sitting on the porch. See him? 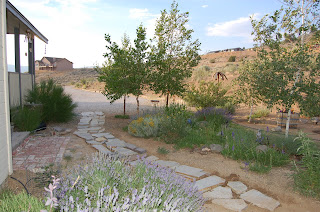 I drove to work this morning in more choking smoke from the California wildfires, but was delighted to see our beautiful Nevada sky this evening. Note how well our palm tree is growing - it's the scarecrow for the tomatoes. 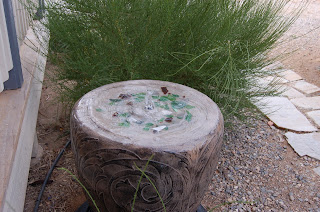 Ian was telling me that the instruc-
tions suggested putting decorative rock in the top and bottom basins. Instead I put in is some glass that I had tumbled. It's from the trail that I used to run my dogs on when we lived in town. We ran under the road through a culvert and then up onto Peavine Mountain, along the path of a dry creek. They were both German Shorthaired Pointers and my running partners for years. After they died, I scattered their ashes under the willow trees that grew along the dry creek. One day I took a bag on my run and filled it with the broken glass littered along the trail. I thought I would make a wind chime but have instead been looking at them in a clear glass bottle. The trail has since been constructed over and the trees are gone. I love seeing my memories right here in the fountain, along with hearing the lovely sound. 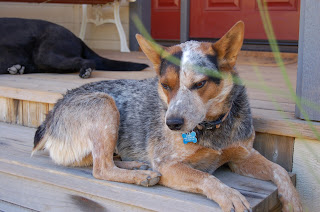 This is the dog that owns me, I mean that I own now.
Posted by Sharon at 8:19 PM

The fountain looks beautiful and fits right into your yard very nicely. I'll bet it sounds heavenly, too!

I love the walk way Sharon, cant wait to see it! It hasnt been clear here forever, still cant see our beautiful mountains through the smoke.

Love the fountain!! The sound of water is so relaxing. The spot where you placed it is perfect!!