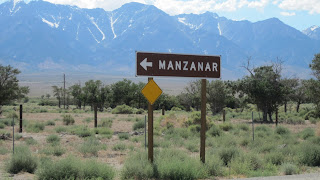 The drive from Oceanside to our house is 11 hours, which is probably doable, but we really needed to clean up after ourselves before leaving Rochelle's house so decided to stop over in Bishop. We made good time from LA on Hwy 395 to Owens Valley. 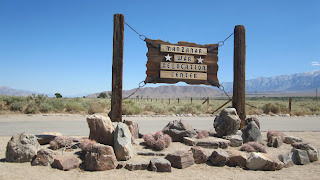 I had a hard time convincing Ian that we really could take the time to stop at Manzanar. It's so easy to get in the mindset of "getting there." Last year cousins Don Don and Scottie stopped on their way to our gathering. Ian went to high school with their dads and Scott's father was born in a relocation center. 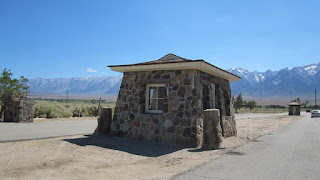 For years we've zipped by and there's been nothing but the sign. Reconstruction has been underway recently as a National Historic Site and it's worth checking out. It you read Hotel on the Corner of Bitter and Sweet, you need to make this stop. 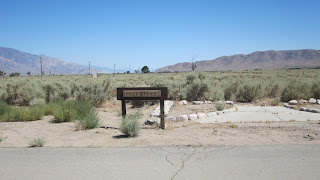 They've created a driving tour so you can see the entire layout. Signs are posted where facilities existed. I had no idea is was so massive, but a total of 110,000 people were "relocated" to ten centers - 10,000 people were assigned here. 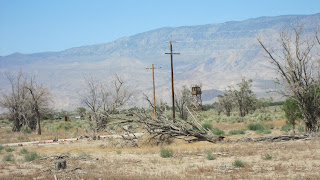 This is a recon-
structed guard tower of which there were six. Two thirds of the people were American Citizens and Ian tells me that the 442 regiment known as Go-for-Broke was fully Japanese American. They suffered horrific casualties and were the most decorated regiment in WW II. We saw photos of families mourning their dead sons. 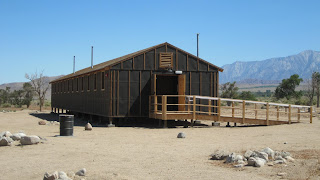 Two barracks have been recon-
structed and will represent how housing was when the internees arrived and how they were adapted after a couple of years. Ian said the reason the building is elevated is so that guard dogs can circulate under the building after the 10:00 curfew to prevent escapes. In the high dessert it also meant that the buildings were brutally cold.

This building represents what their original home was. An intensely private culture, they also were provided with latrines that had no partitions between toilets. I 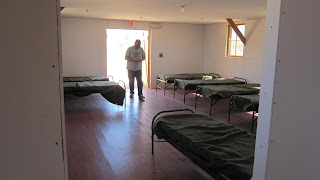 nitially their guards saw them as the face of the enemy and humil-
iation was the order of the day. 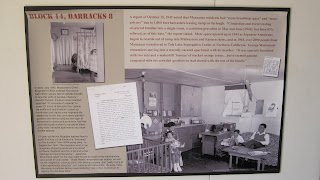 The guards became more helpful in time and found linoleum to cover the floors to stop the influx of frigid air. 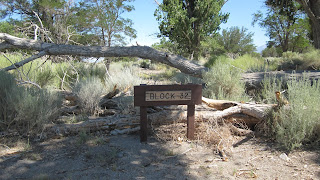 Each block repre-
sented a dozen barracks. Some had the protection of cottonwood trees and many did not. I'm astounded at how three years under these conditions didn't break their spirits. It did for some but many went on to rebuild their lives. Upon release, they had nothing. Everything had been taken away - even their dead. I think the cemetery was the most emotional moment for me.
Posted by Sharon at 8:40 PM

I'm so glad that site is being preserved as a memorial. As with the Holocaust, we should say "Never forget. Never again."

I just read that book this spring - couldn't put it down - thanks for the view of the camp. T.

What a sad story and I'm glad to follow your blog and read about things that happened at the other side of the world. Things we don't know about.
Thank you for this post.

There have been a couple of good non fiction reads about the internment. I have Jamie Ford's book on my Kindle and just haven't gotten there yet.

Such a shameful time in our history, and one that we would do well to remember. My dad recently told me that his parents "held" property for some friends who had been sent to an internment camp. I'm sure it wasn't a big deal to them, but it certainly kept one family from having nothing when they came out.

BTW, Ansel Adams did a project at Manzanar. I know there is a book, but it looks like Library of Congress did an online collection.

What an important time to remember. Thanks for sharing and making this more visible.